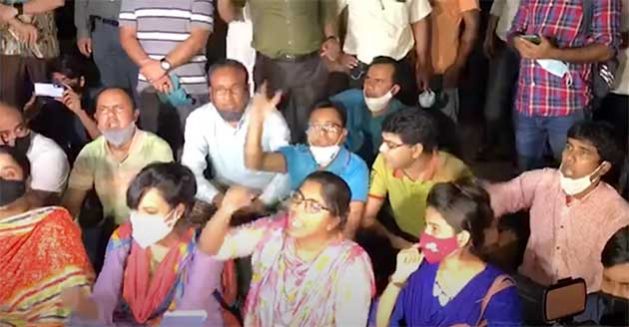 A screen shot taken from Prothom Alo's YouTube channel of Bangladeshi journalists protesting the arrest of the paper's correspondent, Rozina Islam, in Dhaka on May 17, 2021.

NEW YORK, May 18 2021 - The Committee to Protect Journalists today called on Bangladeshi authorities to immediately release journalist Rozina Islam, withdraw the investigation into her, and to stop arresting journalists under the Official Secrets Act.

Islam, a senior correspondent for the daily newspaper Prothom Alo, was arrested today after the Health Ministry filed a complaint against her under the colonial-era Official Secrets Act, according to news reports. She was accused of taking pictures of official documents under sections 3 and 5 of the Official Secrets Act, and under sections 379 and 411 of the penal code, and could face up to 14 years in prison and the death penalty if charged and convicted, according to the laws. Islam is being held at the Shahbagh police station in Dhaka, the capital, Sajjad Sharif, managing editor of Prothom Alo, told CPJ in a phone call.

“We are deeply alarmed that Bangladesh officials detained a journalist and filed a complaint under a draconian colonial-era law that carries ridiculously harsh penalties,” said Aliya Iftikhar, CPJ’s senior Asia researcher. “Bangladesh police and authorities should recognize that Rozina Islam is a journalist whose work is a public service and should immediately drop the case against her and allow her to go free.”

According to the Dhaka Tribune, Islam went to the Health Ministry in Dhaka around 3:30 p.m. today for a meeting with the health services secretary. Islam had been reporting on corruption and mismanagement in the health sector for the past month, Sharif told CPJ.

Islam was initially detained at the Health Ministry, located in Dhaka’s secretariat building—which houses several government offices—for more than five hours before being taken into police custody, Sharif told CPJ. The Dhaka Tribune reported that according to the police complaint, an on-duty police officer saw Islam in the office of Md Saiful Islam Bhuiyan, the personal secretary to the secretary of Health Services Division. Bhuiyan and Additional Secretary Kazi Jebunnesa Begum questioned and searched Islam, and allegedly found files and saw photos of documents on her phone, the Dhaka Tribune reported, citing the police complaint.

Islam denied taking any files from the room, according to the Dhaka Tribune.

According to the news reports, Islam fell ill and fainted during her detention at the secretariat.

Sharif told CPJ that her arrest was likely in retaliation for her reporting on alleged corruption.

The officer in charge of the Shahbagh police station declined to comment when reached by CPJ via phone. Maidul Islam, spokesperson for the Health Ministry, did not immediately respond to CPJ’s request for comment sent via email.