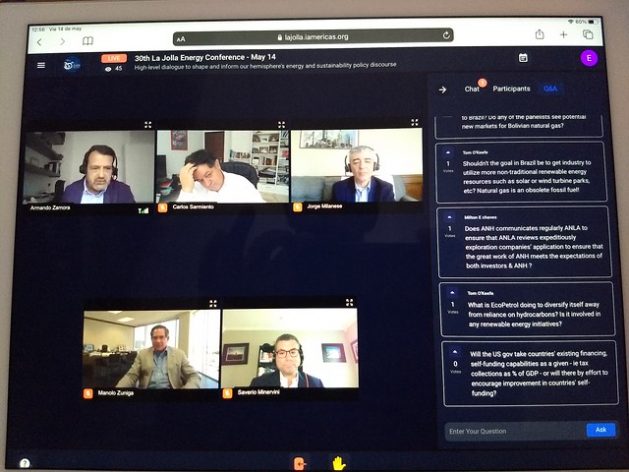 MEXICO CITY, May 14 2021 (IPS) - The gas producing countries of South America are debating on how to make better use of the resource and how to integrate the sector, amid geographical and infrastructural barriers.

The Conference will be held on Wednesdays and Fridays of every week in May and is organized by the Institute of the Americas (IA), which has its headquarters in the coastal city of La Jolla, in the state of California, in the United States. Dedicated to promoting public policies and public-private cooperation in the hemisphere, the IA has energy as one of its main focuses of action.

In the case of Argentina, Juan Bulgheroni, Pan American Energy’s vice president of Upstream Strategy and Planning for that country, highlighted the characteristics of the Vaca Muerta unconventional gas field in southwestern Argentina.

“It has sufficient resources to meet a growing demand. Productivity has increased and costs continue to fall. We have to develop new facilities to control polluting gases and to transport more gas,” he explained.

Bulgheroni assured during the discussions that “Argentina is on the road to recovery, as prices and consumption have returned.”

In 2020, Argentina produced 123.21 million cubic meters (m3) of gas, almost nine percent less than the previous year, due to the coronavirus pandemic.

In the January-February period of this year, gas production totaled 115.31 million m3 per day, a drop of 10.6 percent in relation to the same period of the previous year, in a two-month period in which the pandemic, declared a month later, had not yet broken out.

In late January, Vaca Muerta delivered 26.85 million m³ per day of the fuel, but this productive basin reported a 10 percent drop between March 2020 and the same month of 2021.

That same month the government applied the Plan Gas.Ar, which seeks to encourage investment and domestic gas production to replace imports, and through which the government pays producers for the fluid injected into the national system.

In Brazil, the Gas Law also came into force in April and puts an end to the monopoly of the state-owned Petrobras group in the access and transportation of gas and regulates the transportation, treatment, processing, storage, liquefaction, regasification and commercialization of the molecule.

“We don’t have 20 years to develop our gas resources. We have to do it fast, as there is a lot of unsatisfied demand. Demand is concentrated near production centers, which is an advantage. And we have to see which fuel gas has to compete against,” said Sylvie D’Apote, Brazilian Petroleum Institute’s executive director for natural gas.

The Conference, attended by higher officials, executives and analysts from the region, will also address topics such as the future of transportation, including its electrification; the outlook for hydrogen; energy cooperation between the United States and Mexico; as well as the future of hydrocarbons and the financing of the post-covid economic recovery.

Countries such as Colombia and Peru are also analysing how to extract more gas to increase their domestic market.

Armando Zamora, Colombia’s governmental National Hydrocarbons Association president, the sector’s national regulator and administrator, predicted that investment and production “will go up when companies are authorised to return to work”.

“The expectation is to return to pre-pandemic levels of investment and exploration. This year investment is returning,” he said.

Colombian gas production is already at pre-pandemic levels, at around 1 billion cubic feet per day.

Carlos Sarmiento, Schlumberger’s managing director for Colombia, Ecuador and Peru, said the new Ecuadorian government, which will take office on 24 May, is keen to increase investment in the sector.

“Much of the effort has been made to maintain production. Therefore, a lot has to happen to the legal framework and production strategy, there must be changes to attract investment in exploration, there is the potential and the infrastructure,” he said.

Ecuador extracts some 1.08 million m3 of gas a day, which is insufficient to meet the growing demand.

The common dream of South American gas-producing countries is to consolidate the domestic market and build an exploration platform. But this goal faces several barriers.

Argentina’s Bulgheroni highlighted opportunities in petrochemical production, for plastics, and urea, for fertilisers. “The best domestic product is to export. Many of the internal barriers will be overcome, but there is a need to invest in pipelines. There is a bottleneck to extract and transport more gas,” he said.

For Brazil’s D’Apote, there are opportunities for gas in the fertiliser industry, but there are “infrastructure and price barriers”.

One strategy is to build regasification plants for liquefied gas (LNG), imported mainly from the United States, and connected to South American gas pipeline networks.

Decio Oddone, CEO of Brazil’s Enauta, concluded that gas integration is not possible because a country’s internal problems impact the supply of the entire network.

“What I see now is that since LNG is available, it defines prices. If Bolivia or others want to be competitive in Brazil, they have to compete with LNG. I don’t see the need for pipelines,” he said.

For Oddone, “Brazil can become a gas exporter, but first it has to develop the domestic market, which can be more attractive than the foreign market”.

Sarmiento questioned that there has been little exploration in Ecuador. “We have many opportunities for integration. For example, using Ecuadorian oil in a Peruvian refinery or developing fields in southern Colombia, using Ecuadorian infrastructure,” he said.

Saverio Minervini, FitchRatings’ director of Latin American corporationst, predicted that regional integration will incorporate LNG, but “there are political risks and geographical and engineering challenges”.