STOCKHOLM / ROME, Jun 9 2021 (IPS) - In February the killing of the Italian ambassador, Luca Attanasio, in the vicinity of the Virunga National Park in eastern Democratic Republic of the Congo, did for a short while put the global spotlight on this troubled area, where warfare, poverty and general insecurity generate immense human suffering. 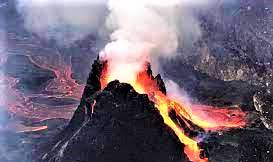 On the 22nd of May, the same area was afflicted by one more disaster – Mount Nyiragongo erupted. This huge volcano is located 20 kilometres north of the town of Goma and 10 kilometres from the border to Rwanda. A lava stream reached the airport and threatened the city centre of eastern Goma. Authorities urged all residents to evacuate the town – it has half a million inhabitants – causing thousands of people to leave their homes. At least thirty persons died during the chaos. The humanitarian crisis continues unabated. More than 230,000 displaced people are currently crowding small towns and villages around Goma. Lack of clean water, food and medical supplies are in many places, within and outside Goma, creating catastrophic conditions.

Scientists worry about a lack in precise monitoring data and a plausible second eruption. Earthquakes continue to shake the area, while cracks are opening up, revealing red-hot lava, evidence that magma is accumulating beneath the ground. Developments are monitored by personnel from the Goma Volcanic Observatory (GVO). However, after the World Bank in 2020 decided to terminate its contributions, the observatory is functioning under strained conditions.

In another part of the world, on Iceland, the volcano Fagradsfjall is since mid-February 2021 erupting intermittently, emitting a steady stream of lava, which effusion rate recently increased to approximately 12.4 cubic metres per second. Thankfully is the Reykjanes peninsula, where Fagradsfjall is situated, sparsely populated. However, this does not mean that volcano eruptions in remote areas do not affect people living far away from them.

In 2010, a series of minor eruptions of the Icelandic Eyjafjallajökull emitted a dust cloud which across western and northern Europe caused disruptions to air travel. For a period of six days the invisible ash was putting a complete stop to all flights. In 2004, a rupture in the earth crust along an undersea fault between the Burma Plate and the India Plate caused massive tsunami waves that devastated coastal areas along the Indian Ocean. At least 228,000 people died from the immediate impact of the tsunamis followed by other deaths due to the hardship they caused.

This catastrophe made me remember a visit I eight years earlier made to the Volcanological and Seismological Observatory of Costa Rica (OVISCORI-UNA). The walls of a room were lined with seismographs, which writing needles quivered incessantly while measuring seismic activities along the San Andreas Fault and Mexican-Central American volcanoes.

The scientists I talked to reminded me that if you compared the earth to an apple, the thickness of earth’s outer crust could be likened to the apple’s skin. The earth’s crust occupies less than one percent of our planet’s volume and is under the oceans just eight kilometres thick and approximately 32 kilometres under the continents. Underneath the crust is extremely hot magma. The earth’s innards are constantly getting hotter all the way down to the innermost core, composed of immensely hot and compressed nickel and iron.

I asked the Costa Rican experts if they could predict an earthquake, or volcano eruption. To my astonishment they answered that it could possibly be done a few minutes before they occur, though this would be far too late for initiating an efficient evacuation of huge metropolises like Los Angeles and Mexico City. The scientists then told me that the San Andreas Fault has reached a sufficient stress level for an earthquake of great magnitude to occur and the risk is increasing more rapidly than previously believed. When I asked them when such a catastrophe might take place, they shrugged their shoulders and stated: “Maybe in ten, twenty years time, maybe earlier, maybe later, no one knows … but the catastrophe will come. We are at least sure about that.”

Humanity appears to be helpless when confronting such catastrophes. Nevertheless, we may be prepared for them by establishing efficient means to take care of the victims, make sure that constructions might withstand earthquakes and avoid establishing settlements too close to volcanos. We also have to take care of our environment and don’t destroy elements that could mitigate the effects of natural disasters. For example, the impact of the 2004 Tsunami on the Indonesian Aceh Province would have been less if huge areas of protective mangrove swamps had not been eradicated to construct fish ponds and shrimp farms.

Since I find myself in Italy it is hard to avoid thinking about the threat constituted by Mount Vesuvius, regarded as one of the most dangerous volcanoes in the world. Not the least since a population of three million people live close enough to be severely affected by an eruption, with 600,000 settled within a zone of extreme danger.

Historically, some of Vesuvius’ eruptions have blanketed southern Europe with ash. Harvests were especially severely damaged in 472 and 1631, resulting in disastrous famine. People living in the fertile agricultural landscape of Italy’s Campania region have genuine reason to be anxious about their health. For decades they have lived on top of potentially lethal toxic waste, illegally and secretly dumped by members of criminal organisations.

Some parts of the crater wall of Vesuvius looks like a geological strata, with layers formed by different types of waste – asbestos from demolished buildings, dioxin-rich chemical sludge, drums of solvent, etc.. Black water forms pools at the bottom of the crater, mixed with stinking, steaming pits of sewage and pitfalls down to sulphuric acid and incandescent magma. Furthermore the bottom of the crater is in most places covered by thick layers of ash and lava from earlier eruptions and it is scary to imagine what might happen when all this ash, trash and dregs through an eruption become dispersed in the atmosphere.

Our disregard for Mother Earth makes me think of a story by Arthur Conan Doyle, the creator of Sherlock Holmes. In 1928, he wrote a short story called When the World Screamed, featuring a brilliant scientist called Professor Challenger. This slightly mad scholar assumes that the earth may be some kind of organism, akin to a giant sea urchin. To prove his theory Professor Challenger contacts two engineers, experts in deep-earth drilling.

They succeed in drilling through the earth crust, reach the mantle and the drill hurts a nerve of Mother Earth. Professor Challenger had thus proved that the earth actually is an organism, but at that very moment our ears were assailed by the most horrible yell that ever yet was heard. […] It was a howl in which pain, anger, menace, and the outraged majesty of Nature all blended into one hideous shriek.

It is a humorous and rather shallow adventure story, though it stays in the mind as a quite poignant reminder that the earth actually is a kind of organism that may be destroyed and hurt by the mindless actions of humans. As earthquakes and volcano eruptions prove, the earth is an extremely powerful and unpredictable entity. We cannot always anticipate how nature will react, but we can mitigate the effects from damage caused by natural disasters by taking better care of our habitat, as well as each other and not, as often is the case, fall victim to greed and rage.

Natural catastrophes are difficult to avoid and mitigate, but much more can be made to address a man-made disaster like the one already prevailing in Congo’s Kivu district. A spectacular cataclysm like an earthquake, or volcano eruption, often awake people’s compassion for the victims – for example did nations all over the world provide over USD 14 billion in aid to regions damaged by the 2004 Indian Ocean Tsunami. Maybe we may hope that the human suffering caused by Mount Nyiragongo’s eruption might increase a commitment to support the eastern areas of the Democratic Republic of Congo to overcome the endemic crisis engulfing this region and finally establish a lasting peace in this troubled and often forgotten part of the world.