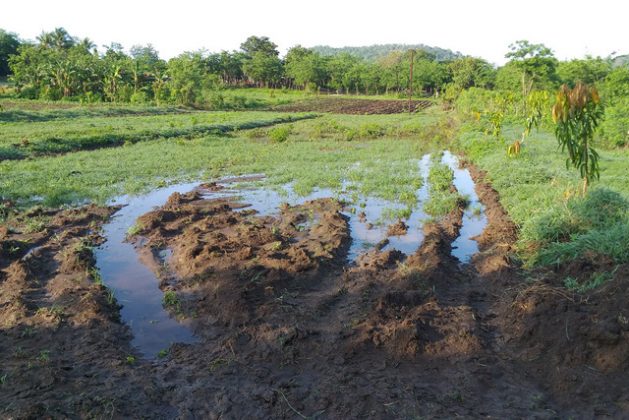 Water sowing includes the construction of low ditches and dikes that slow down the speed at which rainfall runs off the land, stimulate its infiltration into the soil and channel it into ponds for later recovery. The technique gives farmer José Antonio Casimiro, at his Finca del Medio farm in Siguaney, Taguasco municipality in central Cuba abundant water all year round. CREDIT Courtesy of Finca del Medio/IPS

For 28 years, Casimiro and his family have been applying sustainable management methods on their 10-hectare farm called Finca del Medio, located in the center of the long narrow island of Cuba, which is just over 1,200 km long from west to east.

In 1993, when Casimiro and his wife, Mileidy Rodríguez, decided to settle permanently with their children on their grandparents’ family farm, the place was rundown, with severely eroded soils on rough terrain and without fences.

"We have adapted the technique to our situation and possibilities. We place as many barriers as possible to retain the water and make it run as little as possible on the surface, so that it seeps into the ground where we want it to.” -- José Antonio Casimiro

With the aid of tools born of popular inventiveness, and sheer determination, the family is now self-sufficient in rice, beans, different types of tubers, vegetables, milk, eggs, honey, meat, fish and more than 30 kinds of fruit.

The new generations of the Casimiro-Rodriguez family have also become involved in food production and have managed to turn the farm into a model for agroecology and permaculture, as well as for education and the teaching of good agricultural and environmental practices.

Prior to the outbreak of the COVID-19 pandemic, the family farm was visited by tourists taking guided tours where they could interact with the crops and animals, swim in the reservoir, sample organic foods and learn about how a local farm is run.

One of the techniques applied has been water sowing, used for hundreds of years in communities in southern Spain and South America’s Andes mountains, in order to reduce rainfall runoff into rivers and seas and preserve part of it for human, agricultural and livestock activities.

“We have adapted the technique to our situation and possibilities. We place as many barriers as possible to retain the water and make it run as little as possible on the surface, so that it seeps into the ground where we want it to,” Casimiro explained to IPS via WhatsApp from the Finca del Medio near the town of Siguaney, Taguasco municipality, province of Sancti Spíritus, some 350 km east of Havana.
The strategy includes the construction of low ditches and dikes that slow the rate at which water drains into the ground, stimulate its infiltration into the subsoil and channel it into ponds for later recovery.

According to Casimiro, in recent weeks “some 200 mm of rain fell and the water has still not left the farm. We have a small reservoir with a capacity of 54,000 cubic meters of water and containment barriers that accumulate thousands of cubic meters more that infiltrate slowly into the ground. “

He said the infiltrated water does not only benefit his farm.

“A farmer on a neighbouring farm has not had to haul water from distant sources since we started using this technique. His well now has water all year round,” Casimiro said. 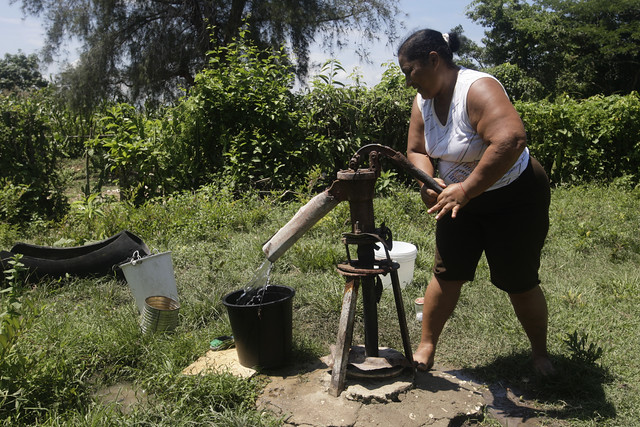 A woman operates a hand pump to draw water for household chores in the Martha Abreu Basic Production Unit community in the central province of Cienfuegos. Projected increased dry periods in Cuba, due to the climate crisis, calls for stimulating initiatives for greater harvesting of rainfall, as well as encouraging the saving and reuse of water. CREDIT: Jorge Luis Baños/IPS

At Finca del Medio, part of the rainwater is collected mainly for domestic use, such as washing and cleaning. Using pumping systems powered by solar panels, wind systems and hydraulic rams, the liquid is pumped from the pond to higher elevations.

“We have more than 100,000 litres of water in tanks, ponds and other places, which is channeled using gravity,” the farmer said.

Casimiro believes it would be feasible to stimulate initiatives for harvesting more rainwater, as well as to encourage water saving and reuse.

Living with the climate crisis

Climate change is not a minor issue for this country located on the largest island in the Caribbean, whose elongated, narrow shape gives rise to short, low-flow rivers dependent on rainfall, which is more abundant in the May to October wet season, and during the passage of tropical cyclones.

With average annual rainfall of 1,330 mm, several studies predict that Cuba’s climate will tend towards less precipitation, higher temperatures and more intense droughts, and that by 2100 water availability could be reduced by more than 35 percent.

“Drought is one of the climatic extremes we face today and it creates a complex situation that requires science, monitoring, innovation and evaluation,” said Science, Technology and Environment Minister Elba Rosa Pérez during a televised appearance in April 2020.

Several of Cuba’s 15 provinces show insufficient rainfall levels, despite being in the middle of the rainy season.

From December to April the rainfall level was only 54 percent of the normal average, which qualifies as a “severely dry” period, explained Antonio Rodríguez, president of the National Institute of Hydraulic Resources, on television on May 13.

Filled to around 25 percent of capacity, the dams in the most critical situation are located in the capital, where 2.2 million of the country’s 11.2 million inhabitants live, said the official. 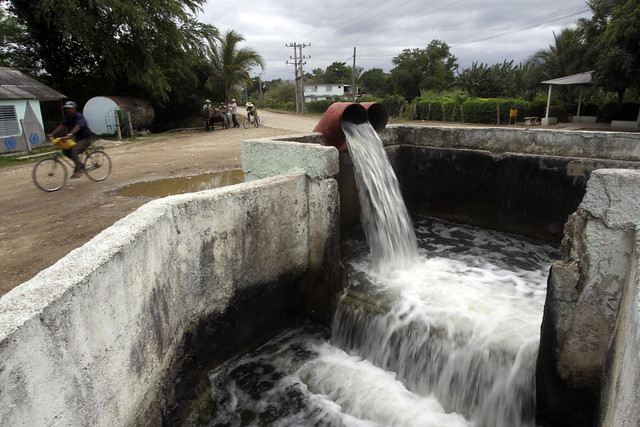 View of a turbine used to pump drinking water in the town of Cauto Cristo, in the eastern province of Granma. In recent years, Cuba has promoted investments to expand and modernise its water infrastructure, with emphasis on more than a dozen water transfers, engineering works considered strategic to divert water over long distances and support agricultural development plans. CREDIT: Jorge Luis Baños/IPS

“We should take better advantage of rainwater. It is very good water for washing, scrubbing and cleaning. I remember that in my childhood many houses had gutters on the roofs to collect rainwater, store it in tanks and use it later. That has been lost,” Asunción Batista, an older resident of the city of Holguín, 685 km east of Havana, told IPS.

The challenge of making better use of water

The island has a storage capacity of more than nine billion cubic meters, distributed in more than 240 reservoirs that together with a network of treatment plants guarantee access to drinking water for more than 95 percent of the population, and supply industries and agriculture.

In recent years, with the support of international cooperation funds, the government has sought to expand and modernise the country’s water infrastructure.

There are more than a dozen water transfers, strategic engineering works to control possible floods and divert water over long distances to support agricultural production, in addition to supplying water to communities and tourist resorts.

However, 42 percent of piped water is still lost due to leaks in the aging pipelines, official data shows.

“An agrarian policy that stimulates and incentivises the sowing of water by farmers could be positive for the country and for families in rural and semi-rural areas,” Casimiro said.

He stressed that “farmers are aware of the effects of climate change, but the cost of what needs to be done to prepare for it is often beyond their reach. The educational level is also low,” the farmer added.

A strategy that provides some inputs and encourages a culture of rainwater harvesting, as well as more rational use, could increase water availability in areas where access to water could be affected in the not so distant future.

The Cuban government has focused on the local level as one of the fundamental aspects of its Development Plan until 2030, while it considers food production a matter of national security.

Since 2017, Law No.124 on Terrestrial Waters has been guiding the integrated, sustainable management of water.

In addition, the country has also committed to meeting the 17 Sustainable Development Goals (SDGs) adopted by the United Nations in 2015, the sixth of which involves access to clean water and sanitation for the entire population by 2030.