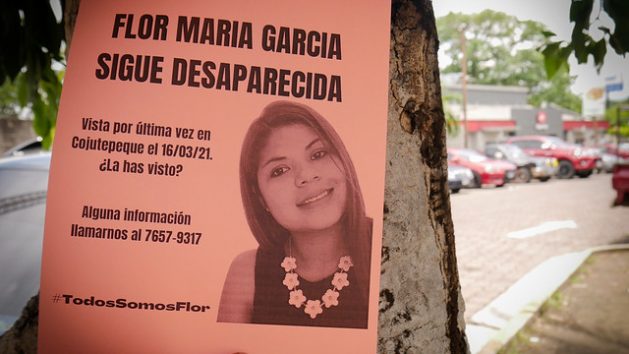 One of the flyers pasted on a tree in the city of Sonsonate, in eastern El Salvador, which on Jun. 28 called for help to find Flor Maria Garcia, 33, missing since March. The next day, the young woman's body was found in a vacant lot near Cojutepeque, the city in the centre of the country where she lived with her husband, Joel Valle, arrested as the main suspect in the case of femicide. CREDIT: Edgardo Ayala/IPS

SAN SALVADOR, Jul 2 2021 (IPS) - The pain that María Estela Guevara feels over the disappearance of her niece Wendy Martínez remains as intense as it was four years ago, when she learned that the young woman, then 31, had vanished without a trace in eastern El Salvador.

“I still feel the same pain, I want to know what happened to her,” Guevara, 64, who has always considered Wendy her daughter because she raised her from a very young age after she was orphaned, told IPS between sobs.

Guevara’s plight is shared by thousands of families in El Salvador who have lost relatives who simply failed to return home one day and were never heard from again.

At least 2,383 complaints of missing persons were reported in 2019, against 2,457 in 2018, according to the report Desaparición de personas en El Salvador (Disappearance of people in El Salvador), published in April by the non-governmental Fundación de Estudios para la Aplicación del Derecho (Foundation of Studies for the Application of Law – FESPAD). The document covered the period 2014-2019.

The phenomenon has been occurring for years in a highly polarised political context in which the governments in power have sought to downplay the problem in order to show that they are efficiently fighting crime, and the political opposition has sought to draw attention to it.

A grieving process that never ends

Wendy went missing on Sept. 30, 2017 in San Miguel, the capital of the eastern department of the same name. She was studying cosmetology and that day she left at 7:00 a.m. to fix the hair of several clients.

“She said she was coming home again at 11:00 a.m. to give her nine-year-old daughter lunch, but she never returned,” Guevara said. “I kept calling her until 12:00 at night, and she never answered.” 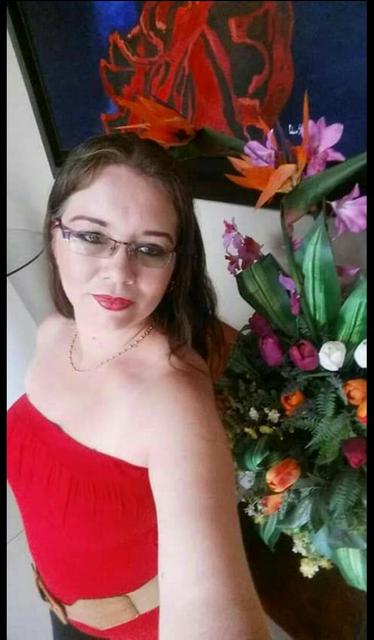 Wendy Martínez’s aunt and daughter have been waiting for her to return since 2017, when the then 31-year-old disappeared without a trace in the city of San Miguel, in eastern El Salvador, after leaving home early one September morning to fix clients’ hair. CREDIT: Courtesy of María Estela Guevara

Disappearances – nothing new in El Salvador

The phenomenon of disappearances is not new in this Central American country that was torn apart by a bloody civil war between 1980 and 1992, which left some 75,000 dead and 8,000 missing.

In the wake of the armed conflict, El Salvador has experienced a maelstrom of violence, mainly at the hands of youth gangs that over time have grown into powerful organised crime groups that control significant chunks of territory in this poverty-stricken country of 6.7 million people.

Gangs have historically been behind many of the cases of missing persons, as they attempt to leave no evidence of their crimes, said analysts consulted by IPS, but without ruling out the involvement of other actors in recent years.

“There is certainly a high probability that this pattern (of gangs) will continue,” lawyer Zaida Navas, legal head of State of Law and Security at Cristosal, an NGO that works to defend human rights in Central America, told IPS.

She added: “But disappearances are also the result of murders in cases of femicide, and executions by organised crime groups that are not necessarily gangs, and also due to personal disputes.”

One of the latest femicides was the high-profile case of Flor María García, 33, who had been missing since Mar. 16.

That day, her husband Joel Valle reported to the authorities that Flor María was missing. According to him, she had left home early in Cojutepeque, a municipality in the central department of Cuscatlán, to head to the capital, San Salvador.

Valle, a dentist, said Flor María had gone to pick up materials for the dental clinic where she worked as his assistant.

But in a twist to the case, authorities arrested Valle on Jun. 25 as the main suspect in his wife’s disappearance, and charged him with the crime of disappearance of persons.

“We always had doubts about him; we as Flor’s family knew that she suffered psychological and economic violence in her home,” her brother, Jorge Garcia, told IPS a few days after Valle was arrested.

He added: “We found it strange that the day she disappeared, he, Joel, only sent us a WhatsApp message at about 7:00 at night, asking if she was with us, in Sonsonate,” the city where Flor María was originally from, in the west of El Salvador, and where her family still lives.

The authorities found Flor María’s remains on Jun. 29 in a vacant lot on the side of the road near Cojutepeque, under tons of dirt and gravel.

The charges will be changed from disappearance of persons to femicide, the authorities said.

“I should have warned my sister, I should have insisted that she leave him when the incidents of psychological and economic, and even physical, violence occurred,” Garcia added.

It is no consolation, but Flor María’s family will be able to give her a religious burial and begin the mourning process.

However, many other families have no sense of closure, as long as their relatives remain missing.

Given the strained relationship between the government of Nayib Bukele and his political opponents, the issue of missing persons has once again gained national prominence, with the president defending his security programme, the Territorial Control Plan, as the reason for the drop in murder rates.

But his opponents say that while it is true that homicides have declined, cases of missing persons are on the rise.

According to government figures, homicides have dropped significantly since Bukele took office in June 2019 and began to implement the plan.

When the government took office, there were 50 murders per 100,000 inhabitants in El Salvador, a rate that has dropped to 19 per 100,000, said Minister of Justice and Security Gustavo Villatoro in a television interview in March.

But establishing how many people are missing in the country, and whether the number is increasing, decreasing or remaining steady when comparing time periods, is not an easy task, said analysts consulted by IPS.

This is true above all because there is no official census of cases, but three separate institutions keeping track of figures that are sometimes in line with each other and sometimes quite different: the National Civil Police, the Attorney General’s Office and the Dr. Roberto Masferrer Institute of Legal Medicine, and each one handles its own data based on the complaints received.

“I think the most honest – although I don’t know if the most rigorous – answer is that the official figures allow us to conclude that we have a partial view of reality, historically,” lawyer Arnau Baulenas, legal coordinator of the José Simeón Cañas Central American University’s Human Rights Institute, told IPS.

He clarified that he was not only referring to the current Bukele administration, but that this has been a problem for decades.

A report by the Efe news agency, based on official figures, stated at the end of May that in the first four months of 2021, reports of missing persons had increased by 112 percent compared to the same period in 2020, climbing from 196 to 415.

“But it is very difficult to assess whether the increase in complaints filed actually means there are more cases, because there is a counterargument: that people are reporting cases more because they see that the authorities are taking action,” Baulenas said.

He added, however, that “Such a sharp rise would indicate that disappearances have indeed increased.”

Bukele, for his part, said on Mar. 26 that as homicides have gone down, investigators are better able to investigate other crimes.

“It is not the same to investigate 40 homicides as three homicides a day,” he said in reference to the drop in the daily murder rate.

Meanwhile, María Estela Guevara does not lose hope of one day finding out what happened to Wendy on that day in September 2017.

“Her little girl is now 13 years old, and she still has hopes that her mom will come home, she tells me not to remove things from Wendy’s room, in case she comes back,” said Guevara with a heavy voice.