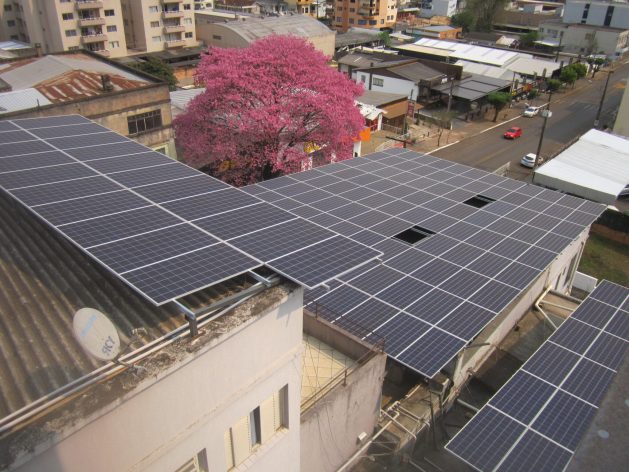 Solar panels cover the rooftop of a hotel in the southern state of Santa Catarina - an example of the distributed generation of electricity that has been expanding widely in Brazil in the last decade, thanks to a resolution by the regulatory agency that encourages consumers to generate their own electricity, as part of the changes in the country's energy mix. CREDIT: Mario Osava/IPS

RÍO DE JANEIRO, Sep 8 2021 (IPS) - As most of the world seeks to modify its energy mix to mitigate climate change, Brazil has also been forced to do so to adapt to the climate crisis whose effects are being felt in the country due to the scarcity of rainfall.

It will be hard to avoid blackouts, or even perhaps electricity rationing, by October or November of this year as a result of the declining water level in reservoirs in the southeast and midwest regions, which account for 70 percent of the country’s hydroelectric generation capacity.

“The crisis did not start this year, it has dragged on for almost a decade,” said Luiz Barata, former director general of the National Electric System Operator (ONS) and current consultant for the Institute for Climate and Society. “The climate has changed the rainfall regime, which will not go back to what it used to be. Droughts are no longer periodic and spread widely apart; they have to do with deforestation.”

The ONS is an association of generation, transmission and distribution companies, together with consumers and the government, which coordinates and oversees the entire structure that ensures electricity in this South American country of 214 million people.

As a result, what happens to the rainfall has a strong impact on national life, because of the environmental, climatic and energy effects.

The regions hardest hit today suffered severe droughts in 1999-2002 and 2013-2015, and the phenomenon could be repeated in 2021, said Barata, an engineer who worked in three state-owned companies in the sector and since 1998 has served in various management posts, including as ONS director general from 2016 to 2020.

The southeast and midwest of Brazil are the main recipients of the moisture carried in by the winds – the so-called “flying rivers” that originate in the Amazon rainforest, according to climatologists. The current drought is reportedly a consequence of deforestation, which already affects nearly 20 percent of the Amazon jungle.

But water shortages are affecting almost the entire country. The northeast, which is semi-arid for the most part, experienced its longest drought since 2012, six years all together and even longer in some areas. 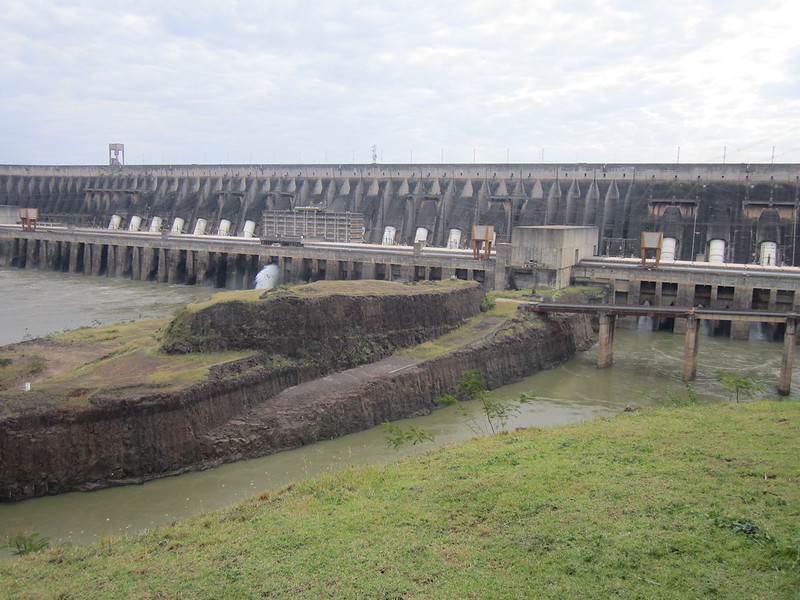 View of the Itaipú hydroelectric plant shared by Brazil and Paraguay on the Paraná River, which forms part of the border between the two countries. In years of abundant rainfall it is the largest power plant in the world. With an installed capacity of 14,000 MW, it is much smaller than China’s Three Gorges, with a capacity of 22,400 MW. But this year the Itaipu dam’s generation will fall sharply due to drought. CREDIT: Mario Osava/IPS

Brazil lost 15.7 percent of its territory covered by water, the equivalent of 3.1 million hectares, between 1991 and 2020, according to a satellite imagery study by the Brazilian Annual Land Use and Land Cover Mapping Project known as Mapbiomas, a network of non-governmental organisations, universities and technology companies.

The minister of mines and energy, retired admiral Bento Albuquerque, acknowledged that global warming was a factor in the gravity of the water crisis that is threatening the power supply. But the minister forms part of a government that denies climate change, as well as the need to preserve forests and the environment overall.

Brazil is experiencing “the worst drought in its history,” he said in a message to the nation on Aug. 31 to announce incentives to reduce consumption during the peak demand period – between 17:00 and 21:00 hours – by means of discounts on the electricity bill.

But the real push for savings is a gradual rise in the electricity bill by the government since May, when dry season began with reservoirs at critical levels, similar to those of 2001, when Brazil had to resort to heavy rationing to avoid an energy collapse.

At that time, hydropower was overwhelmingly predominant, accounting for more than 85 percent of the electricity consumed in the country. 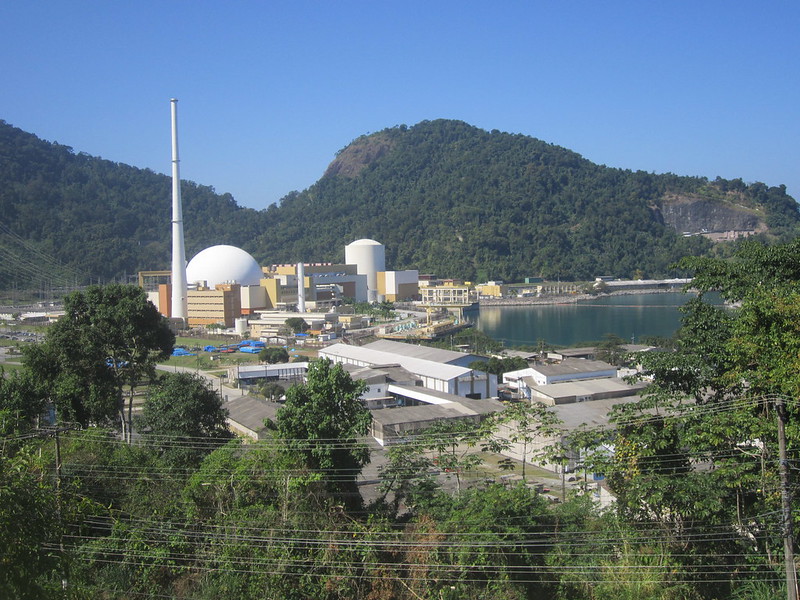 Angra 1 and 2, the two nuclear power plants currently in operation in Brazil, in a coastal locality 150 km south of Rio de Janeiro, have a capacity of 640 and 1,350 MW, respectively. Angra 3, under construction intermittently since the 1980s next to the first two, will have the same capacity as Angra 2. CREDIT: Mario Osava/IPS

There were very few thermal power plants. Since then, various administrations have fomented construction of thermal plants, boosting energy security to the detriment of the environment by increasing the use of fossil fuels, and of consumers, by raising the cost of electricity.

The increase is due to the greater use of thermal power plants and also to the importation of electricity from Argentina and Uruguay, the minister said. The cost is sometimes ten times that of cheaper sources, such as hydro, wind and solar.

To reduce consumption, and thus avoid blackouts and the use of more expensive power plants, the regulator ANEEL slapped an additional charge for each 100 kilowatt-hours of consumption, which gradually increased to 14.20 reals (2.75 dollars) as of Sept. 1, up from 4.17 reals (0.77 cents of a dollar) in May.

Brazil’s electricity mix has recently been diversified with the expansion of new renewable sources. Wind power now accounts for 10 percent of the total installed capacity and solar power makes up 1.87 percent, while thermal power, mostly from oil derivatives, rose to 25 percent.

There will probably be enough supply to weather the current drought and water shortage, thanks to this increase in diversified generation, the measures to curb consumption, and an economy that is not taking off as expected after a large part of the population received anti-COVID vaccines.

The authorities rule out the possibility of rationing because the total extension of transmission lines has doubled since 2001, which allows electricity to be delivered where it is needed, and negotiations are underway with large consumers, mainly industrial, to reduce consumption during peak hours. 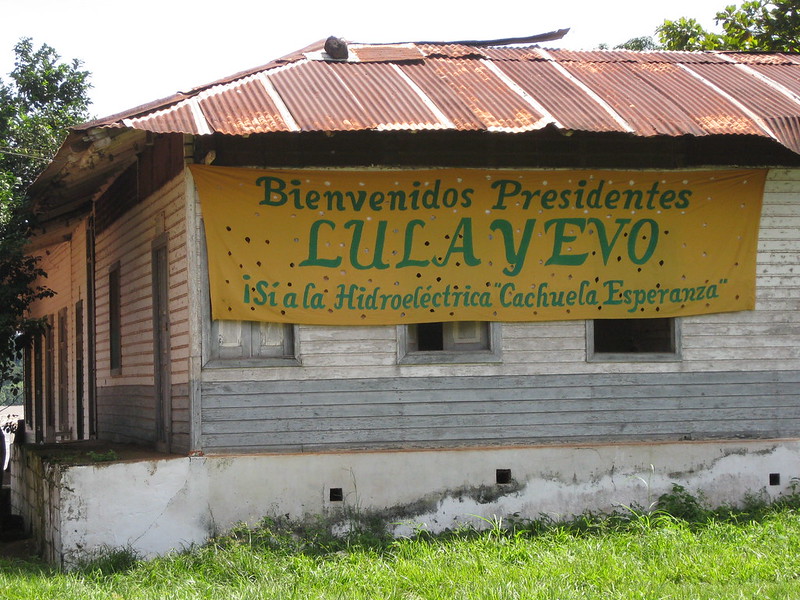 Hydroelectricity is no longer the overwhelmingly predominant source of energy in Brazil, as sources such as wind and solar gain ground. All that remains of some mega-projects are old signs, like this one in Cachuela Esperanza, a Bolivian town where former presidents Evo Morales of Bolivia and Luiz Inácio Lula da Silva of Brazil announced the construction of a large binational hydroelectric plant on the Beni River, which never materialised. CREDIT: Mario Osava/IPS

But the damage, both social and economic, has already been done. “Expensive energy aggravates poverty, hits businesses hard, and drives up insolvency, inflation and unemployment,” Barata told IPS by telephone from Rio de Janeiro.

Moreover, this process is not neutral. Costly energy is a burden for distribution companies that are already facing the negative effects of the pandemic and the evolution of the electricity sector.

“They will probably ask for tariff corrections next year, but since it will be an election year, the government will reject the anti-popular measure,” said Roberto Kishinami, energy coordinator at the non-governmental Institute for Climate and Society.

The administration of far-right President Jair Bolsonaro is not interested in rationing either. “Rationing energy involves planning rational measures, something alien to this government, which has shown little concern for preventing the nearly 600,000 deaths from COVID-19,” he told IPS during a telephone interview, also from Rio de Janeiro.

Given the complexity of Brazil’s electric system and of crisis management, blackouts are likely to occur in limited areas, for which blame can be attributed to specific actors, Kishinami said.

According to Barata: “It is more serious than rationing, because blackouts create chaos in the economy and everyone’s life.”

To avoid this risk and other damage, the expert believes it is necessary to “obligatorily reduce residential and commercial consumption” and thus take pressure off the system.

The medium- to long-term solution would be to “help the water reservoirs recover by means of the expansion of new renewable sources and hydrogen” – that is, with wind, solar and other energy sources meeting a large part of the demand, so that water can be saved, for other purposes as well, such as human consumption, agriculture and river transport, he said.

Barata predicts that wind and solar will lead electricity generation in Brazil in the next decade. Hydropower will become merely complementary, providing security of supply, a role currently played by fossil fuels.

“The world is moving towards renewables; thermal power plants do not solve anything,” he said.