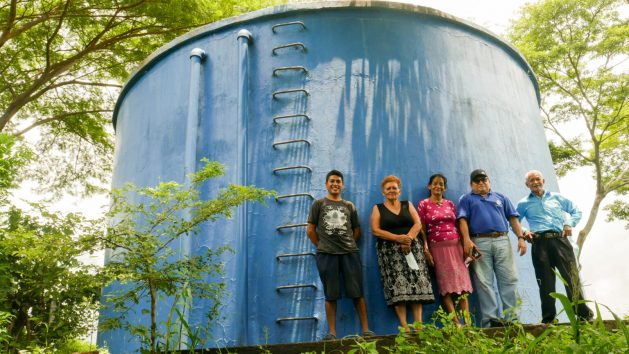 Members of the Cangrejera Drinking Water Association in the Desvío de Amayo village, La Libertad municipality in central El Salvador, stand at the foot of the tank from which water flows by gravity to the nine villages that benefit from this community project. There are an estimated 2,500 rural water boards in the country, which provide service to 1.6 million people. CREDIT: Edgardo Ayala/IPS

LA LIBERTAD, El Salvador , Sep 27 2021 (IPS) - After climbing a steep hill along winding paths, you reach a huge water tank at the top that supplies peasant farmer families who had no water and instead set up their own community project on this coastal strip in central El Salvador.

“It wasn’t easy to carry out our project; building the tank was tough because we had to carry the materials up the hill on our shoulders: the gravel, cement, sand and iron,” José Dolores Romero, treasurer of the Cangrejera Drinking Water Association, told IPS.

The association is located in the village of Desvío de Amayo, in the canton of Cangrejera, part of the municipality and department of La Libertad.

The system, which began operating in 1985, provides water to 468 families in this and eight other nearby villages.

This is what hundreds of rural communities and villages have done to gain access to drinking water, as the government has failed to provide service to every corner of this impoverished nation of 6.7 million people.

Faced with the lack of service, families have organised in “juntas de agua”: rural water boards that are community associations that on their own manage to drill a well and build a tank and the rest of the system.

In El Salvador there are about 2,500 rural water boards, which provide service to 25 percent of the population, or some 1.6 million people, according to data from the non-governmental Foro del Agua (Water Forum), which promotes equitable and participatory water management.

The boards receive no government support, despite the fact that they provide a public service that should fall to the National Administration of Aqueducts and Sewers (Anda). 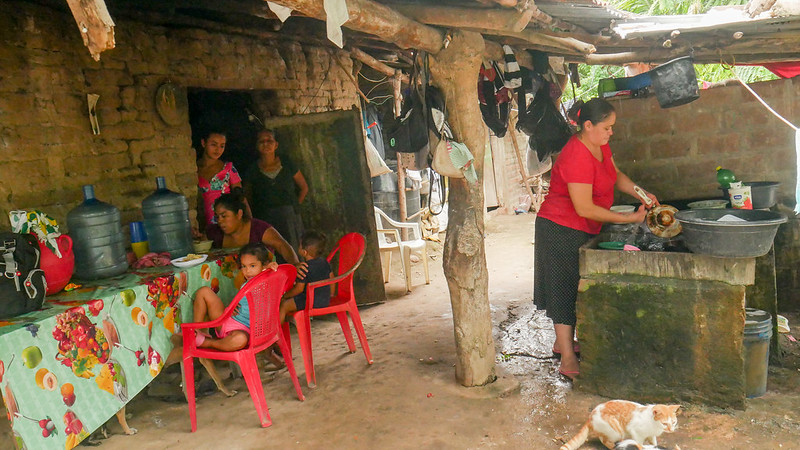 María Ofelia Pineda, 58, washes a frying pan and other dishes she used to prepare lunch at her home in the village of Las Victorias in Cangrejera on El Salvador’s coastal strip. Families like hers benefit from the water provided by the Cangrejera Drinking Water Association, which has been operating for 36 years. For seven dollars a month, the residents of this rural town receive 20 cubic metres of water. CREDIT: Edgardo Ayala/IPS

In the village of Desvío de Amayo, located at the centre of the country’s coastal strip, families used to dig their own wells in their backyards, but the water was not potable, and caused health problems as a result.

“It’s true that when you drill a well here you find water, but it isn’t drinkable, and the springs in the coastal area are contaminated with feces,” said Romero, who along with several other members of the water board met with IPS for a tour of the area.

The water in the tank is made potable by adding chlorine, a task carried out by José Hernán Moreno, 66, who described himself as the “valvulero”, responsible for the tank, which has a capacity of 200 cubic metres.

When there is a mishap with one of the pipelines running to one of the communities, it is Moreno who is in charge of closing the necessary valves.

With a quiet chuckle, he recalled that on one occasion he “killed” some fish that a local resident was raising in a pond, hinting that he may have put in more chlorine than he should have.

“They got mad at me, they blamed me, but my duty is to pour in the necessary chlorine,” Moreno said.

The well drilled by the association is 60 metres deep, and the water is pumped four km uphill to the tank from the village using a pump driven by a 20-horsepower engine.

From there, it is gravity-fed to the nine villages it serves.

“We have water all day and all night, and what we pay depends on how much we use,” one of the beneficiaries, Ana María Landaverde, a 62-year-old mother of five, told IPS. 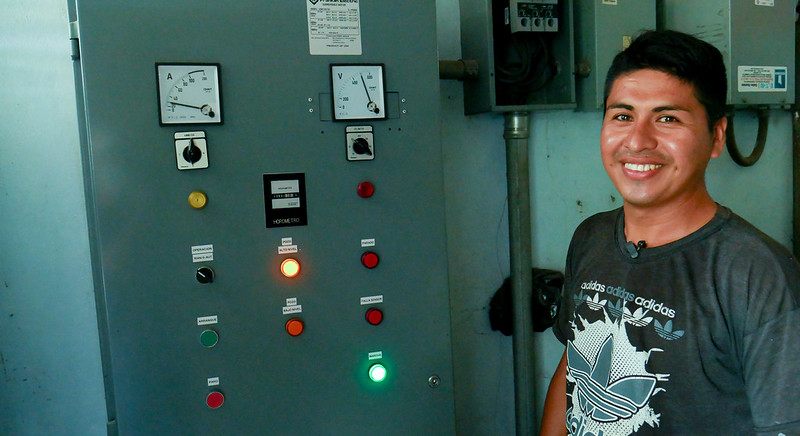 Carlos Enrique Rosales stands in front of the lighting panel of the community water system. He is in charge of maintaining the well, pump, motor and other parts of the system, located in the Desvío de Amayo village in Cangrejera, in the Salvadoran municipality of La Libertad. The project provides water to 468 families in this and eight other villages, which the government does not supply. CREDIT: Edgardo Ayala/IPS

Each family pays seven dollars for 20 cubic metres a month, the equivalent of about 20 barrels or 20,000 gallons. If they consume more than that, they pay 50 cents per cubic metre.

But water was not always available 24 hours a day.

Years ago they received only a couple of hours a day of service because, as there were no metres to measure water consumption, many families wasted water, while others received little.

Some used it to irrigate home gardens and even small fields where they grow corn, beans and other crops.

“Before there was a lot of water waste, that’s why the micro-metres were installed,” said Landaverde. The 20 cubic metres are enough to cover the needs of her family, which now has six members, including several grandchildren.

Since these devices were installed to measure consumption, families have used water more rationally and now there is enough for everyone, 24 hours a day.

“We know that we have to take care of it, with or without metres we have always taken care of it,” Ana Leticia Orantes, 59, told IPS.

She lives in the village of La Ceiba, which is also in Cangrejera. She and one of her sons grow crops like corn, beans, yucca and chili peppers on a 2.7-hectare plot of land.

“This little piece of land gives us enough to live on,” she said.

However, not everyone was happy when the metres were installed. People who were using it irrationally, to irrigate crops for example, were furious, said Romero, the treasurer.

“We had serious problems because they were used to wasting water and suddenly we restricted their water use with the metres, measuring consumption,” he said. “I made a lot of enemies, they almost killed me.”

With the money received for the water service, the association has managed to become self-sustainable, and has the necessary financial resources to pay for repairs and equipment maintenance.

This is important because the system has been operating for 36 years and, as with a car, breakdowns can happen at any time. 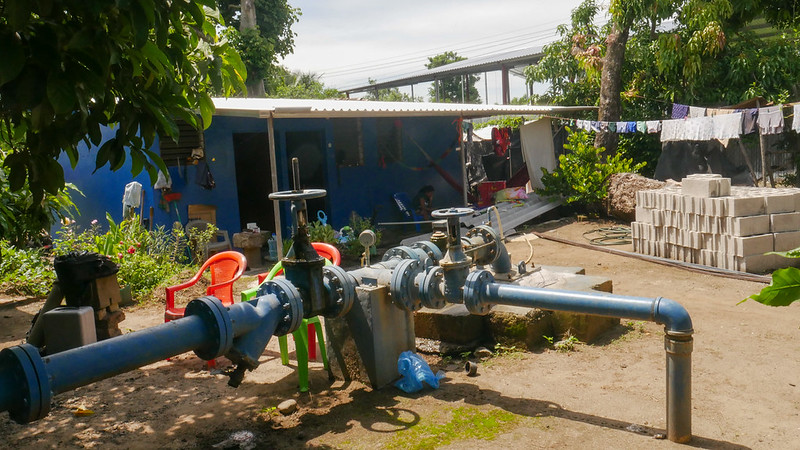 The well of the community water system in Cangrejera, in central El Salvador, is 60 metres deep, and a 20-horsepower motor drives the pump that directs the liquid to a tank four kilometres uphill. CREDIT: Edgardo Ayala/IPS

The Cangrejera project initiative is part of the Association of Autonomous Drinking Water and Sanitation Systems (Asaps), a group of 15 water boards located in four municipalities in the department of La Libertad.

The four municipalities are La Libertad, Huizúcar, Villa Nueva and Santa Tecla. The idea is to support each other when technical or other problems arise.

“There are problems that we can’t solve on our own, we need other people to lend us a hand,” said Romero.

Asaps is also part of a cooperative in which two other community water associations participate, one located in Suchitoto, in the department of Cuscatlán, in the centre of the country, and another in Chalatenango, in the north.

The aim is that through the cooperative, materials and equipment can be acquired at a lower cost than if the associations were to purchase them on their own.

The boards are also part of the Water Forum, a nationwide citizens’ organisation that, among other questions, is pushing for a water law in the country to achieve equitable and sustainable use.

The draft law has been debated in the legislature for more than a decade, but it has stalled over the issue of who should control the governing body: whether only state agencies or representatives of the business community should be included as well.

The latter would include members of the powerful industry of producers of carbonated beverages, juices, beer and bottled water.

The government of Nayib Bukele, in power since June 2019, introduced a new proposal in the legislature last June, and has enough votes to pass it: the 56 out of 84 seats held by the ruling party, New Ideas.

Social organisations and the water boards themselves see the government proposal as a sort of veiled privatisation, since one of the articles grants exploitation rights to private entities for 473,043 cubic metres per year, for periods ranging from 10 to 15 years.

Experts say this amount could supply an entire town.

“How much profit will those barbarians who bottle and sell it make from the water?” complained Romero.

The water boards are demanding to be included in the government proposal, arguing that they play an important role in providing a service not offered by the State.

“We are doing a job that should fall to the government, and what does it give us in return? Nothing,” he added.

María Ofelia Pineda, a 58-year-old native of the village of Las Victorias, also in Cangrejera, said the service received from the community water system changed their lives forever.

“It’s a great thing to have the water right here in the house, we don’t have to go to the river anymore. When it rained we couldn’t go, we were in danger because of the floods,” she told IPS, while washing a frying pan and other dishes she used to make lunch.