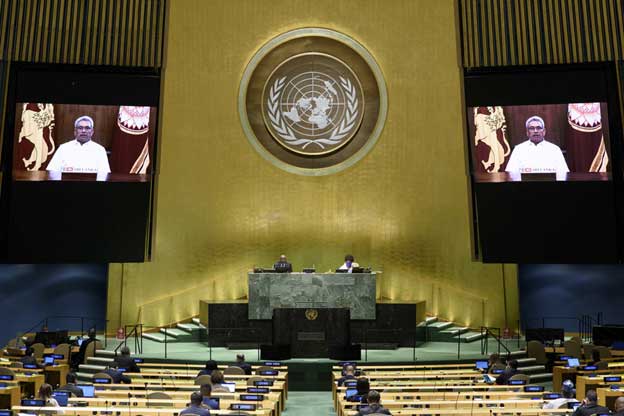 LONDON, Oct 5 2021 (IPS) - Addressing the UN General Assembly last month President Gotabaya Rajapaksa of Sri Lanka raised several concerns, two that had to do with health. One concerned the health of the human race; the other the health of Planet Earth on which man struggles increasingly to survive.

It is understandable for the President to draw the world’s attention to the current pandemic that plagues the people of Sri Lanka as it does the populations of most other nations that constitute the UN family that have struggled in the last two years to overcome COVID-19 which has brought some nations almost to their knees.

As we know some countries have dealt with the spreading virus more effectively and efficiently than others because they relied on the correct professional advice and had the right people in the places instead of dilettantes with inflated egos.

The immediacy of the pandemic with its daily effects on health care and peoples’ livelihoods is seen as urgent political and health issues unlike the dangers surrounding our planet which, to many, appear light miles away while still others treat it with large doses of scepticism.

Quite rightly President Rajapaksa pointed to the dangers ahead for the survival of the planet – as underscored in the recent report of the Inter-government Panel on Climate Change (IPCC) — due to human activity and said that Sri Lanka, among other measures, aims to increase its forest cover significantly in the future.

What really matters is whether those on the ground — like some of our politicians and their acolytes who seem to think that saving the planet is somebody else’s responsibility but denuding the forests and damaging our eco-systems for private gain is theirs — pay heed to the president’s alarm signals that should appropriately have been sounded at least a decade ago.

But what evoked a quick response was not the call for international action to save the people from the pandemic or the planet from climate change as President Rajapaksa told the UN but what he told the UN chief Antonio Guterres at their New York meeting.

While reiterating Sri Lanka’s stance that internal issues should be resolved through domestic mechanisms what aroused interest was the president’s sudden and unexpected readiness to invite the Sri Lankan Tamil diaspora scattered across the Global North and in smaller numbers elsewhere, for discussions presumably on reconciliation, accountability and other outstanding matters.

One would have thought that there would be a gush of enthusiasm from some sections of the Tamil diaspora which had previously shown an interest in being involved in a dialogue with the Sri Lanka Government over a range of issues that concern the Tamil community.

But the few reactions that have been reported from a few Tamil organisations appear lukewarm. Yes, the Non-Resident Tamils of Sri Lanka (NRTSL), a UK-based group, welcomed the President’s announcement saying that “engagement with the diaspora is particularly important at the time when multiple challenges face Sri Lanka”.

However, there was a caveat. The NRTSL is supportive of “open, transparent and sincere engagement of the government of Sri Lanka,” the organisation’s president V. Sivalingam was quoted as saying.

The better-known Global Tamil Forum (GTF) called it a “progressive move” and welcomed it. But its spokesman Suren Surenderan questioned what he called President Rajapaksa’s “sudden change of mind”.

Surendiran said that in June President Rajapaksa was due to meet the Tamil National Alliance (TNA) but that meeting was put off without a new date been fixed.

“When requests are made by democratically elected representatives of Tamil people in Sri Lanka to meet with the President, they are “deferred with flimsy excuses”, {and} now from New York he has declared that he wants to engage with us, Tamil diaspora,” Surendiran said rather dismissively in a statement.

Though the Sri Lanka Tamil diaspora consists of many organisations and groups spread across several continents there has been a studied silence from most of them, a sign that many of them are sceptical about how genuine the gesture is.

The problem for the present administration is that if it is intent on inviting Tamil organisations to participate in talks it would have to lift the existing bans on individuals and groups without which they are unlikely to talk with the government.

As transpired before peace talks at various times between the government and the LTTE, the Tamil groups are most likely to insist on participation as legitimate organisations untainted by bans. That is sure to be one of the key conditions, if not the most important pre-condition.

It is also evident that the Tamil diaspora is not a homogenous entity. It consists of moderate organisations that are ready to resolve the pressing issues within a unitary Sri Lanka, to those at the other end of the spectrum still loyal to the LTTE ideology and demanding a separate state.

If the Government cherry-picks the participants-particularly the ones that are more likely to collaborate with the administration, it would be seen as an attempt to drive a huge wedge in the Tamil diaspora.

That could well lead to the excluded groups strengthening their existing links with political forces in their countries of domicile including politicians in government as one sees in the UK and Canada, for instance, and Tamil councillors in other elected bodies to increase pressure on Sri Lanka externally.

That is why some Tamil commentators already brand this as a “diversionary move” to lessen the international moves against Colombo.

What would be the reactions of powerful sections of the Buddhist monks and the ultranationalist Sinhala Buddhists who strongly supported a Gotabaya presidency?.

And across the Palk Strait there are the 80 million or so Tamils in Tamil Nadu and an Indian Government watching developments with a genuine interest and concern.

Neville de Silva is a veteran Sri Lankan journalist who was Assistant Editor of the Hong Kong Standard and worked for Gemini News Service in London. Later he was Deputy Chief-of-Mission in Bangkok and Deputy High Commissioner in London.