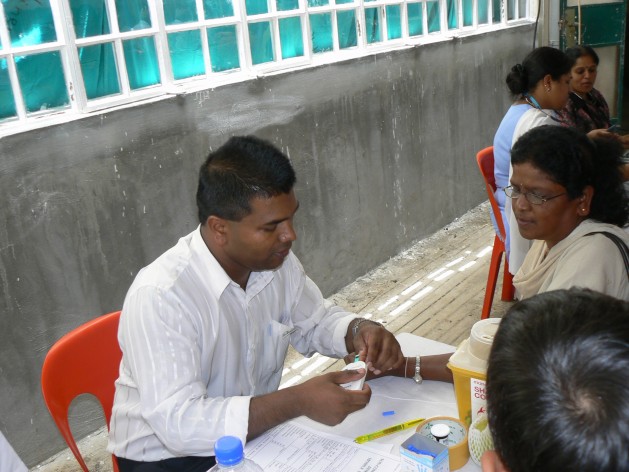 NAIROBI, Nov 12 2021 (IPS) - Although for different reasons, diabetes appears to be one of the few cases that put rich and poor societies at equal footing. In either case, diabetes is caused by wrong, dangerous to health nutritional habits.

In fact, people in industrialised countries tend to consume the so-called “junk food”, while in poor nations diabetes is caused by malnutrition and undernourishment.

And it is a seriously worrying health problem. In fact, globally, an estimated 422 million adults were living with diabetes as of 2014, compared to 108 million in 1980. Since then, the figure has doubled.

The rate at which the global prevalence of diabetes has nearly doubled since 1980 is that it has risen from 4.7% to 8.5% in the adult population.

This reflects an increase in associated risk factors such as being overweight or obese, according to the World Health Organization (WHO).

What is it about?

WHO defines diabetes as a chronic disease, which occurs when the pancreas does not produce enough insulin, or when the body cannot effectively use the insulin it produces. Insulin is a hormone that regulates blood sugar.

This leads to an increased concentration of glucose in the blood (hyper-glycaemia).

Type 1 diabetes (previously known as insulin-dependent or childhood-onset diabetes) is characterized by a lack of insulin production.

Type 2 diabetes (formerly called non-insulin-dependent or adult-onset diabetes) is caused by the body’s ineffective use of insulin. It often results from excess body weight and physical inactivity.

Gestational diabetes is hyper-glycaemia that is first recognised during pregnancy, with blood glucose values above normal but below those diagnostic of diabetes.

The United Nations has repeatedly warned that diabetes is a major cause of blindness, kidney failure, heart attacks, stroke and lower limb amputation.

Why? Hyper-glycaemia, or raised blood sugar, is a common effect of uncontrolled diabetes and over time leads to serious damage to many of the body’s systems, especially the nerves and blood vessels.

The Middle East and North of Africa are among the highest impacted due to wrong diets. In this region, people consume excessive amount of carbohydrates, pastries with high doses of sugar and honey, and very sugary drinks, in addition to incorporating “junk food” in their diet.

Obesity and diabetes: the cause-effect

Overweight and obesity are defined as abnormal or excessive fat accumulation that may impair health.

Body mass index is a simple index of weight-for-height that is commonly used to classify overweight and obesity in adults. It is defined as a person’s weight in kilograms divided by the square of his height in meters (kg/m2).

The World Health Organisation reports the following facts and figures:

According to it, 100 years after the discovery of insulin, millions of people with diabetes around the world cannot access the care they need. People with diabetes require ongoing care and support to manage their condition and avoid complications.

A healthy diet, regular physical activity, maintaining a normal body weight and avoiding tobacco use are ways to prevent or delay the onset of type 2 diabetes.

In view of the above, change in nutritional habits appears to be almost a matter of life or death.