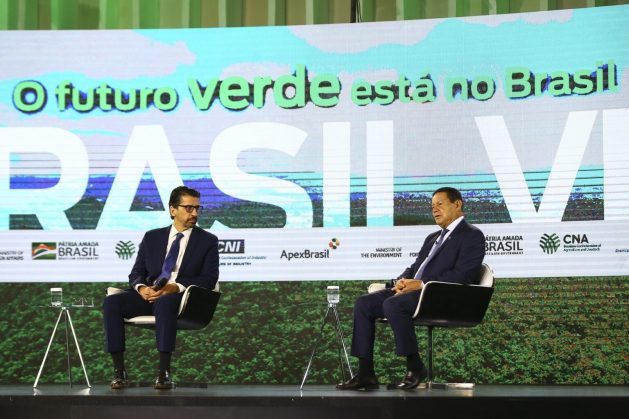 Brazil has a "green future," announced Environment Minister Joaquim Leite and Vice-President Hamilton Mourão, in a videoconference presentation from Brasilia at the Glasgow climate summit, in an attempt to shore up Brazil’s credibility, damaged by Amazon deforestation. The two officials concealed the fact that deforestation in the Amazon rose by 21.9 percent last year. CREDIT: Marcelo Camargo/Agência Brasil-Fotos Públicas

The report by the National Institute for Space Research (INPE) based on the data for the year covering August 2020 to July 2021 is dated Oct. 27, but the government did not release it until Thursday, Nov. 18.

It thus prevented the disaster from further undermining the credibility of far-right President Jair Bolsonaro’s government, already damaged by almost three years of anti-environmental policies and actions, ahead of and during the 26th Conference of the Parties (COP26) to the climate change convention, held in Glasgow, Scotland from Oct. 31 to Nov. 13.

Brazil had managed to reduce Amazon deforestation since the 2004 total of 27,772 square kilometers. A concerted effort by environmental agencies reduced the total to 4,571 square kilometers in 2012. This shows that it is possible, but it depends on political will and adequate management.

The so-called Legal Amazon, a region covering 5.01 million square kilometers in Brazil, has already lost about 17 percent of its forest cover. In a similar sized area the forests were degraded, i.e. some species were cut down and biodiversity and biomass were reduced, according to the non-governmental Amazon Institute of People and the Environment (IMAZON).

Carlos Nobre, one of the country’s leading climatologists and a member of the Intergovernmental Panel on Climate Change (IPCC), says the world’s largest tropical forest is approaching irreversible degradation in a process of “savannization” (the gradual transition of tropical rainforest into savanna).

The point of no return is a 20 to 25 percent deforestation rate, estimates Nobre, a researcher at the Institute of Advanced Studies of the University of São Paulo and a member of the Brazilian and U.S. national academies of sciences.

Reaching that point would be a disaster for the planet. Amazon forests and soils store carbon equivalent to five years of global emissions, experts calculate. Forest collapse would release a large part of these greenhouse gases into the atmosphere.

A similar risk comes from the permafrost, a layer of frozen subsoil beneath the Arctic and Greenland ice, for example, which is beginning to thaw in the face of global warming.

This is another gigantic carbon store that, if released, would seriously undermine the attempt to limit the increase in the Earth’s temperature to 1.5 degrees Celsius this century.

The Amazon rainforest, an immense biome spread over eight South American countries plus the territory of French Guiana, is therefore key in the search for solutions to the climate crisis.

Evolution of the deforested area in the Brazilian Amazon since 1988, with its ups and downs and an upward tendency in the last nine years. Policies to crack down on environmental crimes by strengthened public agencies were successful between 2004 and 2012. Graphic: INPE

Brazil, which accounts for 60 percent of the biome, plays a decisive role. And that is why it is the obvious target of the measure announced by the European Commission, which, with the expected approval of the European Parliament, aims to ban the import of agricultural products associated with deforestation or forest degradation.

The Commission, the executive body of the 27-nation European Union, does not distinguish between legal and illegal deforestation. It requires exporters to certify the exemption of their products by means of tracing suppliers.

Brazil is a leading agricultural exporter that is in the sights of environmentalists and leaders who, for commercial or environmental reasons, want to preserve the world’s remaining forests.

The 75 percent increase in Amazon deforestation in the nearly three years of the Bolsonaro administration exacerbates Brazil’s vulnerability to environmentally motivated trade restrictions.

This was the likely reason for a shift in the attitude of the governmental delegation in Glasgow during COP26.

Unexpectedly, Brazil adhered to the commitment to reduce methane emissions by 30 percent by 2030, a measure that affects cattle ranching, which accounts for 71.8 percent of the country’s emissions of this greenhouse gas.

As the world’s largest exporter of beef, which brought in 8.4 billion dollars for two million tons in 2020, Brazil had previously rejected proposals targeting methane, a gas at least 20 times more potent than carbon dioxide in global warming.

Brazil also pledged to eliminate deforestation by 2028, two years ahead of the target, and stopped obstructing agreements such as the carbon market, in a totally different stance from the one it had taken in the previous two years.

The threat of trade barriers and the attempt to improve the government’s international reputation are behind the new attitude. The new ministers of Foreign Affairs, Carlos França, and Environment, Joaquim Leite, in office since April and June, respectively, are trying to mitigate the damage caused by their anti-diplomatic and anti-environmental predecessors.

But the new data on Amazon deforestation and the delay in its disclosure unleashed a new backlash. 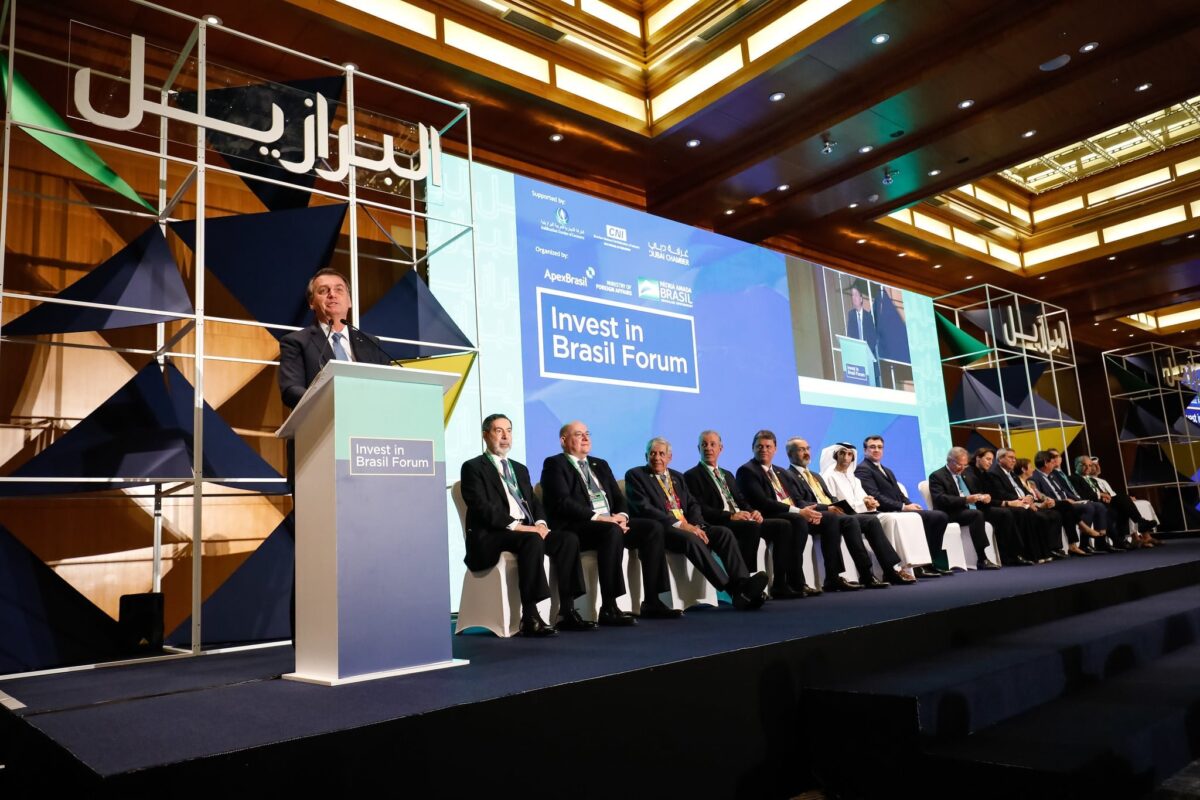 President Jair Bolsonaro stated that the Amazon has kept its forests intact since 1500 and does not suffer from fires because it is humid, in a Nov. 15 speech during the Invest Brazil Forum, held in Dubai to attract capital to the country. He made this claim when he already knew that in the last year deforestation had grown by almost 22 percent. CREDIT: Alan Santos/PR-Fotos Públicas

Leite claimed not to have had prior knowledge of the INPE report, difficult to believe from a member of a government known for using fake news and disinformation. He announced that the government would take a “forceful” stance against environmental crimes in the Amazon, commenting on the “unacceptable” new deforestation figures.

Together with the Minister of Justice and Public Security Anderson Torres, who has the Federal Police under his administration, he promised to mobilize the necessary forces to combat illegal deforestation.

The reaction is tardy and of doubtful success, given the contrary stance taken by the president and the deactivation of the environmental bodies by the previous minister, Ricardo Salles, who defended illegal loggers against police action.

The former minister stripped the two institutes executing environmental policy, one for inspection and the other for biodiversity protection and management of conservation units, of resources and specialists. He also appointed unqualified people, such as military police, to command these bodies.

President Bolsonaro abolished councils and other mechanisms for public participation in environmental management, as in other sectors, and encouraged several illegal activities in the Amazon, such as “garimpo” (informal mining) and the invasion of indigenous areas and public lands.

The result could only be an increase in the deforestation and forest fires that spread the destruction in the last two years. The smoke from the “slash-and-burn” clearing technique polluted the air in cities more than 1,000 kilometers away.

Bolsonaro, however, declared on Nov. 15 in Dubai, in the United Arab Emirates, that fires do not occur in the Amazon due to the humidity of the rainforest and that 90 percent of the region remains “the same as in 1500,” when the Portuguese arrived in Brazil.

His vice-president, General Hamilton Mourão, acknowledged that “deforestation in the Amazon is real, the INPE data leave no doubt.” His unusual disagreement with the president arises from his experience in presiding over the National Council of the Legal Amazon, which proposes and coordinates actions in the region.

Brazil had managed to reduce Amazon deforestation since the 2004 total of 27,772 square kilometers. A concerted effort by environmental agencies reduced the total to 4,571 square kilometers in 2012. This shows that it is possible, but it depends on political will and adequate management.