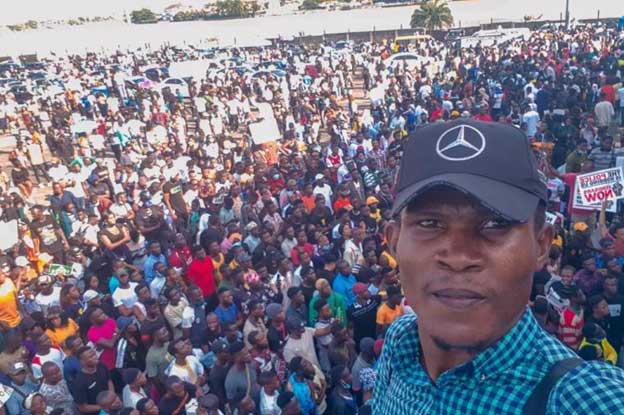 One year after Akpan published the photographs on social media, he planned to display them in Lagos at a museum exhibit marking the anniversary of the protests against police brutality that swept Nigeria late last year.

But he postponed the show indefinitely after receiving two calls summoning him, without explanation, to the local offices of Nigeria’s Department of State Services (DSS), a federal security agency.

“I now sleep with one eye closed, trying to watch my back every second,” Akpan told CPJ in a phone call. “They know I know some things and I have some images…”

The calls came minutes after Akpan gave a live interview on local TV about his work documenting the 2020 protests. Akpan said that he asked the callers for a formal, emailed summons.

He feared that without it, the DSS might mistreat him or hold him for a prolonged period without access to a lawyer or his family, the kind of behavior that CPJ has documented in the past. The calls echoed intimidation tactics he said he faced a year earlier following his posting on social media about the toll gate shooting – tactics that led him to temporarily flee the country.

Reached by CPJ via messaging app, DSS spokesperson Peter Afunanya denied that his agency called Akpan in early October 2021. He also dismissed concerns over the DSS’ history of detaining journalists.

“Right in front of my eyes, I saw dead bodies,” reads the caption on Akpan’s Instagram post from the October 2020 shooting that killed protesters, according to local and international media and rights groups. It was the deadliest incident in last year’s protests, known as the End SARS movement – a reference to the protesters’ call to dismantle Nigeria’s Special Anti-Robbery Squad unit.

Journalists covering the protest movement were beaten, harassed, and fined by law enforcement. One reporter, Onifade Emmanuel Pelumi, was found dead at a mortuary on October 30, 2020; he was last seen alive in police custody after he covered unrest around the protests in Lagos.

Images of the Lekki Toll Gate killings are particularly sensitive, Akpan told CPJ, because they contradict the government’s account. In a press conference, Nigerian Minister of Information and Culture Lai Mohammed marked October 20 this year by calling it “the first anniversary of the phantom massacre,” which took place “without blood or bodies.” Last year the Nigerian army admitted it used live rounds at the toll gate, but said its forces only shot into the air.

After Akpan first published the pictures, he told CPJ that anonymous callers pressured him to take down the Instagram post and replace it with one saying the images were fake. He said his bank account was frozen and that DSS agents arrived at his office looking for him, which DSS spokesperson Afunanya denied.

After that, Akpan decided to heed friends’ advice to leave the country. In the days before he fled, Akpan told CPJ that he believed the images he had captured could contribute to the historical record of the protests. But to protect this evidence for future generations and continue his work, he needed to be safe.

He fled to Ghana by crossing over land through Benin and Togo – a journey of hundreds of miles facilitated by CPJ and Maxime Domegni, an editor with the Global Investigative Journalism Network.

Akpan did not know anyone in Benin or Togo. Nor did he speak the local languages of those two francophone countries. But CPJ introduced him to two local investigative journalists — Igance Sossou in Benin and Ferdinand Ayité in Togo – whose help would prove invaluable.

Sossou and Ayité have both faced reprisal for their work and told CPJ in separate interviews that they agreed to assist Akpan out of journalistic solidarity.

“I understand the risk hanging over journalism in the West African sub-region,” Sossou, who was arrested in late 2019, imprisoned for six months, and fined over social media posts, told CPJ via messaging app. “If you are a journalist who experienced what I experienced between 2019 and 2020 in Benin, you are necessarily sensitive to the case of Eti-Inyene.”

After Akpan slipped across Nigeria’s western border, he met Sossou in Cotonou, Benin’s economic capital. Sossou said he assisted Akpan with changing his money into local currency and finding a car and driver to transport him to Togo’s border, which Akpan crossed on foot before finding a cab to Lomé, Togo’s capital.

Ayité, whose newspaper L’Alternative has been repeatedly suspended and who continues to face harassment by authorities, told CPJ he met Akpan in Lomé. Ayité arranged and paid for Akpan’s dinner and overnight accommodation as well as a motorcycle driver who could safely navigate the border with Ghana the following morning. Once across, Akpan caught a bus from the Aflao border town to Accra.

“We are just journalists and we have no borders. Wherever one of us is threatened, all journalists are concerned,” Ayité told CPJ. “Solidarity must be the cardinal value of our profession and I think that this is what guided Ignace Sossou and my modest self to come to the aid of [Akpan].”

Akpan told CPJ that his travel across Togo and Benin would have been “so difficult, if not impossible” without this assistance. “I would have been attacked or duped,” he said. “It was an amazing collaboration.”

After arriving in Accra, a friend helped Akpan find accommodation. He stayed in hiding for four months but decided to return to Nigeria in February 2021. The stresses of exile, exacerbated by the pandemic, made him struggle with loneliness and depression, he said.

“I felt that there was still work for me to do in Nigeria. These stories [of the protests] still need to be told,” Akpan said, adding that he initially avoided telling his mother and sisters of his return because it would make them worry.

Despite one sister’s advice never to set foot back in Nigeria, he felt that the protests had diminished enough to reduce the risk. But the intimidating calls returned this October, as Akpan promoted his photo exhibition.

Akpan told CPJ that the callers claiming to be DSS agents never sent him an emailed summons, as he had requested. After their calls, he received other calls from people asking him questions about his photography.

He said the people claimed to be potential clients, but when he requested the callers send their details over email, they never followed up, compounding his fears. He said he now takes extra precautions to secure his communications and store his information.

Yet, Akpan has not stopped trying to record historic events. He went out with his camera on this year’s October 20 anniversary to photograph a memorial marking the Lekki Toll Gate killings, where journalists were again attacked by police.

The solidarity he experienced over the last 12 months has given him courage and strengthened his commitment to speaking the truth, he told CPJ. “I rest assured that I’m not alone,” he said.