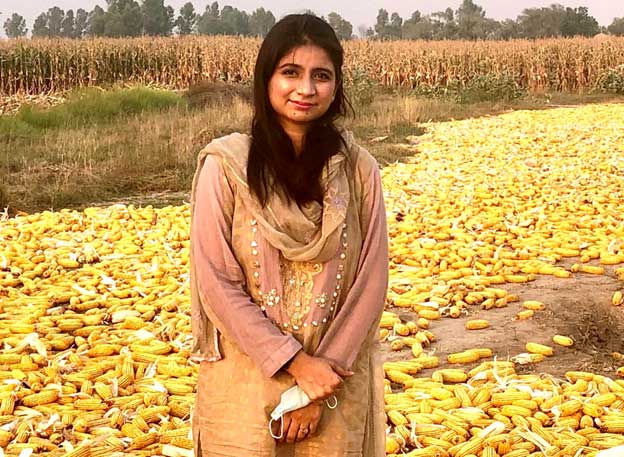 “I belong to a marginalized sector of my country where educated women are confined into four walls in rural settings”. Photo courtesy of Tahir Watto Credit: UN Women

WASHINGTON DC, Nov 29 2021 (IPS) - Many women in Pakistan remain financially excluded. In 2020, only 7% of the female population had a formal account.

One of the reasons for this is that agent networks — the bridge between the cash economy and digital financial services — remain largely inaccessible to many women. Approaching policy and regulation through a gender-intentional lens that considers prevailing social norms can help regulators affect positive change in this arena.

Agent networks are recognized as a powerful enabler for the expansion of digital financial services to low-income populations, particularly in rural areas. They can increase access to financial services by lowering the cost of delivery in otherwise hard-to-reach areas.

Agents can also support women during onboarding and use of digital financial services. However, agent networks are part of a market system deeply influenced by social norms and policies that may perpetuate or exacerbate gender inequalities.

The reality is that women often don’t have equal access to agent banking.

Between 2017 and 2020, the financial inclusion gender gap has not narrowed but rather grown from 13 to 29 percentage points, according to the Financial Inclusion Insights survey. Qualitative field research indicates that this constitutes a major barrier to women’s financial inclusion.

Women avoid dealing with male agents due to social norms that restrict non-familial interaction and mobility. If more women were agents, this may not be such an issue. However, just 1 in 100 agents in Pakistan is a woman.

The same norms that limit women’s use of agents, along with other norms such as restrictions in work outside the home and access to technology, make it difficult for women to become agents.

To better understand these norms and support policy makers and regulators in identifying responses that can advance women’s digital financial inclusion more effectively, CGAP explored the interplay between gendered social norms and the four basic regulatory enablers for digital financial services, including the use of agents.

We started our analysis by identifying the financial behaviors that women currently exhibit in the market and tracked associated social norms and barriers underlying such behaviors. Then we looked at how existing regulations consider the norms at play and address, ignore or even reinforce them.

Analyzing the problem and ideating responses

Using this process, we identified two behaviors related to the issue of women and agents.

The first is that women rarely become agents. Core requirements to become an agent include cellphone ownership, high-school level equivalent literacy, and openness to frequent interaction with an organization’s staff, which is often predominantly men.

However, social norms restrict women’s ability to work outside home, interact with people outside the family, and access technology. The perception that women are at greater risk than men when it comes to issues such as robbery and fraud makes it even harder to find willing and able participants.

The second behavior we focused on was that women avoid dealing with male agents independently. We found that this is largely a result of societal limitations in non-familial interaction and limited mobility.

Taken together, these behaviors present a challenge for women’s financial inclusion: it’s easier for women to engage with other women while using digital financial services, but few women are willing or able to serve as agents.

Up to now, regulations did not explicitly account for these limitations. Key guidelines, such as 2016’s agent acquisition and management framework, do not have a gender angle.

The requirement that all agents have a Level 2 account (the highest tier available) and the associated paperwork is not realistic for many women. It serves as one example of how regulations can unintentionally contribute to the gender gap.

The forthcoming gender-intentional “Banking on Equality” policy is a positive step, and the State Bank of Pakistan has recently taken concrete measures to address the issue.

In September 2021 the State Bank of Pakistan became one of the first regulators globally to introduce a new instruction that mandates a minimum proportion of female agents.

The instruction states that “All Branchless banking providers shall formulate a clear and well-documented ‘Gender Mainstreaming in Agents Strategy’ duly approved by its Board, with a goal to reach 10% women in their agent portfolio by 2024 with interim milestones of 4% for the end of 2022 and 7% for 2023.”

This is a promising measure, but it is largely provider centric. It does not propose regulatory changes to make it easier for women to become agents or address the structural issues that women face in dealing with male agents.

This type of analysis leads to several recommendations for policy makers and regulators, adding an additional dimension to current gender-positive efforts such as the soon-to-be-finalized “Banking on Equality” policy.

To create widescale change, policies and regulations must consider and address the social norms that limit women’s participation in agent banking. Critically, the “right” agent model has the potential to increase women’s access to financial services — especially low-income women — by simultaneously accounting for and possibly shifting social norms. Our suggested responses include:

o Adjusted guidelines for recruiting female agents to make it easier for women to participate, including targets around the minimum percentage of female agents that should comprise the network and collecting sex-disaggregated data on agents
o Changes that could make the prospect of becoming an agent both easier and more attractive to women, such as tiering agents by service type and adjusting know-your-customer (KYC) requirements accordingly
o Introducing steps that would facilitate the contributions agents can make to support female customers, such as requiring the development of female-centric induction programs and ensuring adequacy of financial consumer protection

• Exploring the role that roving agents (permitted during COVID-19) can play in increasing women’s financial inclusion, and considering extending permission for this agent category

By accounting for social norms and being gender-intentional, policy makers and regulators can make adjustments to policy and regulatory formulation to advance women’s digital financial inclusion.

Kathryn Imboden is Senior Financial Sector Specialist at CGAP and Naeha Rashid is a graduate of the Kennedy School of Government at Harvard University, and of McGill University.

CGAP is an independent think tank that works to empower poor people, especially women, to capture opportunities and build resilience through financial services. Housed at the World Bank, CGAP is supported by over 30 leading development organizations committed to making financial services meet the needs of poor people.