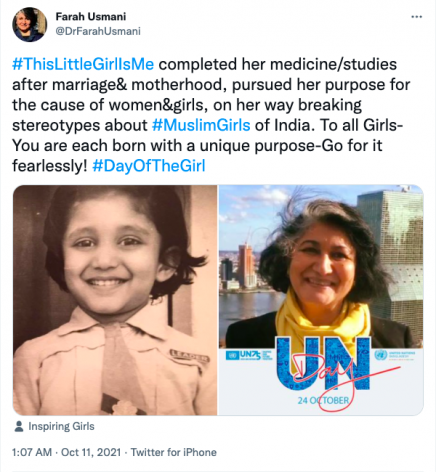 Farah Usmani, a director at the UNFPA headquarters in New York, set about changing the stereotype of Indian Muslim Women. As a result of her efforts a book, Rising Beyond the Ceiling, documents the lives of successful Indian Muslim women. Credit: Twitter

“The idea is to drive a new narrative about the inspiring life some of them lead today.”

Usmani was speaking to IPS in an exclusive interview in Uttar Pradesh (UP) – the largest state in India with a population of about 240 million, of which 44 million are Muslims. Half of the Muslim population in the state are women.

Usmani, a director at the UNFPA headquarters in New York, originates from UP. She wonders how such a large number of people have remained invisible in this day and age of technology.

She said that a chance remark made by a journalist in New York led her to start the Rising Beyond the Ceiling (RBTC) initiative in UP, her place of birth.

The male journalist told her that she was the first Indian Muslim woman he had spoken to in his life. 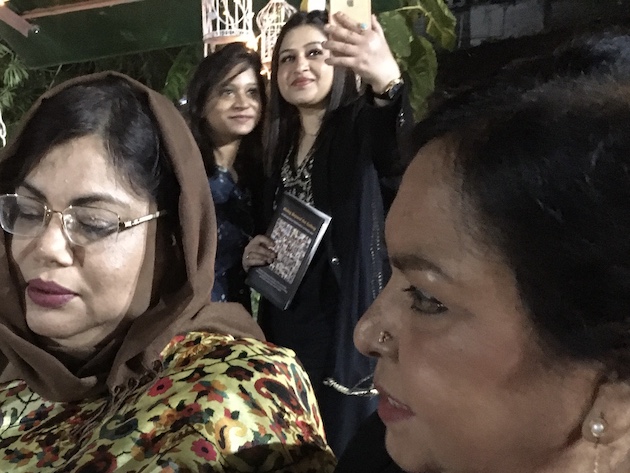 Celebrating the success of Indian Muslim women and the publication of a book, Rising Beyond the Ceiling were (back) computer science engineer Sameena Bano, and drone pilot Mohsina Mirza with (front) educationalist Dr Farzana Madni and biotechnologist Seema Wahab. Credit: Mehru Jaffer

Long after her meeting with the journalist, Usmani could not stop thinking of how millions of Indian Muslims remain unknown despite their creative contributions to society.

Colourful and inspiring images of countless Muslim women she knows flashed across her mind. She decided to share her troubling thoughts with other female friends and family members.

Usmani has over 25 years of experience in policy and programming leadership, focusing on women and girls and their reproductive health and rights. She reached out to like-minded women in UP, and within days a team of six professional Muslim women was formed.

The RBTC initiative is referred to as the team’s ‘COVID’ baby because it was initiated in early 2020 at the peak of the second wave of the deadly pandemic in India.

“Our brief was to work online and to scout and profile 100 Muslim women in UP. The purpose was to document the inspiring lives led by some Indian Muslim women,” Sabiha Ahmad, team coordinator and social activist, told IPS.

The idea of documenting the extraordinary lives of Indian Muslim women was born out of the urgent need to change the stereotypical narrative about women by women.

The team liked the idea of getting women to build an alternative narrative of each other by curating real-life stories of successful Muslim women in all their diversity.

The goal was to make these lives visible and drive a new narrative around Indian Muslim women. The result was a 173-page book. It documents the women from the state who drones and aeroplanes, weave carpets, serve in the police and army, write books and poetry, paint and bag trophies in tennis and snooker competitions.

There are profiles of politicians, trendsetters, doctors, entrepreneurs, and corporate professionals who met in Lucknow recently to celebrate the RBTC book and meet each other in person.

Usmani used her latest visit to Lucknow to release Rising Beyond The Ceiling formally. The directory details the lives of 100 Indian Muslim women whose inspiring stories shatter the stereotypical narrative a group perceived as primitive, veiled and suffering.

Faiza Abbasi, 47, contributor and co-editor, says the RBTC directory dares to write a different story. It is a step by women to celebrate each other.

“We come forward to highlight each other’s achievements and to take the road our grannies left untrodden,” smiles Abbasi.

Abbasi is an educationist, environmentalist, and outstanding public speaker with a popular YouTube channel. She recalls how her father celebrated her birth by distributing sweetmeats to family and friends. However, an elderly aunt questioned the festivities. The aunt asked why the energy and resources were being wasted, and a fuss made over the birth of a girl?

Not used to the relatively progressive environment of today, many women still hesitate to celebrate their achievements.

“We at RBTC want to celebrate and to learn to appreciate each other,” assures Abbasi.

The RBTC promises to branch out its research analysis and documentation to other Indian states to document the successes of Muslim women.

The work of RBTC is vital at a time when the majority of Muslim women in India are the most disadvantaged. Statistical and micro studies on Muslim women show that they are economically impoverished and politically marginalised.