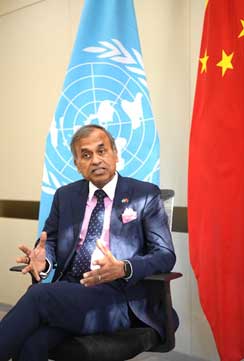 Siddharth Chatterjee: Let me start by echoing the UN General Assembly Resolution 76/13 on “Building a peaceful and better world through sport and the Olympic ideal”. It expresses the expectation that “the Olympic Winter Games Beijing 2022 will be a meaningful opportunity to harness the power of sport to advance the world by fostering an atmosphere of peace, development, resilience, tolerance and understanding, and welcoming all the delegations of National Olympic and Paralympic Committees to participate in the Games.”

At a time when the world is battling against the COVID-19 pandemic, solidari-ty and friendship among nations have never been more important. Let me take this opportunity to commend Mr. Thomas Bach the President of the In-ternational Olympic Committee for his courageous and inspirational leadership. He has said, “Solidarity is not just about respecting each other, but also helping each other and being part of a community,”.

The IOC, the Beijing Organising Committee along with the Government of China have made it clear that preparations for the games are in its final stag-es and are being carried out in a safe and orderly manner, and I support the adherence to all relevant public health measures in response to the COVID-19 pandemic.

It will also be critical for all Member States to observe the Olympic Truce, and ensure the safe passage, access and participation of athletes, officials and all other personnel taking part in the Olympic and Paralympic Winter Games.

Siddharth Chatterjee: I am delighted my boss the UN Secretary-General António Guterres has accepted an invitation from the International Olympic Committee to attend the Beijing Winter Games. I echo his wise words, when he said that “the Olympic spirit brings out humanity’s best: Teamwork and solidarity. Talent. Tolerance.”

The UN has long recognized the contribution of sport for development and peace, and collaboration between the IOC and the UN has played a central role in spreading the acceptance of sport as a means to promote mutual un-derstanding, friendship, tolerance, non-discrimination, and achievement of the Sustainable Development Goals.

The 2008 Paralympic Games in Beijing are a prime example of how the games can affect a society. Winning the right to host the 2008 Games trig-gered action by the Government to improve the lives of people with disabilities and protect their rights as equal members of society. New legislation on ac-cessibility was passed and, in the seven years leading up to the Games, Chi-na spent more than US$ 150 million on making 14,000 facilities accessible throughout the country.

It was during the 2008 Olympic and Paralympic Games, that we also saw a key partnership between UN entities in China, including UN Volunteers and the UN Development Programme and key Chinese volunteer organizations, increasing the impact and elevating the spirit of volunteerism throughout Chi-na.

For the Beijing Winter Games, the UN Volunteers programme along with the UN Development Programme will take part in an innovative project to promote sustainable urban development through volunteer service.

Nelson Mandela once said: “Sport can create hope, where once there was only despair. It is more powerful than governments in breaking down racial barriers. It laughs in the face of all types of discrimination.” The UN family in China is ready to show its support and play its part to ensuring the success of these upcoming games. 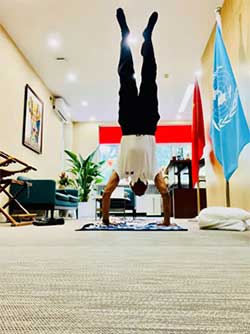 Beijing Daily: This year marks the 50th anniversary of the People’s Republic of China’s restoration of its lawful seat in the United Nations. How do you evaluate China’s influence on the UN and the world over the past 50 years, especially in recent years?

Siddharth Chatterjee: China was one of the architects of the United Nations and was the first signatory of the UN Charter in San Francisco in 1945.

Now, on the 50th anniversary of China in the UN, I am honored to serve as the UN Resident Coordinator, a post I took earlier this year.

While I am a recent arrival to China, only just beginning to understand its rich tapestry of over 5,000 years of civilization, the UN in China has had the privi-lege to shape and witness the profound economic and social transformations that have occurred since reform and opening-up.

This is a weighty question, as China and the world are at a critical juncture. Tentatively emerging from the COVID-19 pandemic, but with many countries still struggling terribly. Staring down the threats of climate change, with rec-ord-setting heat, fires, storms, and other disasters. Counting down the years in this “Decade of Action” to achieve the Sustainable Development Goals.

Today, China is the second-largest contributor to the UN peacekeeping budg-et and has sent more peacekeepers to UN missions than any other perma-nent member of the Security Council. China also played a vital role in shaping the consensus needed for the SDGs and the Paris Agreement.

It is now time for the UN and China to reimagine, innovate, reinvigorate, and continue in our cooperation, dedicating ourselves anew to creating lasting prosperity for the people of China and all the world.

Beijing Daily: Are you a fan of winter sports? Or what sports do you like (not necessarily winter sports)? Do you feel Chinese people love sports?

Siddharth Chatterjee: I regret to say that I have no skills in any winter sports. I grew up in a place, where we had two seasons. Hot and very hot.

However. I am an avid practitioner of yoga and running in all seasons. As a frequent runner, I also must attest to the improvements in air quality now en-joyed by Beijing residents. 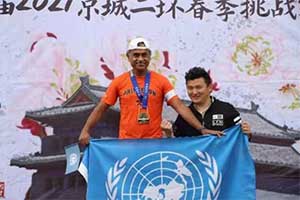 Siddharth Chatterjee (pictured left) displaying the flag of the UN following a team fun run in the streets of Beijing.

The prevention of noncommunicable disease and keeping one’s body and mind sharp are just two of the many reasons that motivate my interest in sport, also emphasized by the Healthy China 2030 initiative.

Traditional Chinese culture has long regarded physical fitness as an important characteristic, as seen in the long historical association with the martial arts. In the streets and public parks of China we see these elements to this day, along with more contemporary sports such as basketball.

I think back to a mere 13 years ago where the eyes of the world turned to Beijing for the Summer Olympics and Paralympics. What we all saw was not only a proud moment for the people of China, but China asserting itself as an enthusiastic sporting nation, leading the medal tally that year.

This year we saw athletes such as Su Bingtian – who set a new Asian record in the men’s 100-meter dash earlier this year at the Tokyo Olympics and he’s often referred to as the disrupter and game-changer for Chinese runners; Yang Qian, a third-year undergraduate young girl studying economics and management at Tsinghua University who also won the very first gold medal at the Tokyo Olympics – take this spirit forwards and I am confident that the ath-letes and people of China will put their love for sports on full display during next year’s games.

However, I must also add a word of caution. China is also seeing a surge of non-communicable diseases, like obesity, diabetes, and hypertension.

Almost 10% of all adults in China – about 110 million people – currently live with diabetes. Without urgent action to reduce lifestyle risk factors like un-healthy diet and lack of physical activity, that number is expected to increase to 150 million by 2040 – with major health, social and economic consequenc-es.

As the UN we will work closely with the Government of China to achieve its vision of a Healthy China by 2030. I will surely lead by example.