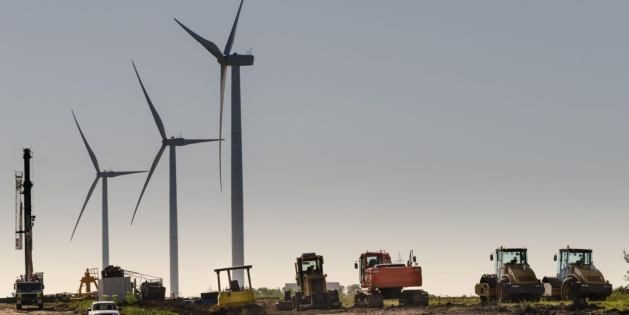 Construction of wind turbines near Tarariras, in Uruguay's Colonia department. Nearly all of the nation's electricity comes from renewable sources, but its government is exploring new financing instruments, such as a sovereign green bond, to help other sectors in the transition to net-zero. (Image: Picardo Photography / Alamy)

BUENOS AIRES, Dec 23 2021 (IPS) - Sustainable finance continues to expand in Latin America, as governments and companies take advantage of growing interest among investors in instruments that protect biodiversity and respond to the climate crisis. In 2020, more than US$16 billion of green, social and sustainable bonds were issued in the region.

Though their purpose may vary, these bonds share similar characteristics. A company or government takes on debt, and these funds must be used exclusively to meet a specific environmental or social goal, such as developing clean transport infrastructure, expanding renewable energy or meeting the Sustainable Development Goals.

As green bonds continue to grow, Uruguay will be the first country in Latin America to borrow at an interest rate tied to fulfilment of its climate commitments

However, with the growth of sustainable finance, new and even more innovative types of debt instruments have emerged, such as one now proposed by Uruguay. The government of president Luis Lacalle Pou is working on a bond whose funds will not be designated for a specific purpose, but will instead pay for different initiatives, and at a variable interest rate.

This rate will depend on whether Uruguay meets a previously established environmental target, such as its nationally determined contribution (NDC) to the Paris Agreement. In other words, if the country reduces its emissions as committed, it will be rewarded with a lower rate. And if it does not comply, it will be penalised with a higher rate.

So far, the only country to have developed such an instrument has been Luxembourg, which issued US$1.5 billion in debt in 2020. According to the Uruguay’s environment minister, Adrián Peña, the country’s own the bond will be for an amount between US$800 million and US$1 billion, with no exact date for its issuance yet set.

Developing countries like Uruguay are especially vulnerable to the climate and biodiversity crisis, and need financial support to meet their environmental or climate commitments. This is where sustainable finance comes in, as an instrument to support the transition of their economies.

Mechanisms for sustainable finance continue to grow more numerous and diverse. Argentina and Colombia, for example, have recently called for an expansion of debt-for-nature swaps, a tool already in use that would allow them to reduce their debts and also meet environmental targets. Elsewhere, finance experts have pushed for the creation of new instruments such as the bond now proposed by Uruguay.

“Debt swaps were very popular decades ago. But now the picture has changed a lot. It’s more complicated in terms of who holds the debt and how it’s traded,” said Jochen Krimphoff, WWF’s lead on green sovereign bonds. “In the long run, the more sustainably you manage your natural resources as a government, the more your economy can thrive sustainably.”

A green sovereign bond indicates a country’s commitment to sustainable growth strategies and low greenhouse gas emissions, which can stimulate private sector investment in green initiatives. It can also allow for more effective collaboration between different areas of government, as Peña pointed out.

“It seemed to us that we had a lot of knowledge to bring to the Ministry of Finance, which didn’t know so much about our issues. That’s where the idea of the bond came from,” the minister told Diálogo Chino.

In 2019, Chile became the first country in Latin America to issue a sovereign green bond, which has so far raised US$7.44 billion after successive issuances. The country has also issued social and sustainable bonds, as have Ecuador, Mexico and Guatemala, according to the Climate Bonds Initiative.

The energy and transport sectors have benefited the most from financing, as has the land use sector. In the case of Chile, funds from its green bond went towards boosting clean transport, such as Santiago’s electric buses and the construction of new underground lines.

“There are many investors who want to invest in these instruments,” Pablo Cortinez, a sustainable finance consultant, said. “The fiduciary duty and profile of investors is changing, and more and more are calling themselves green. The largest economies in the region, such as Brazil and Argentina, should bet on green sovereign bonds.”

For Marcela Ponce, Latin American climate finance lead at the International Finance Corporation, 2020 was a landmark year for green sovereign issuance, and 2021 is not far behind. “Since COP26, finance ministries in Latin America have shown great appetite for the green bond market,” she added.

Unlike Chile, Uruguay will not issue a green bond, per se, as the funds can be used for any desired purpose. However, by linking the bond’s interest rate to the NDC, the government will create an additional incentive to direct finance towards initiatives that help it meet its climate change targets.

Uruguay submitted its NDC in 2017, in which it proposes per-gas carbon intensity reduction targets for three specific gases: carbon dioxide, nitrous oxide and methane, with reductions of 24%, 48% and 57% respectively by 2030, on an unconditional basis. A new NDC is expected to be submitted in 2022.

About 70% of Uruguay’s greenhouse gas emissions come from the agricultural sector, two thirds of which originate from beef production, according to the most recent emissions inventory. The government hopes that better pasture management will reduce emissions significantly.

“Uruguay is taking on a high political cost with the new sovereign bond. But if it succeeds, it would be a milestone for the region,” said Sebastián Ramos, a partner in the banking and finance department of Ferrere, a law firm in Montevideo. “The learning curve is high, as it is the first in the region with a sovereign bond of this type.”

Juán Giraldez and Stephanie Fontana of international law firm Cleary Gottlieb describe the debt instrument Uruguay wants to push as “the next frontier in sovereign financing”. However, they also highlight risks and challenges given its novelty, and as something so far only developed by Luxembourg.

For the bond to be successful, governments must be able to justify to their investors the choice of the specific target to which the interest rate is fixed, over other possibilities – the NDC, in Uruguay’s case. In addition, the target must be achievable during the life of the bond and a third party in charge of monitoring the actual achievement of the target must be defined.

“With the bond we are designing, Uruguay will have a fiduciary mandate to take care of the environment and reduce carbon dioxide emissions,” said Uruguay’s economy minister Azucena Arbeleche in an interview. “The incentives of the investor and issuer will be aligned for the fulfilment of a certain indicator.”

Further details on Uruguay’s sovereign green bond, including a date for first issuance, are likely to be confirmed in early 2022. Supporters of such instruments will be hoping that, if successful, it may be a catalyst for their growth and uptake in Latin America, which could provide a boost to sustainable transitions across the region.