WASHINGTON DC, Dec 10 2021 (IPS) - When one in five pre-school children is stunted due to chronic undernutrition, it is clear that global diets urgently need to improve and diversify to include more nutrient-rich fruits, vegetables and animal-source foods.

Yet with healthy diets out of reach for three billion people worldwide, resulting in insufficient vitamin and mineral intakes and bouts of illness, this shift cannot happen overnight. Instead, improving diets and nutrition must be seen as a holistic process.

Breeding staple foods, which are already accessible and affordable, with additional vitamins and micronutrients – known as “biofortification” – is a fundamental way to support better nutrition for all, but especially those who struggle to achieve a more diverse and nutritious diet.

Many factors contribute to inadequate diets around the world, from cost to climate change, all of which require a comprehensive and systemic transformation with innovation at every stage of the food chain, from incentives and new technologies for producers to education and improved livelihoods for consumers.

But to combat hunger, people simply need sufficient calories, and through biofortification, calories that are easiest to come by can also be source of key vitamins and minerals essential for good growth and strong immune systems.

In drought-stricken southern Madagascar, for example, which is experiencing the first climate-induced famine, a new effort is under way to deploy biofortified varieties of sweetpotato, which are enriched with vitamin A and fast maturing.

Since sweetpotato is a hardy crop that is already widely eaten, the biofortified version is a way to deliver crucial nutrition quickly in a form that Madagascans recognize and are likely to adopt. 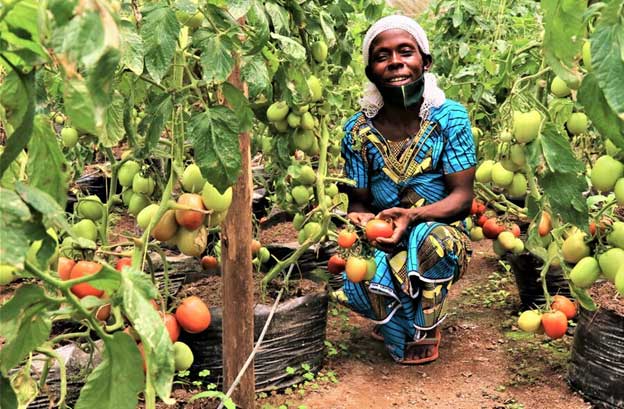 Meanwhile, the biofortification of rice is expected to provide up to 30 per cent of vitamin A requirements in the Philippines, where it has recently been approved for cultivation and where more than 15 per cent of children under six are vitamin A deficient because fresh fruit and vegetables are often unaffordable.

Biofortification also offers a way to preserve and enhance the nutritional value of the most consumed cereals, including rice, wheat, millet, and sorghum.

One under-reported consequence of rising levels of CO2 emissions is the degradation of nutritional quality of staple foods, with some studies indicating that future CO2 concentrations could reduce levels of protein, iron and zinc in cereals by up to 10 per cent.

Biofortifying grains with zinc can ensure good growth and support more than 200 enzyme systems, which is especially important given that nutrient declines in crops could result in an additional 175 million people being zinc deficient by mid to late century.

Zinc-enhanced wheat not only offers up to 40 per cent higher concentrations of zinc, but is also high yielding and disease resistant, meaning it not only safeguards the crop’s nutritional value against climate change, but it safeguards its productivity as well.

Finally, iron enriched crops such as beans, millets, and potato can help support the proper cognitive development of children as well as their physical development, allowing them the best possible chance to reach their full potential and a prosperous, healthy future.

Almost one-fifth of the population in Rwanda are now eating iron-enhanced beans, which provide 80 per cent of the iron needs of young children and non-pregnant women.

By getting nutrition right in the early years, millions of children will be able to escape the limitations of inadequate diets.

Good nutrition through a diet rich with fruits, vegetables and animal-source foods is the foundation of a healthy, productive society. Yet poor households in low-income countries spend up to 70 per cent of their income on food, and having calories to prevent hunger is their first priority.

Using biofortified staples is a no-brainer way to get major micronutrients into the diet at low cost, a vital pathway towards better long-term, sustainable nutrition and health.