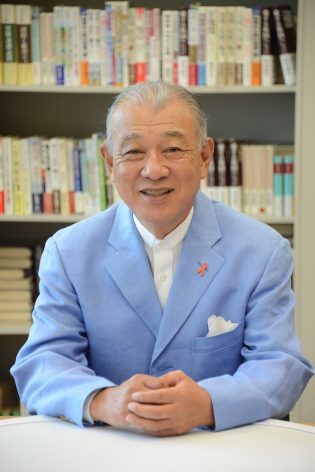 WHO Goodwill Ambassador for Leprosy Elimination, Yohei Sasakawa, would like to create a society where there is social inclusion. It is this philosophy that motivates his life-long campaign to end discrimination against people affected by leprosy. Credit: Sasakawa Leprosy Initiative

Johannesburg, Jan 30 2022 (IPS) - For the WHO Goodwill Ambassador for Leprosy Elimination, Yohei Sasakawa, ensuring affected peoples’ human rights is fundamental to the campaign to eradicate the disease.

In an exclusive interview with IPS on the eve of World Leprosy Day, he recalled his first encounter with people affected by leprosy, saying they were “without dreams or hopes and there was no light in their eyes.”

Sasakawa’s father, Ryoichi, hugged the patients in the newly opened hospital in Korea. He then realized that returning hope to people affected by leprosy could be his life’s work.

This work has continued for more than 40 years, but it is not over yet.

“People who should be part of society remain isolated in colonies facing hardships,” Sasakawa, who is also the chairman of the Nippon Foundation, says.

“Isn’t it strange that someone cured of a disease can’t take their place in society? I belatedly realized that if the human rights aspect wasn’t addressed, then elimination of leprosy in a true sense would not be possible,” explaining the rationale for approaching the United Nations in 2003.

As a result, a resolution on the elimination of discrimination against persons affected by leprosy and their family members was unanimously adopted by 192 countries voting in the UN General Assembly.

While Covid-19 has temporarily ended his travels, his work is far from complete. Once the pandemic is over, Sasakawa intends to continue his travels worldwide to bring onboard top officials and politicians – presidents and prime ministers – while spreading hope to affected people.

In the interim, the global ‘Don’t Forget Leprosy’ campaign by the Sasakawa Leprosy Initiative continues. The initiative strategically links the WHO Goodwill Ambassador for Leprosy Elimination, Sasakawa Health Foundation, and the Nippon Foundation towards achieving a leprosy-free world.

Sasakawa says his message is clear:  1) Leprosy is curable. 2) Medication is free. 3) Discrimination has no place.

“When people are still being discriminated against even after being cured, society has a disease. If we can cure society of this disease—discrimination—it would be truly epoch-making.”

Here are excerpts from the interview:

Yohei Sasakawa, Chairman of The Nippon Foundation, has served as WHO Goodwill Ambassador for Leprosy Elimination since 2001. He plays a leading role in the Sasakawa Leprosy (Hansen’s Disease) Initiative, which has organized the “Don’t Forget Leprosy” campaign.

Cecilia Russell: In your message to the world for World Leprosy Day, you expressed concern that the decrease in the number of cases detected was because the Covid-19 pandemic meant that less testing was done. How can leprosy-affected people get back on track?

Yohei Sasakawa: Many issues have been sidelined because of the Covid-19 pandemic, among them the challenges posed by leprosy, also known as Hansen’s disease. According to the Global Leprosy Update for 2020, there was a 37% year-on-year decrease in new cases due to disruptions to case-finding activities. There are concerns that hidden cases will lead to increased transmission and result in more cases with disabilities. On the other hand, while figures vary from country to country, the overall treatment completion rate remains at the same level as the previous year, indicating that stakeholders are working hard to maintain services, even in the midst of the global pandemic.

Even in normal times, health ministries have jurisdiction over all kinds of diseases. Compared to diseases such as TB, AIDS, or malaria, however, there are few cases of leprosy, so budgets and personnel are limited. Patients, meanwhile, might not visit a hospital because the long history of stigma attached to the disease makes it difficult, or because in its early stages, symptoms are painless. That’s why I feel it is necessary to meet with those at the top of the country and have them issue a call to eliminate leprosy. Once the COVID situation eases, I want to visit countries and encourage presidents and prime ministers to recognize the importance of this issue and seek their cooperation in helping activities against the disease to resume.

At the same time, I believe that the participation of people who have experienced the disease is also very important. There are so many things that people can do, such as active case-finding, mental support for people undergoing treatment, and awareness-raising. In 2011, the WHO issued guidelines on strengthening the participation of persons affected by leprosy in leprosy services in such areas as a way to improve the quality of leprosy services.

CR: You have chosen as a life’s work to raise awareness of both the disease and the impact of the stigma of leprosy. This is an age-old stigma and was considered a sign of impurity in Christian biblical times. How has an awareness of leprosy as a human rights issue changed perceptions about the disease? What more needs to be done?

YS: I started working on leprosy in the 1970s and have been the WHO Goodwill Ambassador for Leprosy Elimination since 2001. People who should be part of society remain isolated in colonies facing hardships. The more you look into it, the more you see the restrictions they live under, including legal restrictions in some cases. Isn’t it strange that someone cured of a disease can’t take their place in society? I belatedly realized that if the human rights aspect wasn’t addressed, then elimination of leprosy in a true sense would not be possible. That’s when I first approached the United Nations about this in 2003.

In 2007, the Japanese government appointed me as its Goodwill Ambassador for the Human Rights of Persons Affected by Leprosy. Collaboration with the Japanese government led in December 2010 to a UN General Assembly resolution on the elimination of discrimination against persons affected by leprosy and their family members to call on states to full consideration of Principles and Guidelines. The resolution was adopted unanimously by 192 countries.

Discrimination toward persons affected by leprosy and their families should never be tolerated. That’s why the Principles and Guidelines were approved.

When people are still being discriminated against even after they have been cured, then society has a disease. If we can cure society of this disease—discrimination—it would be truly epoch-making.

CR: Could you please tell our readers about your father and his role in influencing you to make this mission a life’s work?

YS: My father Ryoichi also served as a member of Parliament. He was a man who was especially compassionate toward the vulnerable and dedicated his life to them. Concerning leprosy, in particular, there was an incident where a young lady living in the neighborhood suddenly disappeared, and he later found out she had been segregated due to leprosy. He had a very strong sense of justice and took exception to the fact that something so unreasonable was permitted on the basis of a disease.

In 1962, my father established the Japan Shipbuilding Industry Foundation, the forerunner of The Nippon Foundation, and began social contribution activities. In 1967, he started work in earnest on realizing his long-held dream of eradicating leprosy with the construction of some new facilities for a leprosy center in Agra, India. With the establishment of the Sasakawa Memorial Health Foundation (now Sasakawa Health Foundation) in 1974, efforts to tackle the disease stepped up.

My father built leprosy hospitals, mainly in Southeast Asia. I was young and often accompanied him, but I didn’t go inside the hospitals. In the mid-1970s, he responded to a request to build a leprosy hospital in Korea. I went with him to the opening ceremony and entered a leprosy hospital for the first time. Everyone sat on the bed facing us, but they were completely expressionless. Their faces were ashen-colored; they were without dreams or hopes, and there was no light in their eyes.

I was really surprised to see my father go to every bed, hug each person, and encourage them in a very natural way, unconcerned by the pus oozing from their bandages. Discovering a world that I had not encountered before and seeing how naturally my father behaved, I wondered if this would be my life’s work. Since then, I have been active in leprosy.

CR: In some countries, people affected by leprosy are still confined to leprosy colonies. How do you see your role as WHO Goodwill ambassador and the Don’t Forget Leprosy campaign changing these perceptions around a treatable disease? What is needed to change the perception about leprosy and remove the stigma?

YS: Thinking strategically about how to make people aware of the importance of this problem and how to solve it is very important. You have to convince heads of state in each country. If a budget is allocated as a result of meeting with and explaining the situation to the head of state, if the president orders it—then the person in charge at the ministry of health or the leprosy program manager will be greatly encouraged in their work.

On the other hand, it is also very important to reach the many people without knowledge of leprosy and allay their fears explain that it’s not hereditary, it’s not divine punishment, it’s not highly contagious. Wherever I go, I always stress: 1) Leprosy is curable; 2) Medication is free; 3) Discrimination has no place. For that, the help of the media is necessary, so one of my very important tasks is to have a proper media strategy.

Also, as we now live in an era where every individual can publicize leprosy issues via social media, I think it is important that everyone concerned with these issues actively raises them, not as issues affecting someone else, but as personal issues.

CR: You have been involved in numerous other humanitarian endeavors, apart from your 40-year-old association with leprosy and your role as WHO Goodwill Ambassador for Leprosy Elimination. These include the Change for Blue campaign, and you acted as a special envoy of the Japanese government to try to bring peace to Myanmar. Do you have a philosophy about humanitarian work that guides you?

YS: One of my philosophies in life is the ‘on-site principle’: problems and their solutions are found in the field. Another is that social actions require that you keep your enthusiasm bubbling over, regardless of your age, and have the mental fortitude to withstand any difficulties. In addition, you have to keep going until you achieve results. I’ve acted on the basis of these three ideas.

CR: Is there anything else you would like to add?

YS: There are more than 1 billion people in the world living with disabilities, including persons affected by leprosy. We need to create an inclusive society where everyone can have an education, find work and get married if they want to. People have the passion and the motivation; often, all they lack is opportunity.

I would like to create a society where everyone feels fully engaged, able to express their opinions, and appreciated. The coming era must be one of diversity, and for that, we need social inclusion. There is such ability and potential in the world, and to have everyone participate in society will create a truly wonderful future.

That’s why it’s important for persons affected by leprosy to have confidence and speak out. To support them, Sasakawa Health Foundation and The Nippon Foundation are helping them to build up their organizational capacity. I’d like to see a society in which everyone is active, able to express their opinions to the authorities with confidence, and their contribution is valued.