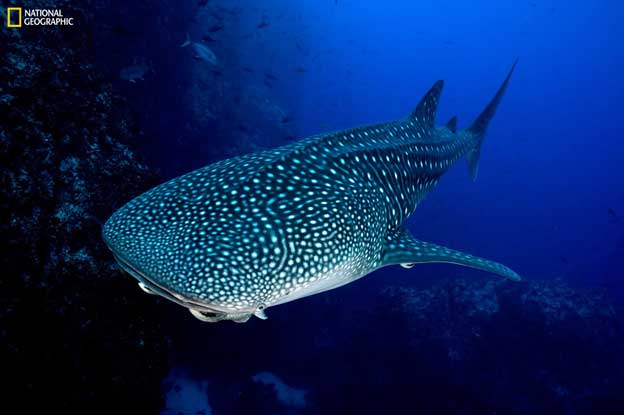 Whale sharks, the largest of living sharks, filter-feed on plankton and other small marine creatures, which they suck into their open mouths as they swim. Credit: Enric Sala, National Geographic Pristine Seas

WASHINGTON DC, Jan 10 2022 (IPS) - There is no other place in the world like Costa Rica’s Cocos Island National Park. The waters surrounding the island–covered with tropical forests–are a playground to countless shivers, or schools, of sharks, including hammerhead sharks, whitetip reef sharks and whale sharks.

Also boasting rays, turtles, whales and dolphins, It’s one of the world’s most biodiverse waterways. In recent years, however, industrial fishing activity has encroached on the area, threatening this unparalleled marine life.

Fortunately, Costa Rica took decisive action this month by expanding the protected waters by 27 times. They also protected an additional marine area–the Bicentennial Marine Managed Area, which is twice the size of the expanded Cocos Island National Park. The area includes no take zones and will closely monitor fishing activity.

Stories like this one are all too rare. In the last century alone, we have removed over 90% of the ocean’s large fish, yet less than 8% of the ocean is under some kind of protection. We’re still learning about the collateral damage from destructive fishing activities, like bottom trawling, which scrape up the ocean floor—the world’s largest carbon storehouse.

It’s clear that commercial fishing, global warming and pollution have decimated the ocean. Few corners of the vast ocean are safe. As a result, the seas are losing their ability to safeguard biodiversity, provide food and store carbon—all of which are critical to maintaining a livable planet, which was under intense discussion at the climate talks in Glasgow late last year.

But it is possible to restore the ocean’s benefits to people and the planet. All we must do is rewild the sea. The only catch is that we can’t wait. We have less than a decade to act.

Since 2018, I have worked around the clock and around the world with a team of scientists to identify which areas of the ocean we must protect first. We have discovered through our research and countless expeditions the trade-offs among the ocean’s benefits.

To support our work, we developed a framework that could help us maximize the benefits that humanity obtains from the ocean. We found that if we were to give equal importance to biodiversity, food and carbon, it is imperative to protect 45% of the ocean – the “right” 45%.

Even if we decided that biodiversity is not so important, we would need to protect 30%–the minimum area needed to preserve marine life and all of the benefits it provides to people.

Costa Rica is part of a growing group of world leaders that understand the benefits of protecting marine areas. At the Glasgow climate talks, Costa Rica, together with Colombia, Ecuador, and Panama, announced their commitment to create more marine reserves in the Eastern Tropical Pacific.

Establishing no-take areas along an “ocean highway” for migratory species such as tuna will actually increase fish supplies in the surrounding areas. As a result, biodiversity and economies benefit.

Earlier this month, the government of Portugal expanded a marine protected area around the Selvagens Islands, located midway between Madeira and Canary Islands. At 3,677 square kilometers, the area is now the largest fully protected marine reserve in Europe.

Countries worldwide must establish more of these protected areas by 2030 if we are to ensure that the ocean can continue to provide us with its benefits. Protections must be strong. Marine protected areas can only work their magic if all fishing and other damaging human activities are banned—and these rules are enforced.

So far, 77 countries have agreed to champion a global goal to protect 30% of the ocean—and well as land—by 2030. They are pushing to ensure that the 30×30 target is enshrined in a global UN biodiversity agreement, under negotiation now and expected to be signed in 2022.

But the world doesn’t have to wait for the ink to dry on the agreement to establish more marine protected areas. Too much is at stake. I have seen with my own eyes how nature recovers in marine reserves. More importantly, I have seen how this return of nature has helped people gain better lives.

Enric Sala is an Explorer in Residence at the National Geographic Society, the founder of Pristine Seas, and the recipient of this year’s Prince Albert I Grand Medal for his work to protect the ocean. Pristine Seas has helped to establish 24 marine protected areas, covering a total area of more than 6.5 million square kilometers — more than twice the size of India.