When the Fate of Half Our Planet is being Discussed, it’s too Important to Shut out Civil Society

By Will McCallum Reprint | | 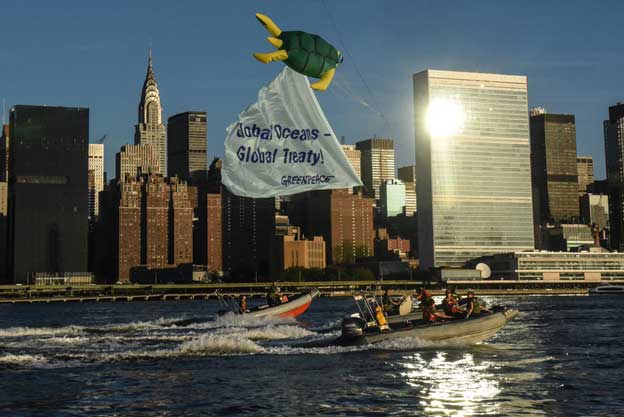 Greenpeace activists fly a giant turtle kite outside the United Nations headquarters in New York as countries gathered to begin negotiations towards a treaty covering all oceans outside of national borders. September 2018 Credit: Greenpeace

LONDON, Feb 16 2022 (IPS) - Over the past two weeks, a petition signed by almost five million people globally was handed in to governments around the world. It called for a Global Ocean Treaty to help rescue our oceans.

Yet with governments gathering next month to discuss the fate of half our planet, civil society is being shut out. The climate crisis and industrial fishing are pushing our oceans to the brink. Wildlife populations are collapsing, our oceans are heating and their very chemistry is changing.

World leaders will meet at the so-called BBNJ negotiations from 7-18 March to attempt to reckon with the scale of the crisis facing one of our planet’s key life support systems. But, as NGOs found out in a closed-door briefing call yesterday, the meeting will not allow for proper participation from civil society.

It is worth noting that without years of campaigning by organisations like Greenpeace and many others, this treaty process would not even be happening: civil society has played a crucial role in getting us to this stage.

It contributes expertise and information, facilitates policy development and provides a network of connections and experts, as well as a platform for frontline communities facing these issues day in, day out.

The extremely limited participation at this meeting simply does not represent the urgency with which we need a rescue plan for our oceans: a Global Ocean Treaty that allows us to cover at least a third of international waters with ocean sanctuaries – areas free from harmful human activity like destructive fishing.

As COVID-19 continues to impact on all of our lives, we all recognise and appreciate the seriousness of health measures around large international conferences. But there has to be a way to also ensure that the vital voices which civil society represents are heard in a safe and meaningful way, particularly during a time when not only our global health, but our planetary health, is in jeopardy.

Closing the doors to civil society – and even restricting government participation so severely – should be unthinkable and sets a worrying precedent for democratic engagement at the UN. What possible justification can there be to deny civil society the right to speak on video screens?

It hampers the important role that civil society has played, and continues to play, in the Global Ocean Treaty negotiations, as well as other UN processes. Two years into the COVID-19 pandemic, innovative hybrid models and flexible health measures have shown that effective and safe participation is possible, and a failure to embrace this approach at the UN – especially as we face critical decisions that affect us all – is simply untenable.

Almost 5 million people globally are demanding urgent action to tackle the ocean crisis. Over 100 governments claim to back ocean protection. Organisations amplifying the voices of millions of people worldwide must be represented as decisions are made.

These negotiations are simply too important to avoid proper scrutiny: the UN should review its decision and work to ensure that civil society can participate in Global Ocean Treaty negotiations in a safe and meaningful way.

This means allowing in-person representation from NGOs during the deliberations, timely access to information prior to and during the meeting, and the opportunity to provide interventions and written submissions.

This isn’t simply a matter of transparency and accountability: ocean protection is a scientific imperative and governments are not acting fast enough. We know that for the three billion people who depend on the oceans for their food and livelihood, for the wildlife that call the ocean home and for the fight against climate breakdown, we need a network of ocean sanctuaries across at least a third of the world’s oceans by 2030.

To do that we first need to win an ambitious Global Ocean Treaty at the UN that gives us the tools we need to meet that target in the vast majority of the oceans beyond national boundaries.

The pandemic has pressed the pause button on so many things, but not for our natural world. From the melting Arctic to the plundered Pacific, the climate and nature crises are accelerating. Political momentum for a network of ocean sanctuaries across our oceans is gathering pace, but governments need to act like our lives depend on it, because they do.

Out on the water, while we delay, destructive fishing companies are operating out of sight and beyond the rule of law, stripping the oceans of life. This plunder of the seas is pushing wildlife populations towards collapse and leaving nothing for the coastal communities who rely on artisanal fishing to survive.

Pollution, oil drilling and the emerging threat of deep-sea mining, are poisoning marine life and making the climate crisis worse by killing off vital ecosystems.

Our oceans connect us all and what happens there will impact the future of life on Earth. Ocean sanctuaries can give wildlife space to recover and, in turn, help to cycle carbon and avoid the worst effects of the climate crisis. We need to protect at least 30% of the oceans by 2030, not the paltry 1% of the global ocean that is currently protected.

We desperately need progress at this meeting: governments were expected to conclude the treaty at these negotiations, and so it is vital that every effort is made to ensure the maximum participation possible, so that essential negotiations can take place.

To do that, we need civil society organisations in the room.