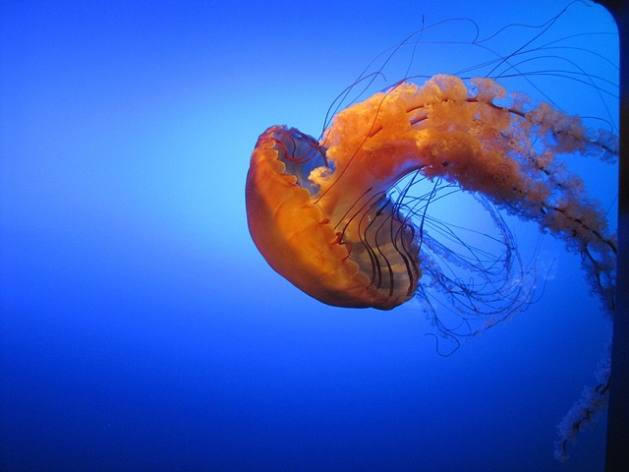 Edible varieties of jellyfish have been consumed for generations in some parts of Asia. They are low in carbohydrates and high in protein content. Image by hagapp from Pixabay.

ROME, Mar 14 2022 (IPS) - Between the devastating effects of climate change and the fast advancing new technologies, it seems now evident that the future of food will change. Whether it’s new foods like jellyfish, edible insects and cell-based meat, or new technologies like blockchain, artificial intelligence and nanotechnology, the future promises exciting opportunities for feeding the world, says a new report.

“However, the time to start preparing for any potential safety concerns is now.”

A report out on 7 March 2022 by the Food and Agriculture Organization of the United Nations (FAO) looks at how major global drivers like economic growth, changing consumer behaviour and consumption patterns, a growing global population and the climate crisis will shape food safety in tomorrow’s world.

“We are in an era where technological and scientific innovations are revolutionising the agrifood sector, including the food safety arena. It is important for countries to keep pace with these advances, particularly in a critical area like food safety, and for FAO to provide proactive advice on the application of science and innovation,” said FAO Chief Scientist Ismahane Elouafi.

The Thinking about the future of food safety – A foresight report — maps out some of the most important emerging issues in food and agriculture with a focus on food safety implications, which are increasingly on the minds of consumers around the world.

It adopts a foresight approach based on the idea that the roots of how the future may play out are already present today in the form of early signs. Monitoring these signs through the systematic gathering of intelligence increases the likelihood that policy makers will be better prepared to tackle emerging opportunities and challenges.

The report covers eight broad categories of drivers and trends: climate change, new food sources and production systems, the growing number of farms and vegetable gardens in our cities, changing consumer behaviour, the circular economy, microbiome science (which studies the bacteria, viruses and fungi inside our guts and around us), technological and scientific innovation, and food fraud.

Here are some of the report’s most interesting findings:

Recent evidence points to a severe impact of climate change on various biological and chemical contaminants in food by altering their virulence, occurrence and distribution.

Traditionally cooler zones are becoming warmer and more conducive to agriculture, opening up new habitats for agricultural pests and toxic fungal species. For instance, aflatoxins, which were traditionally considered a problem mainly in some parts of Africa, are now established in the Mediterranean.

Seaweed consumption is also spreading beyond Asia and is expected to continue growing, in part because of its nutritional value and sustainability (seaweeds do not need fertilisers to grow and help combat ocean acidification).

One potential source of concern is their ability to accumulate high levels of heavy metals like arsenic, lead, cadmium and mercury. Interest in edible insects is also rising in response to growing awareness of the environmental impacts of food production.

While they can be a good source of protein, fibre, fatty acids, and micronutrients like iron, zinc, manganese and magnesium, they can harbour foodborne contaminants and can provoke allergic reactions in some people.

“Production of this ‘mini-livestock’ brings with it several potential benefits and challenges.”

As plant-based diets expand, more awareness about introducing food safety concerns, such as allergens from foods not commonly consumed before, is needed.

“Examples of potential concerns include the use of animal-based serum in the culture media, which may introduce both microbiological and chemical contamination.”

As with all emerging technologies, there are opportunities and challenges, adds the new FAO report.

Coinciding with the launch of the report, FAO and the World Health Organisation (WHO) announced that this year’s edition of World Food Safety Day, to be held on 7 June, will focus on the theme of “Safer food, better health.”

The World Day will focus, among other aspects, on the fact that food safety saves lives. It is not only a crucial component to food security, but it also plays a vital role in reducing foodborne disease.

“Every year, 600 million people fall sick as a result of around 200 different types of foodborne illness. The burden of such illness falls most heavily on the poor and on the young. In addition, foodborne illness is responsible for 420 000 preventable deaths every year.”