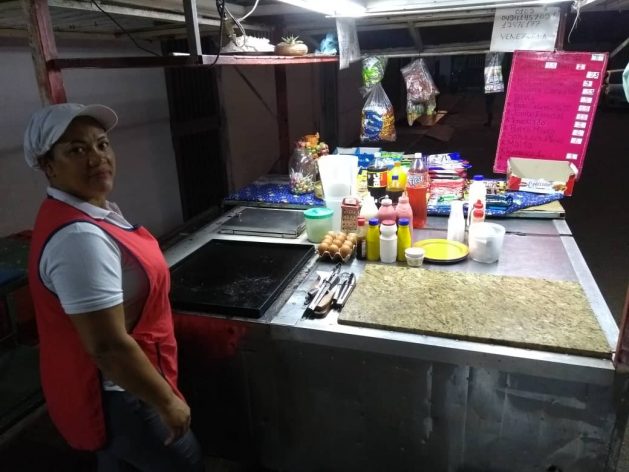 Doris Martínez gets ready to start cooking at her food kiosk in Valles del Tuy, an area of small dormitory towns near Caracas. CREDIT: Humberto Márquez/IPS

CARACAS, Mar 18 2022 (IPS) - Doris Martínez was a cook in a Venezuelan restaurant that closed its doors; she emigrated to Colombia, got sick from working long hours standing in front of a stove, and returned to her country where, together with her husband and children, she runs a busy fast food kiosk on a road in Valles del Tuy, near the Venezuelan capital.

Johnny Paredes of Peru was a security guard and employee of a restaurant in Lima until he decided to become a self-employed street vendor selling fancy clothes in the mornings and food and beverages in the afternoons in the upscale neighborhood of Miraflores.

Mexican computer technician Jorge de la Teja works much longer hours in Mexico City than at his former job in a service company, but with forced telework increasing due to the COVID-19 pandemic, his clients and income have grown over the past two years.

In Latin America and the Caribbean, 140 million workers (51 percent of all employed people) work in the informal sector and have been strongly impacted by the pandemic. But, often working on the streets, they take the pulse of the crisis and take on new tasks or ventures to support their families.

Since the pandemic broke out in March 2020, 49.6 million jobs, both formal and informal, have been lost in the region, 23.6 million of which were held by women, according to data from the International Labor Organization’s (ILO) latest labor overview, published in February.

Informality “continues to be one of the most important characteristics of the region’s labor markets,” Roxana Maurizio, an Argentine labor economics specialist with the ILO, told IPS from the agency’s regional headquarters in Lima.

Studies by the Economic Commission for Latin America and the Caribbean (ECLAC) have shown that of the 51 percent of informal workers, up to 37 percent work in the informal sector of the economy, more than 10 percent in the formal sector and four percent in households.

In practice, one out of every two employed persons in the region is in informal employment, according to the ILO, and one third is self-employed, according to ECLAC.

The ILO considers informal employment to be all paid work (both self-employment and salaried employment) that is not registered, regulated or protected by legal or regulatory frameworks. For the workers who perform it, it adds, remuneration depends directly on the benefits derived from the goods or services produced. 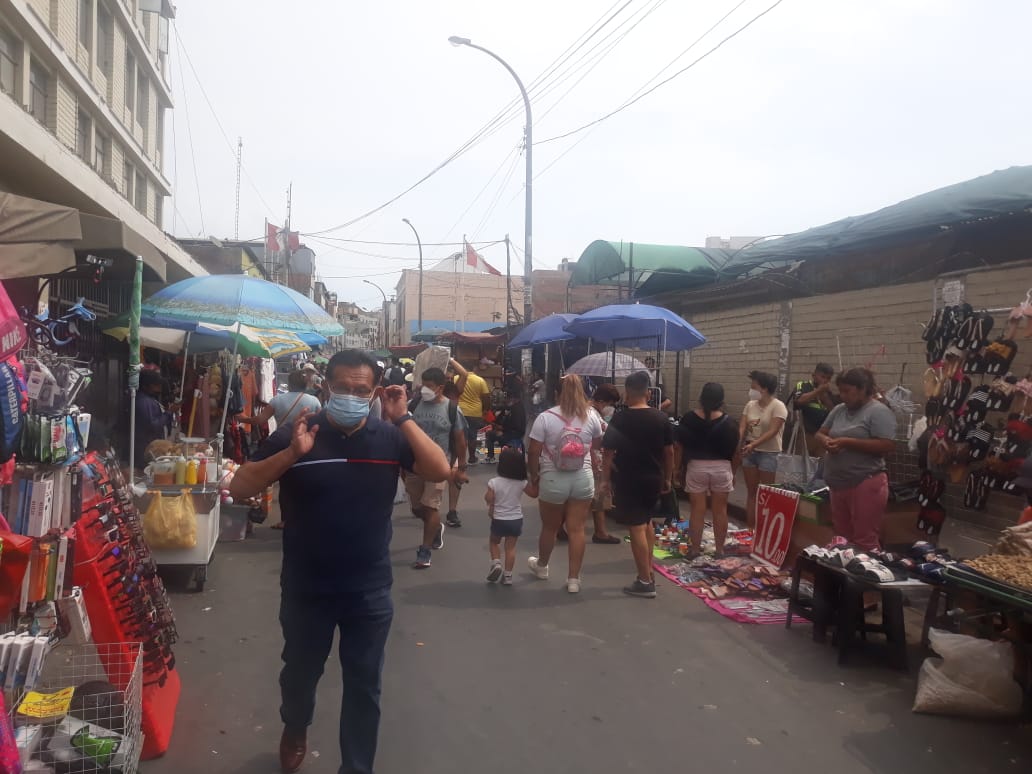 Street vending is one of the expressions of labor informality that dominates many streets in the region’s large cities, as in this open-air market in Lima. CREDIT: Courtesy of Johnny Paredes

Faces behind the numbers

Paredes, 46, told IPS from Lima that “in my case it worked out better, because of the independence of having my own schedule and being able to shorten or lengthen it depending on how the workday turns out, and because on the street I earn between 25 and 35 dollars a day, double what I was paid in my previous jobs.”

De la Teja, 37, agrees and explains that in Mexico City he supports his family “comfortably, with regard to food and other day-to-day expenses, because I earn more than 2,000 dollars a month. But extra expenses, such as insurance, or traveling for vacation, are difficult.”

Martinez, a 50-year-old mother of two sons and three daughters and grandmother of three, works as a domestic and caregiver in the mornings and in the afternoons she helps run the family kiosk, the “Doris Burger”, with her husband and two sons.

At the kiosk she earns “about 30 or 35 dollars a day from Monday to Friday, and up to 50 on weekends. Much more than in the jobs I have had standing in front of a stove since I was young, and it’s also better because it brings in money for several members of the family.”

The situation is different for Wilmer Rosales, a 39-year-old “todero” or jack of all trades in Barquisimeto, a city 350 kilometers west of Caracas, who said that “here in the interior (of the country) there is almost nothing to do and when there is, the pay is very low – two, three, or five dollars for a day’s work, at the most.” 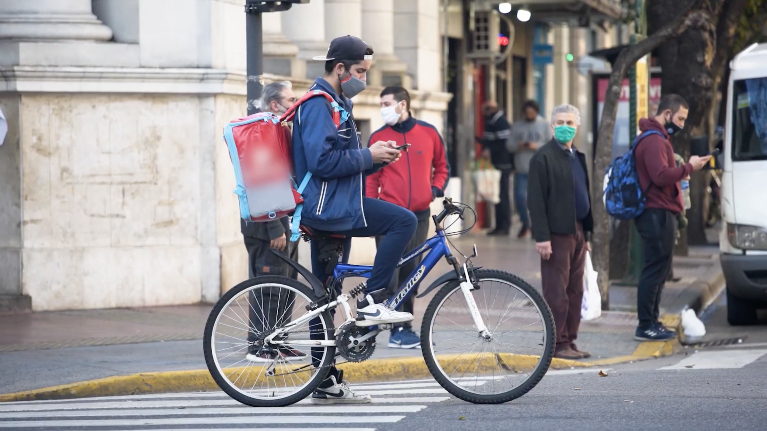 Home delivery of food and other products has become a source of informal sector work in Latin American cities, in a sector driven by the COVID pandemic. CREDIT: ILO

In its February report, the ILO showed that the region’s 6.2 percent economic growth in 2021 was insufficient for the labor market to recover, and the regional unemployment rate stood at 9.6 percent.

Of the 49 million jobs that were lost at the peak of the crisis, in the second quarter of 2020, 4.5 million have yet to be recovered, the vast majority of them jobs previously held by women. And in total there are some 28 million people looking for work.

After the onset of the pandemic, the crisis manifested atypically and instead of affecting more formal occupations, there was a greater loss of informal jobs, leaving millions of people without an income.

In Argentina, Mexico and Paraguay, for example, the reduction in informal sector jobs accounted for more than 75 percent of the fall in total employment during the first half of 2020. In Costa Rica and Peru the proportion was somewhat lower, 70 percent, while in Brazil and Chile it was around 50 percent.

The situation has now been reversed, and the countries with available data indicate that between 60 and 80 percent of the jobs recovered up to the third quarter of 2021 were in the informal sector.

Among the factors favoring recovery of the informal sector are the destruction of formal sector jobs due to the pandemic, the greater ease of interrupting an informal salaried relationship, its greater incidence in small businesses and enterprises, as in the case of Martinez, and the impossibility of many informal workers to do telework.

Women are lagging behind in this recovery, due to their greater presence in sectors strongly affected by the crisis that are rallying slowly, such as hotels and restaurants. In highly feminized sectors, such as domestic service work, the rate of informality exceeds 80 percent.

Nor is informality benign to young people, who face greater labor market intermittency, explained in part by the intense inflows and outflows of the labor force; and greater labor instability is associated with their prevalence in informal, precarious, low-skilled activities. 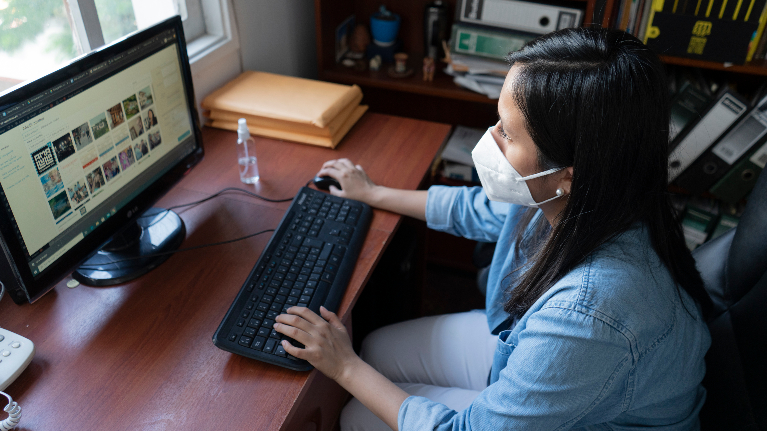 Telework is an informal work option that has thrived during the COVID-19 pandemic in Latin America and is a refuge for women, who were especially hard-hit by the abrupt drop in employment during the confinement and shutdown of non-essential activities at the beginning of the health crisis. CREDIT: ILO

Leave no one behind, especially women

Against this backdrop, informality represents a challenge to the need and proposals in the region to produce, at the pace of the pandemic and as a way to overcome it, a sustainable and inclusive recovery, “leaving no one behind”, as the mantra already embedded in the discourse of various international organizations goes.

Maurizio is clearly committed to the formalization of employment. “Today, more than ever, the recovery needs to be people-centered; in particular, the creation of more and better jobs, formal jobs,” she said.

Informality “continues to be one of the most important characteristics of the region’s labor markets. Economic and social recovery will not be possible unless significant progress is made in reducing its incidence,” said the ILO specialist.

A necessary condition is “to advance in a process of economic growth with stability, reconstruction of the productive apparatus and persistent improvements in productivity.”

There must be, according to the expert, “a particular focus on the digital transition and young people; strengthening of labor institutions such as, for example, the minimum wage; care policies that allow women to return to and remain in the labor market; and support for small and medium-sized enterprises.”

Maurizio also called for the extension of unemployment insurance, social protection policies and “income guarantees for the population that continues to be strongly affected by the crisis.”

The gender perspective takes on “a central relevance in the recovery, taking into account the fact that of the 4.5 million jobs still to be recovered, 4.2 million are in traditionally female occupations.”

Among other measures, it is necessary to “facilitate the return of women to the labor market through a policy of investment in comprehensive care services with greater coverage, which at the same time should be a source of formal employment. Also, to support the recovery of economic sectors with a high female presence.”

Precarious working conditions have been a characteristic of informality associated with poverty in Latin America. CREDIT: Marcello Casal/Agência Brasil

Unions for a new working class

In the world of the trade unions, Brazilian Rafael Freire, secretary general of the Trade Union Confederation of the Americas (TUCA), added the challenge of “having a trade union for today’s working class, which in large part is precarious, outsourced, or working from applications.”

This workforce, “without job contracts, is increasingly part of the informal sector, in large proportions, for example 70 percent in Honduras and 80 percent in Guatemala,” said the leader of the 55 million-member central trade union from its headquarters in Montevideo.

Informality, which is structural in the Latin American social and labor panorama, is a major hurdle for economic recovery and social justice in the region, and while governments design strategies, define policies and take measures, millions of informal workers rely on their resilience to bring home food for their families.