Mary Robinson is Chair of The Elders 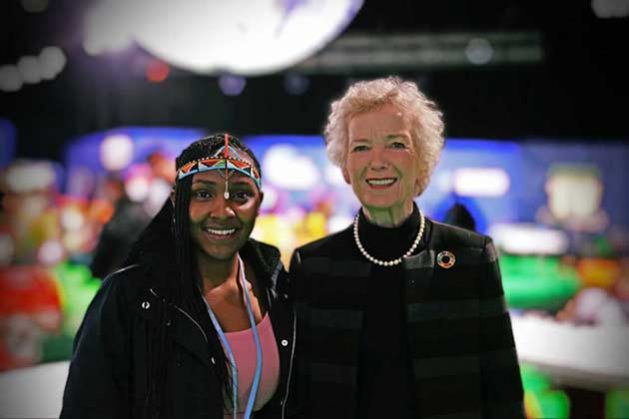 Mary Robinson with Elizabeth Wathuti at COP26 in Glasgow. Credit: The Elders

DUBLIN, Mar 7 2022 (IPS) - Women are already leaders on the frontlines of the climate crisis. Sisters Nina and Helena Gualinga of the Kichwa Sarayaku community in Ecuador work tirelessly to protect Indigenous land. Archana Soreng from the indigenous Khadia tribe in Odisha, India is a talented climate researcher and advisor to the United Nations Secretary General. Ugandan activist Vanessa Nakate is encouraging a whole generation of young people to fight for their right to a safe future. There are thousands of other women and girls working tirelessly to protect our planet whose names I do not know but who deserve to be acknowledged this International Women’s Day too.

Many women and girls working in the fight against climate change have stepped into leadership not out of choice but out of necessity – the brunt of the climate emergency, which amplifies existent inequalities, is often felt hardest by women and girls.

Women’s vulnerability to climate change is social, economic, and cultural. Women in climate vulnerable nations tend to be highly dependent on local natural resources for their livelihoods, particularly in rural areas where they shoulder the responsibility for household supplies. However, women must not be seen as passive victims of climate change but as active and effective agents of change.

Women have long been the custodians of the environment in many traditional societies. It is women who are often the providers of food, the stewards of seed banks, and the decision-makers at household level. It is often women who are the early adopters of new techniques and who are frequently the first responders in disaster situations. Our world is also full of remarkable women leading the way as climate scientists, litigators, community organisers, business owners, policy-makers, inventors and more.

While it is important for us to celebrate the vital contributions of women and girls around the world in tackling the climate emergency, we must in turn recognise the gender inequality at the heart of this crisis. The gendered dimensions of climate change and its responses are still insufficiently addressed in either emerging climate finance architecture or in most countries’ strategies for climate mitigation and adaptation.

As exposed in last month’s IPCC report, the threat of climate change reaches across sectors, regions and populations. Tackling it will require all of humanity’s ideas, efforts, and innovations. Ensuring that diverse populations are represented in key decision-making processes is essential if we are to succeed in this colossal task.

We must start to see scaled-up funding for women’s capacity building as well as strengthened efforts to support women and girls to lead on addressing climate change at community, national, and international level.

According to Oxfam, the latest figures show that only 1.5 percent of overseas climate-related development funds named gender equality as their primary objective. Of this, only 0.2 percent was reaching organisations led by women or for women. Things are slowly improving, but there is still a long way to go.

The Elders – the group of independent global leaders working together for peace and human rights that I chair – are calling for more investment for climate vulnerable nations so that millions more women and girls can build resilience to climate and disaster risks. A crucial element of that must be increased financial support for adaptation as well as mitigation.

At COP26 international leaders signed a statement calling for the role of women to be advanced in addressing climate change. This statement remains open for signatures from nation states until the 66th meeting of the Commission on the Status of Women, to be held later this month: an event that will have a focus on women’s empowerment in the context of climate change, the environment and disaster risk reduction.

Pledges made on gender-just climate action, like the ones made at COP26 and earlier in 2021 at the Generation Equality Forum, are important; but we now need to see those promises transformed into action. Equitable and inclusive decision-making means not only ensuring that women and girls are always at decision-making tables but also that women and girls from particularly marginalised groups such as indigenous and rural communities are there too.

At COP26, there was a lack of female representation across the board when it came to climate discussions – it was too male, pale and stale. COP27 must not look like that.

This International Women’s Day should be the last one where we are left discussing a lack of representation in climate decision making. When women and girls are excluded from informing climate negotiations and implementation processes, it undermines efforts to protect our collective future.

A young climate activist I greatly admire, Elizabeth Wathuti from Kenya, recently said: “I believe in our human capacity to care deeply and act collectively.” Like Elizabeth, I believe in humanity enough to still have hope that we can do what is needed to address the climate crisis – but it will take all of us.