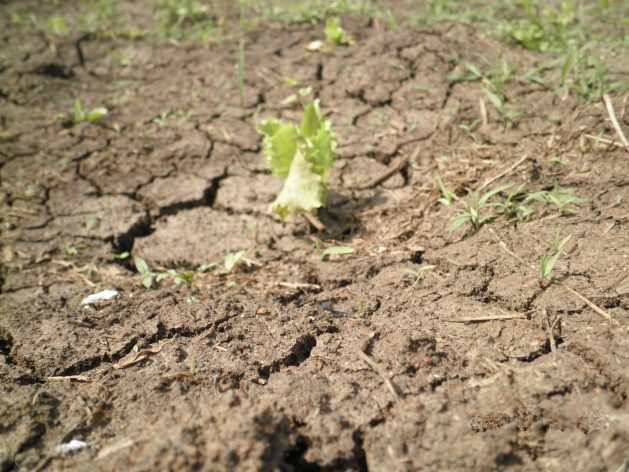 Climate change is reversing some of Africa's gains in achieving Sustainable Development Goals in food security and poverty alleviation and the continent needed to build resilience against future shocks. Credit: Busani Bafana/ IPS

African economies took a hit during the pandemic, which governments say has led to reverse progress made in health care, education, poverty alleviation, food security, and industrialisation as part of delivering on the SDGs adopted by the UN in September 2015.

The 8th Session of the African Regional Forum on Sustainable Development (ARFSD) – an annual multi-stakeholder platform system to review and catalyse actions to achieve the SDGs and the 2030 Agenda for Sustainable Development, heard how Africa is on the cusp of opportunity in building better through green investment.

But the opportunity will only be unlocked when African countries cooperate more and deepen political and economic relations.

A springboard and not a setback
“Building the Africa we want is up to us,” said Rwanda President Paul Kagame, who opened the Forum convened in the capital, Kigali. He urged Africa to prioritise domestic resource mobilisation to finance its development, particularly its national health care systems.

“Over the years, Africa had made significant progress in tackling economic challenges. However, COVID 19 has slowed the development gains in some cases reversed progress,” Kagame noted. He called for solid mechanisms to monitor and change the implementation of the SDGs. “We have to own and lead the process and support one another. That’s why these agendas [2030 Agenda and Agenda 2063] are important because it is about achieving the stability and sustainability of our continent.”

Organised jointly by the UN Economic Commission for Africa (UNECA) and host governments in collaboration with the African Union Commission, the African Development Bank and other entities of the UN, the ARFSD was this year convened under the theme, ‘Building forward better: a green, inclusive and resilient Africa poised to achieve the 2030 Agenda and Agenda 2063’. The two agendas provide a collaborative structure for achieving inclusive and people-centred sustainable development in Africa.

“We have to look at the silver lining of this [COVID-19]. We can build an Africa that is greener and more resilient in line with the Agenda 2063 … instead of being a setback, the pandemic response can be a springboard to recover human development,” said Kagame remarking that Africa needs bilateral partnerships to strengthen vaccine manufacturing and pharmaceuticals, mobilise domestic financing and adopt suitable technologies and infrastructure.

“The fate of the SDGs will be decided in Africa,” UN Deputy Secretary-General Amina Mohammed noted. She explained that the pandemic had increased debt distress in some African countries and called for the channelling of Special Drawing Rights allocated by the International Monetary Fund to help countries in need.

“There are big returns to be had in Africa,” said Mohammed admitting that the African continent has faced development and economic challenges which need addressing for Africa to succeed.

Mohamed said in achieving the 2030 Agenda and Agenda 2063, Africa must prioritise ending the pandemic and building resilience to future shocks, scaling up climate resilience, with developed countries honouring their pledges and making a fast transition in energy and food systems. She said recovering education losses and supporting gender equality actions were key to winning the development battle.

Africa is winning
Under-Secretary-General of the United Nations and Executive Secretary of ECA, Vera Songwe, highlighted that Africa, despite the impact of COVID-19 on Africa’s recovery efforts, the continent has achieved several wins.

Songwe said Rwanda’s vaccination of more than 70 percent of its population was a win Africa can emulate, citing that only 17 percent of Africans have been vaccinated, and 53 percent of African countries have vaccines that are not being used.

“Africa will not open, and our economies will not recover if we do not vaccinate,” Vera warned. “The conversations in most forums like this is about vaccine appetite. But when we stand here today, we talk about vaccine success…. We can win by looking at our neighbours, the seven countries on the continent that have managed to vaccinate – succeeded in vaccinating 70 percent of their population, and that’s the first win.”

Songwe underlined that the African Continental Free Trade Area Agreement (AfCFTA) was another win for Africa to boost trade and spur economic growth. She cited that in 2022, not one economy was going into a full-blown debt crisis in Africa.

Africa had traded more with itself than it has in the five years before COVID-19, essentially because Africa had to rely on itself to begin to trade PPEs, she said.

Despite representing just 17 percent of the global population and emitting 4 percent of global pollution, Africa was the worst impacted by climate change.

African economies are losing on average 5 percent of their GDP because of climate change. This has increased to 15 percent in some countries, says Linus Mofor, a senior environmental expert at ECA. He explained that Africa had shown leadership on climate action, with all but two African countries having ratified the Paris Agreement. The Paris Agreement has ambitious Nationally Determined Commitments that require up to $3 trillion to implement.

Noting the unprecedented impact of COVID-19 and climate change on Africa’s quest to realise the 2030 Agenda and Agenda 2063, Director, Technology, Climate Change and Natural Resources Division at ECA, Jean-Paul Adam, said Africa’s current assessments on the implementation progress of the two agendas indicate that most African nations are off-track to achieve the targets and set-goals of the two development blueprints within the set timeframe.

“While a sliver of good news against the COVID-19 pandemic reflects resilience and recovery through vaccines rollouts, health preparedness and responses, Africa has shown its willingness to overcome and prevail over its complex development challenges, Adam told IPS.
IPS UN Bureau Report