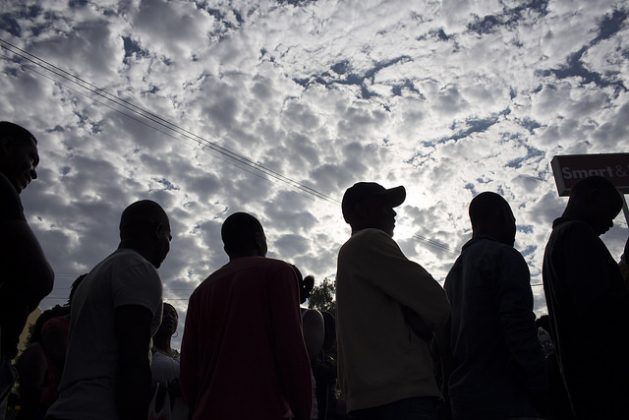 Haitians await news about their immigration status in the border city of Tijuana, in the northwest of Mexico. Credit: Guillermo Arias / IPS

PORTLAND, USA, May 23 2022 (IPS) - Illegal immigration in the 21st century poses a serious dilemma for the world. Governments in virtually every region of the globe appear to be at a loss on how to address the two central dimensions of the dilemma.

The first dimension concerns the continuing waves of illegal migration arriving daily at international borders. The second dimension of the dilemma centers on the presence of millions of men, women, and children residing unlawfully within countries (Table 1). 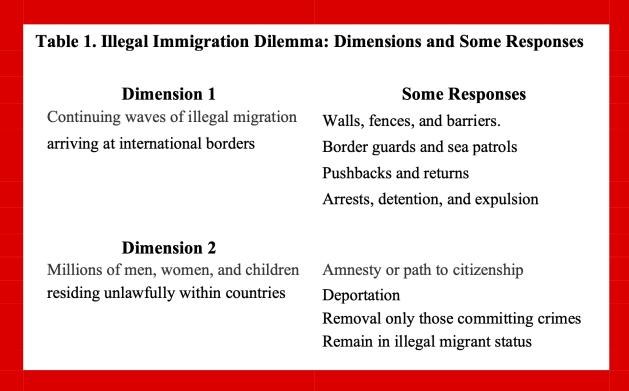 Various aspects of international migration with a focus on the 2018 Global Compact for Safe, Orderly, and Regular Migration were discussed at the first United Nations International Migration Review Forum convened 17-20 May. The primary result of the Forum was an intergovernmental agreed Progress Declaration, which includes calling on governments to intensify efforts for safe and orderly migration, crack down on human smuggling and trafficking, and ensure that migrants are respected and receive health care and other services. However, the 13-page declaration did not come up with explicit guidelines nor enforceable actions that would effectively resolve the illegal immigration dilemma.

First, the demographics aspect clearly shows that the supply of people wishing to migrate largely from developing countries far exceeds the demand for immigrants in developed countries. As a result of that demographic imbalance and despite the costs and risks, millions of men, women, and children are turning to illegal migration in order to take up residence in another country, which are generally wealthy developed nations.

While more than a billion people would like to move permanently to another country, the current annual number of immigrants of several million is just a small fraction of those wanting to immigrate. Also, the total number of immigrants worldwide is also comparatively small, approximately 281 million in 2020, with an estimated quarter of them, or about 70 million, being illegal migrants (Figure 1). 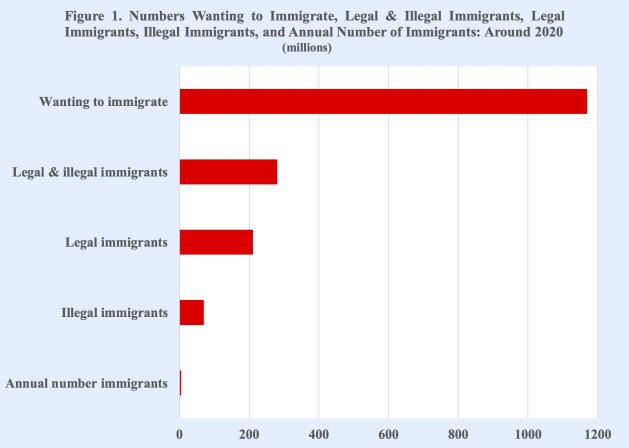 In addition, the numbers of people attempting illegal migration are reaching record highs. In the United States, for example, the number encountered, i.e., arrested or apprehended, at the U.S.-Mexico border in April reached the highest recorded level of 234,088.

The numbers of illegal migrants crossing the Mediterranean Sea to reach the European Union and English Channel to reach the United Kingdom are on the rise again. In the first two months of 2022, illegal border crossings at the EU’s external borders rose 61 percent from a year ago, or nearly 27,000. The British government also reported that the number of illegal migrants arriving in small boats could reach 1,000 a day.

The second fundamental aspect of the illegal migration dilemma involves the asymmetry of human rights concerning international migration. Article 13 of the International Declaration of Human Rights states that everyone has a right to leave any country, including his own, and return to his home country. However, a human right does not exist for one to enter another country without the authorization of that country (Table 2).

In addition, Article 14 of the Universal Declaration of Human Rights provides individuals the right to seek asylum and to enjoy in other countries asylum from persecution. However, to be granted asylum, a person typically needs to be unable or unwilling to return to their country of origin owing to a well-founded fear of being persecuted for reasons of race, religion, nationality, membership of a particular social group or political opinion.

Poverty, unemployment, domestic issues, climate change, and poor governance are generally not considered legitimate grounds for granting asylum. Unfortunately, many of the asylum claims advanced are not genuine, but simply aimed at first entering and then remaining in the destination country.

Once illegal migrants are settled at their desired destination, many businesses, and enterprises profit from their labor. Given their precarious status, illegal migrants are not only willing to work for below normal wages but are also reluctant to report workplace abuses as that can lead to their dismissal, arrest, and repatriation

Most asylum claims are denied but considerable amounts of time, often several years, are needed to reach a final decision on an individual’s claim. Such lengthy periods of time permit claimants to become settled, employed, and integrated into a local community.

In addition to the logistics, governments face economic consequences and public opposition from various quarters to repatriating illegal migrants to countries having high levels of poverty, corruption, and social unrest. Consequently, unless illegal migrants commit serious crimes, they are typically not arrested and deported.

One notable recent exception, however, is the United Kingdom, which is seeking to send illegal migrants to Rwanda. The British government recently announced that those making dangerous, unnecessary and illegal journeys to the UK may be relocated to Rwanda to have their claims for asylum considered and to rebuild their lives there.

Once illegal migrants are settled at their desired destination, many businesses, and enterprises profit from their labor. Given their precarious status, illegal migrants are not only willing to work for below normal wages but are also reluctant to report workplace abuses as that can lead to their dismissal, arrest, and repatriation.

Faced with continuing waves of illegal migrants, many countries are building walls, fences, and barriers, increasing border guards, having more pushbacks, returns and expulsions, and establishing more detention centers. However, based on recent illegal migration levels and trends, those and related steps have not achieved their desired goals.

Joseph Chamie is a consulting demographer, a former director of the United Nations Population Division and author of numerous publications on population issues, including his book, “Births, Deaths, Migrations and Other Important Population Matters.”