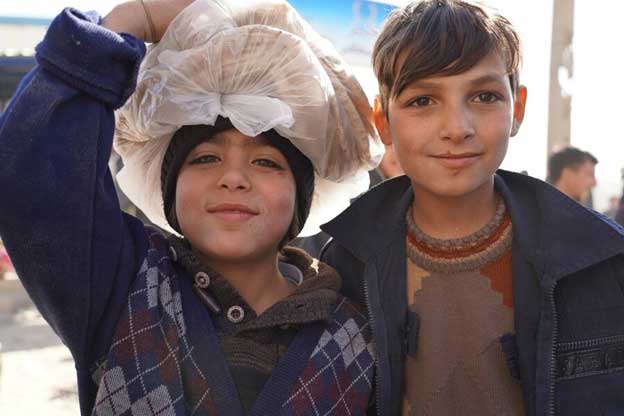 Two boys collect fresh bread for their families at a bakery rehabilitated by WFP in Aleppo. Credit: WFP/Jessica Lawson. May 2022.

Syria remains one of the World Food Programme’s biggest emergencies, and the numbers are staggering. A quarter of all refugees in the world are Syrian and they have sought safety in 130 countries. Meanwhile, the war in Ukraine has made a political solution in Syria even more unlikely. Meanwhile, the humanitarian situation is deteriorating dramatically.

ISTANBUL, May 20 2022 (IPS) - Moscow’s decision to intervene militarily in Syria in 2015 effectively preserved the Assad regime in Damascus. Russian air power and intelligence support, along with Iranian-backed militias on the ground, allowed the regime to beat the opposition and brutally reassert its control over much of Syria.

Since March 2020, the conflict seems to be entering a new period of stalemate with the delineation of three distinctive territories with static frontlines.

Yet this latest de-escalation phase is inherently volatile and has persisted chiefly thanks to the Russian-Turkish fragile entente in north-western Syria and the US interim but still ongoing presence in north-eastern Syria.

Ultimately, Assad’s endgame is to regain control of all the Syrian territory, and he has shown no signs of commitment toward negotiating a peaceful epilogue to the conflict.

Assad believes he has time on his side. In the West and in the region, there is lagging support for regime change in Damascus and adopting an alternative framework for a gradual transition towards ‘peace’.

Even Assad’s opponents seem to have pragmatically abandoned their initial objective of toppling the regime and are primarily seeking to preserve a form of autonomy instead. Nevertheless, without an agreement with Damascus all forms of autonomous governance in Syria are vulnerable and dependent on temporary arrangements among the foreign backers of the different ‘authorities’ on the ground.

Assad’s capacity to reclaim undivided authority over Syria depends on the continuous support of his allies, but so does his survival. The precarious state of Syria’s economy, US and EU sanctions, and severely damaged infrastructure constantly threaten the state’s integrity and capacity to maintain its institutions. To prevent a structural collapse of the Syrian state, both Russia and Iran are playing pivotal roles.

Iran provides oil, gas, and funds, while Russia provides security and diplomacy to accelerate Assad’s regional and international rehabilitation, which is synonymous with investments and financial aid. Thus, it is safe to assume that Syria is particularly exposed to the Ukraine war’s fallout as Russia is expected to divert its attention and resources away from the region.

A distracted Russia in Ukraine has several implications on Syria’s current state of affairs – but to varying degrees. Militarily and security-wise, even though Turkey or the US could exploit Russian weaknesses in Syria to challenge the status quo, it is highly doubtful as it would demand further commitment to Syria, and currently there does not seem to be an appetite to engage more.

Geopolitically, the Ukrainian conflict may lead to structural changes in neighbouring security complexes and further strengthen Turkey and Iran as regional powers. Still, the extent of its impact on Syria is also limited. Instead, it is primarily worsening economic and humanitarian conditions from which Syrians are likely to suffer.

Although Moscow does not back Damascus financially, and Russian exports represent only 3.7 per cent of Syrian imports, the latter depends on critical Russian produces such as wheat and fodder.

Wheat is essential for food security, given the centrality of bread in Syrians’ diets. Syria’s annual need is estimated at around 4.3 million tonnes; in 2021, Syria imported 1.2 million tons and produced only 1.05 million tons resulting in long-hours lines for bread In regime-held areas, and unprecedented hikes in prices.

The deterioration of Syrian food security is not a product of the Russian invasion of Ukraine. Still, it is expected to worsen as access to Russian food products is currently interrupted.

Moreover, alternative food supplies are not easy to find as imports from most countries are compromised by sanctions and the lack of Syrian foreign currency reserves to finance such transactions.

For the time being, Damascus seems to rely on India to compensate for the loss of Russian wheat and fodder. Still, in the long run, the sustainability of such a route is questionable, especially given the increasing costs of supply chains and the growing global inflation rates.

The economic effects of the war in Ukraine have already been felt across Syria. Various products related to wheat and flour production have already seen rapid surges in market prices. The impact is not only felt in regime-held territories but also in north-western and north-eastern Syria, which previously did not suffer from a lack of access to international markets.

The rise in prices has also impacted humanitarian aid. In March, the national average cost of the World Food Programme’s standard food basket increased by 24 per cent over one month. Similarly, the health sector has been affected. Medical facilities in opposition-held areas rely entirely on international funding to provide essential services and medication.

In addition to the disruption in supply chains and increased costs, allocated funds for the sector dropped by more than 40 per cent in the last ten months, resulting in the closure of hospitals and vital services.

Finally, the Russian-Western diplomatic confrontation and the lack of a political venue for de-escalation would potentially threaten the delivery of humanitarian assistance to Syria. The UNSC’s unanimous adoption of resolution 2585 in June 2021 to renew cross-border aid delivery for another 12 months was the result of a US-Russian dialogue that seems improbable as the Ukraine conflict rages on.

The interruption of cross-border aid delivery would demand a quick and effective response to bring relief to the two million civilians and IDPs in need in Idlib and northern Aleppo.

Fundamentally, the Ukrainian conflict will not trigger a paradigm shift in the Syrian conflict. It will instead entrench the status quo, further complicate negotiations over a political transition, and worsen the humanitarian conditions in the country.

The international community believes that food security in Syria is an affordability issue, which justifies the maintenance of sanctions as a lever against Assad. Nevertheless, the most recent dynamics show an increasing availability problem.

To prevent a looming food security catastrophe, humanitarian and donor countries should ensure the continuous flow of humanitarian assistance to Syria, as they should maintain their efforts to compartmentalise aid delivery from political and securities issues.

The Assad regime has shown no signs of relinquishing any of its ‘sovereign rights’ in delivering aid in Syria. However, similar to 2014, desperate times call for desperate measures, and Damascus could be coarse into accepting a new model. But more than ever, Syria needs a different approach to deliver much-needed humanitarian aid.

Sinan Hatahet is a Senior Associate Fellow at Al Sharq Forum and advises a number of think tanks on Syria. Previously, he headed the media office of the Syrian National Coalition.