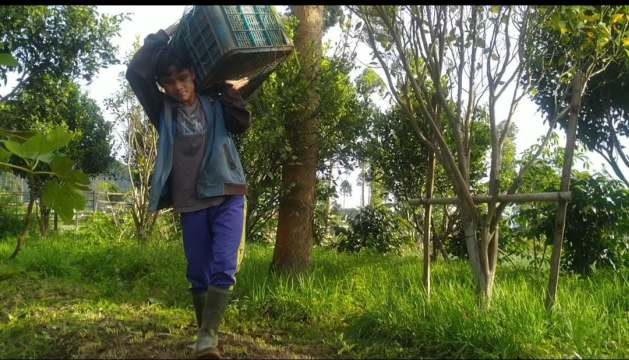 CIWIDEY, West Java, Indonesia, Jun 24 2022 (IPS) - It appears to be business as usual at the Al-Ittifaq pesantren, the local term for an Islamic boarding school. Yadi and Rezki, both 18, join the subuh, pre-dawn prayer, in the local mosque. After a session of religious meditation, along with other santris, or students, the two study science in a pre-dawn class for about 30 minutes.

Once the session ends, the students know where to go and what to do. They pick up a hoe, shovel and machete and walk together to the school’s farm. The ustadz, or teacher, divides them into groups and issues instructions.

Soon the students no longer look like learners but like young farmers working the land. “This is part of our class lessons. We do this every day,” said Yadi, who is busy planting seeds. “I am planting green onion. But my friends are harvesting it in other side of this farm.”

Soon more business, job and career opportunities will be available in villages than in cities. With digitalization the future for the young generation is in villages

The pesantren environment seems ideal for farming. Located in a hilly, mountainous area of Ciwidey, West Java, 170 kilometres or about a 4-hour drive from Jakarta, Al-Ittifaq compound is surrounded by green, in a temperature that hovers between 18C and 22C – cold by tropical standards.

Orange grove — with a surprise

Senior teacher Anwar Mustiawan shows a reporter an area where leafy orange trees with white trunks are growing — and what makes the pesantren unique is revealed. Arranged in neat rows, some trees are over two metres tall, others less than one metre. The soil under each one is covered with a tarpaulin, and under it is a sensor that measures the temperature and humidity of the soil. A water hose is attached to each tarpaulin and connected to an auto-watering machine, which joins a huge water tank.

“The machine decides, based on the soil temperature, when to water the soil,” Anwar said. “This is what digital farming technology is all about,” he added.

He also pointed out that the auto-watering machine isn’t used for all crops. “Our students should know the soil temperature and when it is time to water them,” Anwar said.

Also on hand is Aziz Elbehri, the senior economist who leads the 1,000 Digital Villages Initiative (DVI) at the Food and Agricultural Organization (FAO) in the Asia-Pacific region.

“We are promoting sustainable, resilient and digitalized agricultural and farming practices by assisting policy makers, national and local government to meet the targets of the Sustainable Development Goals (SDGs) by 2030,” Elbehri told IPS as he visited the pesantren on 27 June.

“This use of technology needs to be spread and replicated to other rural communities,” he added.

While Al-Ittifaq is at the heart of a thriving farming community, digitalization is giving its inhabitants a further boost.

Everything produced on the farm goes to the Ittifaq cooperative, where students sort, grade, pack, wrap and label items. The enterprise supplies local supermarkets, malls and wholesalers with vegetables and fruits. It also purchases produce grown by local farmers, who have been its business partners since it was established in 1977.

The organization sends at least five tonnes of various vegetables daily to major cities in Indonesia, said the cooperative’s head, Agus Setia Irawan. “The demand is increasing because our product is highly competitive, which suggest that local farmers are capable of producing quality vegetables and fruits.”

That Al-Ittifaq practices organic farming is what makes the difference. “It is public knowledge that our products are planted, grown and processed in a sustainable and environmentally friendly way,” Agus added. 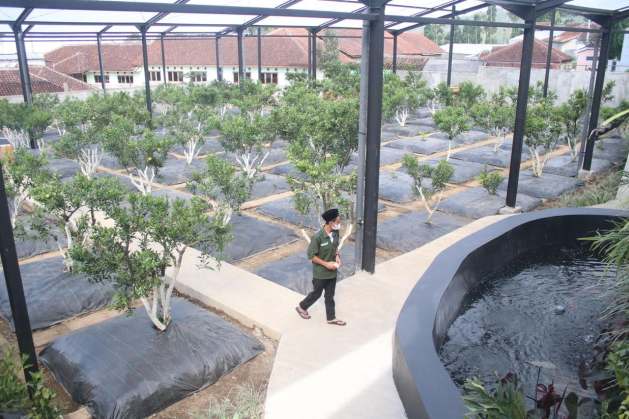 Orange trees growing with the help of a digital watering system attached to the water tank on the right side. Al Ittifaq farm, Ciwidey, West Java, Indonesia. Credit: Kompas

The proceeds of the business are used to finance the Ittifaq educational operations. “Our syeikh taught us that a good person is financially self-reliant and does not hope for charity. He makes it into reality. This pesantren is financially self-financing,” said Rezki, another student.

Al-Ittifaq also employs local residents to work on its 14-hectare farm, so that students and local residents toil together. “There are hundreds of people, most of them women, working with us in shifts. We are like a big family here,” Refky added.

The cooperative also partners with five farmers’ groups, each one consisting of 300 farmers who work 70 hectares of land.

Not only has the pesantren made big steps in the agro-industrial business, it has also become the centre of agricultural and agribusiness training for residents, in collaboration with 20 other pesantren in West Java.

And as part of the digitization drive, Ittifaq has started online marketing. Agus said the cooperative has adopted the so-called business-to-business-to-consumer model (B2B2C). By partnering with other businesses, its online e-commerce efforts are able to reach new markets and customers.

“Our virtual marketing is made through an online agricultural store called Alifmart, which offers several features, including a catalogue of products, purchasing mechanism and customer service,” he said.

FAO Representative in Indonesia Rajendra Aryal said that with more and more people having access to the internet, digital agriculture is becoming a main vehicle for transforming Indonesia’s food system.

“Indonesia is an archipelagic country that is struggling to give its people wider access to economic resources. Digitalization of agriculture is coming into play now,” he said.

West Java’s administration has set the target of digitalizing 104 villages in the province in 2022.

“The villages are selected because they don’t have access to the internet yet. But we have been building internet infrastructure during the last two years. Soon, they are not in the blank spot anymore,” said the head of the West Java Communication and Information Office, Ika Mardiah. “And soon the villages’ potential and products, will be in e-commerce, online transactions and promotion,” she added during a meeting with FAO officials on 26 June.

To date, Mardiah’s office has incorporated 4,225 village enterprises in West Java into the digital business network under her management. “This involves more than 400 products, 12.8 million customers and a huge amount of money,” she said.

According to West Java Governor Ridwan Kamil, soon more business, job and career opportunities will be available in villages than in cities. “With digitalization the future for the young generation is in villages,” he added at the meeting.

Kamil’s administration has succeeded in building three thematic digital villages: one focused on health, which use technology to address the lack of health facilities and specialized doctors. Patients in five pilot areas are able to consult a family doctor online.

The multimedia digital village provides capacity building in digital content-making skills for villagers in the province, while education digital villages are equipped with a so-called Smart Router as a source of education materials that can be accessed by all village residents. The materials are regularly updated.

A global initiative inspired by FAO’s Director-General, Mr QU Dongyu, the DVI is being piloted throughout the Asia-Pacific region. Ciwidey is among many communities being showcased and sharing its advancements with other villages and areas in Asia-Pacific as well as other regions of the world.