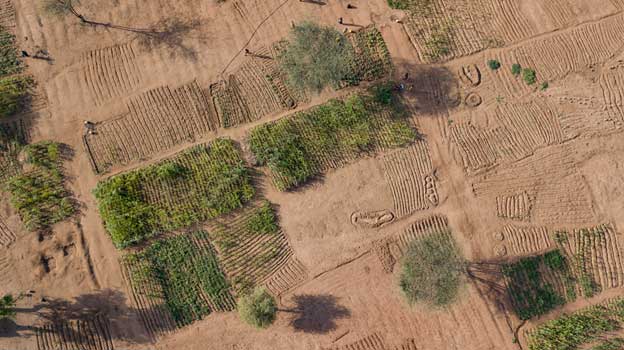 BONN, Germany, Jun 1 2022 (IPS) - Land is our lifeline on this planet. Yet ‘business as usual’ in how we manage land resources puts our own future on planet Earth in jeopardy, with half of humanity already facing the impacts of land degradation.

As we mark the 50th World Environment Day, let us accelerate efforts to meet global pledges to restore by 2030 one billion degraded hectares — an area the size of the USA or China — to stem the loss of life and livelihoods and secure future prosperity for all.

We need to move fast—and together—to realize these commitments through tangible action and effective investments. In doing so, we may find that the answer to some of humanity’s biggest challenges is right beneath our feet.

It was against the backdrop of multiple global challenges, including the worst-in-40-years drought in Eastern Africa, as well as food and economic crises fuelled by the ongoing COVID-19 pandemic and conflicts, that 196 nations came together in Abidjan, Côte d’Ivoire from 9-20 May for the 15th Conference of Parties (COP15) of the United Nations Convention to Combat Desertification (UNCCD).

At the 9 May Summit convened by Côte d’Ivoire President Alassane Ouattara, leaders adopted the Abidjan Call, which reinforces the commitment towards achieving land degradation neutrality by 2030. Simply put, this means ending land loss by avoiding, reducing and reversing the damage we do to our forests, peatlands, savannahs and other ecosystems.

The leaders’ call to action comes in response to a stark warning by the UNCCD’s flagship Global Land Outlook report that up to 40% of all ice-free land is already degraded, with dire consequences for climate, biodiversity and livelihoods. Business as usual will, by 2050, result in degradation of 16 million square kilometres (almost the size of South America), with 69 gigatonnes of carbon emitted into the atmosphere.

But it is not all doom and gloom. The report underscores that investing in large-scale land restoration is a powerful, cost-effective and viable pathway to restore our communities, economies, health and much more.

Restoring one billion hectares of degraded lands will add 50% to the global GDP, help tackle climate and biodiversity crises, boost water and food security, and chart a new path to post-pandemic recovery. It would also attenuate seemingly unrelated crises such as forced migration: land restoration would help reduce the estimated 700 million people at risk of being displaced by drought by 2030.

At the conclusion of two-week negotiations in Abidjan, countries sent a united call about the importance of healthy and productive land for securing future prosperity for all and for boosting drought resilience the world longs for.

Exacerbated by land degradation and climate change, droughts are increasing in frequency and severity, and may affect an estimated three-quarters of the world’s population by 2050, according to the Drought in Numbers 2022 report from UNCCD. Recognizing drought as a serious threat to humanity, UNCCD parties agreed to step up collaboration to explore new policies at the regional and global levels, working together towards COP16 in Saudi Arabia.

With 38 decisions taken at COP15, the Convention will be able to anticipate and act on the changes to the land that may unfold in the years to come. As one concrete example of COP15 decisions, a global database will be developed to help countries to map the exact location of the one billion hectares earmarked for restoration, and to track progress of their restoration in a systematic manner.

This will help the international community to check action against the targets at the national level. More importantly, it will help countries to make well-informed decisions.

At this year’s World Economic Forum in Davos, which came hot on the heels of UNCCD COP15, I argued for greater involvement of food and land-use sectors, which represent about 12% of global GDP and up to 40% of employment, in land restoration and drought resilience efforts.

The Abidjan COP15 was transformational in many ways, not least of them a growing recognition of the essential role of good governance for effective land restoration and drought resilience.

COP15 agreed on policy actions to enable land restoration through stronger tenure rights, gender equality, land use planning and youth engagement to draw private sector investment in conservation, farming and land use practices that improve the health of the land.

Take gender equality, for instance. Although women make up nearly half of all agricultural workforce, they only hold 18% of the associated land titles in sub-Saharan Africa. Furthermore, women are twice more affected by desertification, land degradation and drought compared to men, according to a new UNCCD study released at the Gender Caucus at COP15.

Yet, when empowered, women can be at the forefront of global land restoration efforts, as examples from around the world—from Nepal to Jordan to Paraguay—demonstrate. Decisions taken at COP15 seek to promote women’s involvement in land management and restoration efforts by strengthening their rights and facilitating access to finance.

UNCCD is a trailblazer among international environmental treaties in acknowledging that we cannot reverse land degradation without secure land tenure. People with secure tenure know that when they invest in the land, they will reap the benefits; they are more motivated to protect the long-term health and productivity of their land.

Secure tenure is not only important to small-scale farmers, indigenous peoples and local communities—it is just as important to those making large-scale investments in land degradation neutrality and restoration. Otherwise, it can become a source of tension or conflict over natural resources. At COP15, countries agreed to build on existing guidance on land tenure to ensure the inclusive and meaningful participation of all actors in efforts to combat land degradation.

Youth makes up most of the population in countries affected by desertification, land degradation and drought. And in many of these countries, land-based sectors are the mainstay of the economies. That’s why the Youth Forum at COP15 focused on supporting land-based youth entrepreneurship, securing decent land-based jobs, and strengthening youth participation in the Convention. Beyond better land stewardship, it could go also go a long way towards reducing social unrest resulting from high youth unemployment rates.

Climate change, biodiversity loss and land degradation pose existential threats to nature and humanity. The linkages between them have been clearly established. Our actions to address them must also be interlinked and coordinated as there is no pathway to achieving our goals on climate, biodiversity or land without tackling them together.

As the international community gathers in Stockholm this week to mark the 50th anniversary of the landmark United Nations Conference on the Human Environment, we must make this decade one of urgent action, restoration and transformation, uniting the land, biodiversity and climate agendas for the survival of people and the planet.

This World Environment Day with its theme “Only One Earth”, let us have the same sense of urgency and solidarity that guided our predecessors at the historical Stockholm 1972 conference. Fifty years on, this truth still holds — this planet is our only home.