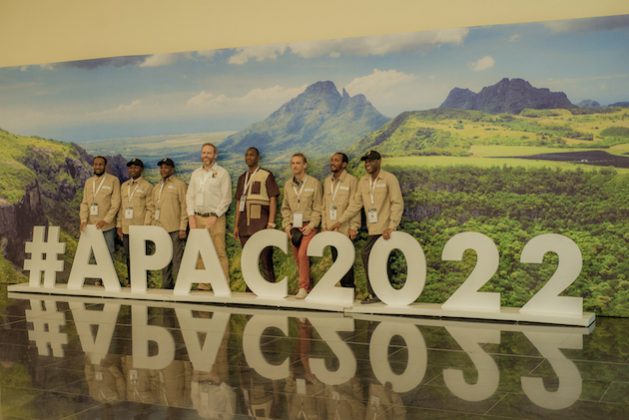 The Africa Protected Areas Congress (APAC), the first-ever continent-wide gathering of African leaders, citizens, and interest groups, gathered in Kigali from Monday, Jul 18 to Jul 23 to discuss the role of protected areas in conserving nature. Rwanda hosted the conference in partnership with the International Union for Conservation of Nature (IUCN) and the African Wildlife Foundation (AWF). CREDIT: Aimable Twahirwa/IPS

Kigali, Jul 21 2022 (IPS) - For many years, East African countries were considered wildlife trafficking hotspots. Now conservation organisations have started to mobilise all stakeholders to combat the illegal trade that targets animals – some to the edge of extinction.

“A slight progress has been made in combatting the illicit trade of wildlife and their products, but Governments from the region still face grave challenges posed by the fact that they are mostly single-species focused on their conservation efforts,” Andrew McVey, climate advisor at World Wildlife Fund (WWF) from East African region told IPS.

According to experts, while countries are committed to cooperation and collaboration to combat poaching and illegal wildlife trafficking within the shared ecosystems, organised criminal networks are cashing in on elephant poaching. Trafficking ivory has reached unprecedented volumes, and syndicates are operating with impunity and little fear of prosecution.

Delegates at the first Africa Protected Areas Congress (APAC) noted the lack of strict sanctions and penalties for illegal activities and limited disincentives to prevent poaching, trafficking or illicit trade impacted efforts to counter wildlife trafficking across the region. The gathering in Kigali was organised by the International Union for Conservation of Nature (IUCN).

Fidele Ruzigandekwe, the Deputy Executive Secretary for Programs at the Rwandan-based Greater Virunga Transboundary Collaboration (GVTC), told IPS that sharing information, community empowerment and enforcing laws and judiciary system were among crucial factors needed to slow the illegal trade of wildlife. The GVTC is a conservation NGO working in Greater Virunga Landscape across transborder zones between Rwanda, Uganda, and the Democratic Republic of Congo (DRC).

“There is also a need to rely on technology such as high-tech surveillance devices to combat wildlife poachers and traffickers,” Ruzigandekwe added.

Elephant tusks are of high value in the Far East, particularly in China, Vietnam, the Philippines, and Malaysia, where many use them for ornamentation and religious purposes. Both scientists and activists believe that despite current mobilisation, the demand is still increasing as transnational syndicates involved in wildlife crime are exploiting new technologies and networks to escape from arrests, prosecutions, or convictions

Although some experts were delighted to note that countries had made some progress in cooperating to fight trans-border wildlife trafficking, estimates by NGO TRAFFIC indicate that about 55 African Elephants are poached on the continent every day.

INTERPOL has identified East Africa as one of several priority regions for enhanced law enforcement responses to ivory trafficking.

Reports by the INTERPOL indicate that law enforcement officials recently discovered an illegal shipment of ivory inside shipping containers, primarily from Tanzania. It was to be transported to Asian maritime transit hubs.

Both scientists and decision-makers unanimously agreed on the need to mobilise more funding to support measures to tackle ivory trafficking.

“Duplication of conservation efforts and inadequate collaboration among countries has been one of the greatest challenges to implementation,” Simon Kiarie, Principal Tourism Officer at the East African Community (EAC) Secretariat, told IPS.

To cope with these challenges, member countries of the EAC, including Kenya, Tanzania, Uganda, Burundi, South Sudan, and Rwanda, have jointly developed a Regional Strategy to Combat Poaching and Illegal Trade and Tra­cking of Wildlife and Wildlife Products which is being implemented at the regional and national levels.

During a session on the sidelines of the congress, many delegates expressed strong feelings that when the elephant population is threatened by poaching, local communities suffer too.

“Through the illegal trade in wildlife, local communities lose socially and economically important resources (…) the benefits from illegal wildlife trade are not shared among communities,” Telesphore Ngoga, a conservation analyst at Rwanda Development Board (RDB), a government body with conservation in its mandate told IPS.

The Rwandan Government introduced a Tourism Revenue Sharing programme in 2005 to share a percentage (currently 10%) of the total tourism park revenues with the communities living around the parks.

The major purpose of this community initiative is to encourage environmental and wildlife conservation and give back to the communities living near parks, who are socially and economically impacted by wildlife and other touristic endeavours.

Manasseh Karambizi, a former elephant poacher from Kayonza, a district in Eastern Rwanda, who became a park ranger, told IPS that after being sensitised about the dangers of wildlife hunting, he is now aware of the benefits of wildlife conservation.

“Thanks to the income generated from tourism activities from the neighbouring national park, communities are benefiting a lot. I am now able to feed my family, and my children are going to school,” the 46-year-old father of five said.