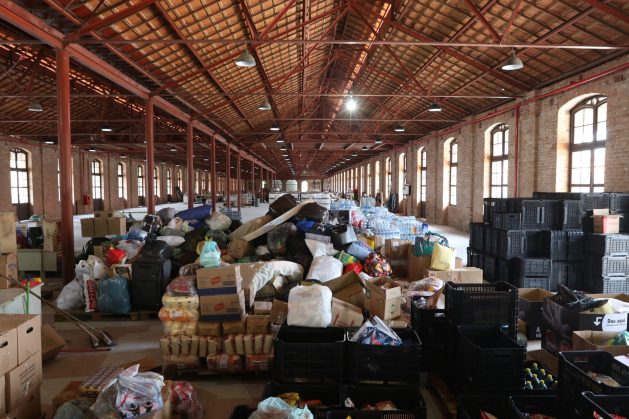 The large Citizen Action warehouse in downtown Rio de Janeiro is filled with food donated by people in solidarity for distribution to poor and hunger-stricken communities. There are 33.1 million Brazilians suffering from hunger, according to a survey by a network of researchers on the subject. CREDIT: Tânia Rêgo /Agência Brasil

RIO DE JANEIRO, Jul 5 2022 (IPS) - A campaign against hunger, a problem that affects 15.5 percent of the Brazilian population, seeks to mobilize society once again in search of urgent solutions, inspired by a mass movement that took off in the country in 1993.

“Now it’s more difficult, hunger has spread throughout the country, in cities where there was none, it has expanded,” said Rodrigo Afonso, executive director of Citizen Action, one of the social organizations spearheading the campaign.

“Besides, society is anesthetized with so many tragedies, exhausted after two years of the COVID-19 pandemic, so many losses,” he lamented in an interview with IPS.

"Now it's more difficult, hunger has spread throughout the country, in cities where there was none, it has expanded." -- Rodrigo Afonso

And we cannot count on the current government, which in addition to deactivating policies that had been strengthening food security, adopted negative measures, the activist added, saying that for now they are looking towards civil society and companies.

“Brazil feeds one billion people in the world, we provide food security for one-sixth of the world’s population,” President Jair Bolsonaro exaggerated in his speech at the Summit of the Americas on Jun. 10 in Los Angeles, California.

But according to Brazilian agricultural researchers, who made a simple calculation based on the country’s growing grain production, Brazil’s food exports feed 800 million people.

If Brazil accounts for 10 percent of the world’s grain production, about 270 million tons this year, according to the Ministry of Agriculture, Livestock and Supply, then it feeds 10 percent of humanity.

The country is the world’s largest producer of soybeans, coffee and sugar, as well as the largest exporter of meat. 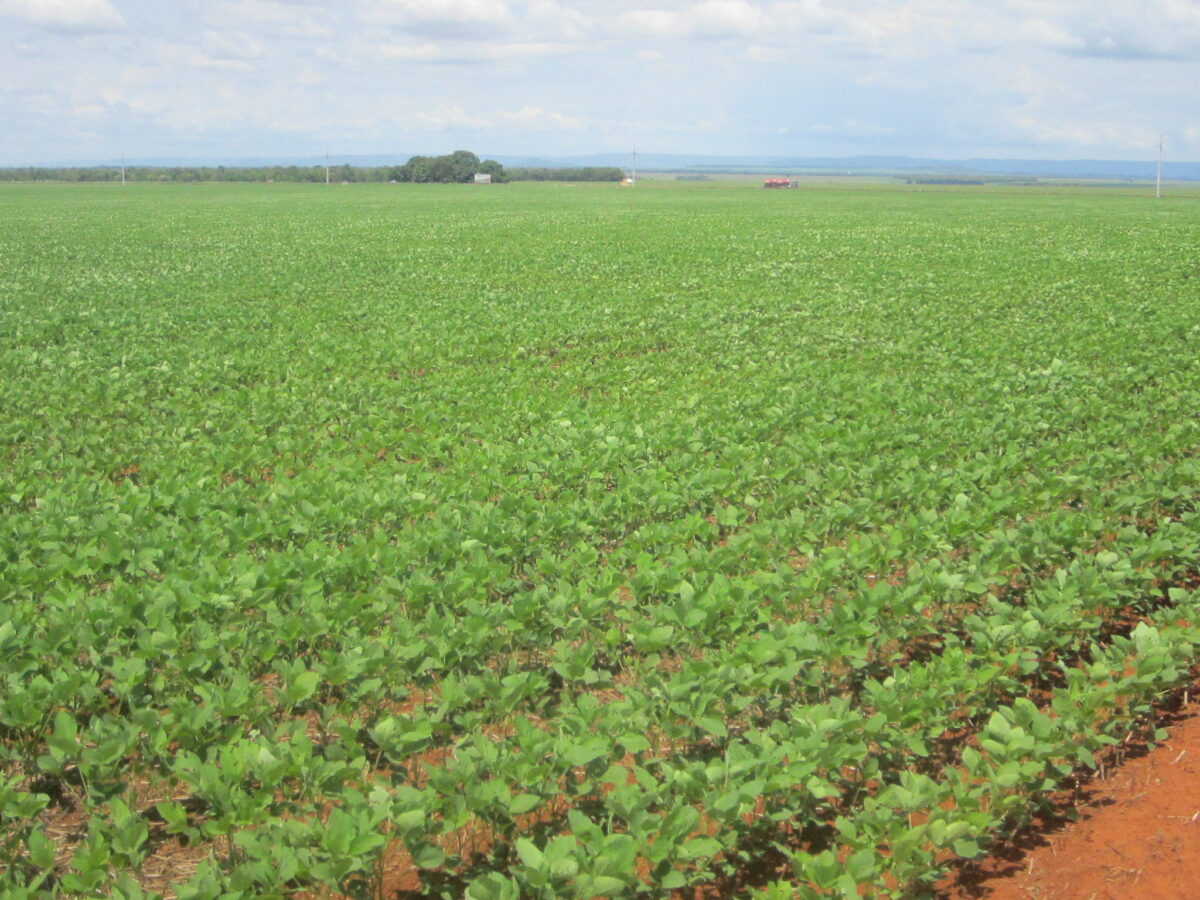 A green sea of soy is the landscape in vast areas of Brazil, especially in the midwest and southern regions of the country. They are held up as the “success” of Brazilian agriculture, which, according to President Jair Bolsonaro, feeds one billion people around the world. But paradoxically, 33.1 million Brazilians suffer from hunger. CREDIT: Mario Osava/IPS

Food for other countries, shortages at home

But the production boasted of by political leaders and large agricultural producers is basically destined for export and livestock feed. Brazilians consume only a small portion of the corn and an even smaller portion of the soybeans the country produces – most of it is exported or used for animal feed.

At the same time, Brazil is a net importer of wheat and beans, key products in the diet of the country’s inhabitants. And the production of rice, another staple, just barely meets domestic demand.

Bolsonaro and his far-right government, closely allied with export agriculture, seek to defend a sector that faces international criticism, due to its association with deforestation in the Amazon rainforest, harassment and mistreatment of indigenous peoples and the overuse of agrochemicals.

The hunger faced by 33.1 million Brazilians – 15.5 percent of the population – as reported by the non-governmental Brazilian Network for Research on Food and Nutritional Sovereignty and Security (Penssan), further tarnishes the image of this country, a major food producer.

Penssan, headed by researchers from universities and other public institutions, but open to all interested parties, released its second National Survey on Food Insecurity in the Context of the COVID-19 Pandemic on Jun. 8.

The study based on data collected between November 2021 and April 2022 pointed to a 73 percent increase over the 19.1 million hungry people reported in the first edition, published in late 2020.

In other words, in just over a year of pandemic, the number of people suffering from severe food insecurity or frequent food deprivation increased by 14 million: from nine to 15.5 percent of the Brazilian population, today estimated at 214 million.

The crisis especially affects people in the North and Northeast (the poorest regions), blacks, families headed by women and with children under 10 years of age, and rural and local populations that also suffer from water insecurity. Inequalities have intensified. 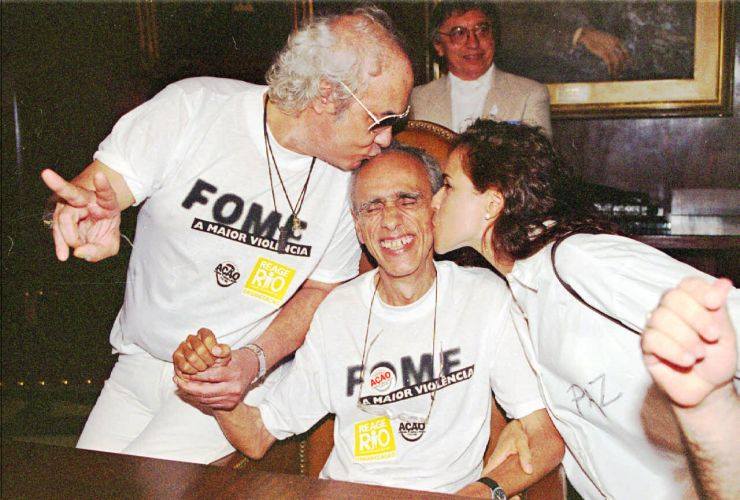 Wearing a T-shirt reading “Hunger, the greatest violence”, Herbert de Souza, Betinho (C), is honored as a symbol of the Brazilian fight against hunger. He led a massive campaign starting in 1993 and unleashed a process that allowed Brazil to be removed from the FAO hunger map in 2014. But the country returned to the map in 2018 and hunger worsened with the pandemic and the government of far-right President Jair Bolsonaro in 2021. CREDIT: Facebook

Reviving the movement against hunger

To face this new emergency situation, Citizen Action called a National Meeting against Hunger, which brought together representatives of social movements, non-governmental organizations and food security councils that operate in the Brazilian states, from Jun. 20 to 23 in Rio de Janeiro.

The meeting approved a letter addressed to the public with a proposal for ten priority measures, ranging from an increase in the national minimum wage to a fair tax reform, the resumption of agrarian reform and the demarcation of indigenous lands, interrupted under the current government, and the restoration of food security policies also abolished under the Bolsonaro administration.

These demands will serve as the basis for the new anti-hunger campaign that will be officially launched in the coming weeks, Afonso announced.

The present outlook is due to the economic crisis Brazil has been suffering since 2015 and the pandemic, aggravated as “a product of recent government decisions, which dismantled food security policies and imposed new contrary measures,” the executive director of Citizen Action told IPS.

The Bolsonaro administration has not raised the minimum wage, for example, merely adjusting it each year to keep up with the official inflation rate. The current inflation rate of 11.73 percent accumulated in the 12 months up to May reduces the purchasing power of the minimum wage month by month.

The minimum wage, set at 1,212 reais (233 dollars) a month for this year, is no longer enough to cover the cost of the basic basket of food and hygiene products for a family of four in the southern city of São Paulo, which currently costs 1,226 reais, according to the Inter-Union Department of Statistics and Socioeconomic Studies.

Bolsonaro replaced the Bolsa Familia program with Auxilio Brasil, a stipend of 400 reais (77 dollars) – double the previous amount – to 18 million families, in an attempt to win votes among the poor, a sector in which he is highly unpopular according to polls for the October presidential elections.

But there are “almost three million very poor families” still excluded from the program, who are going hungry, Afonso stressed.

Citizen Action is the non-governmental organization heir to the massive movement unleashed in 1993 by sociologist Herbert de Souza, known as Betinho, which awakened the public to the extent of hunger in the country and mobilized the solidarity of millions of people in municipal, factory, school, neighborhood and community committees.

The campaign, called Citizen Action against Hunger and Poverty and for Life, triggered a process that culminated in the creation of a national food security system, governmental but with broad participation by society in councils at the national, state and municipal levels.

“We still have regional and local committees in all 26 Brazilian states” seeking to collect food donations and mobilize the population to prioritize the fight against hunger, Afonso said.

Many companies support the campaign that will also try to mobilize political leaders, delivering the letter approved at the Meeting against Hunger to all presidential candidates in the October elections, announced the activist, confident in a new awakening of society to the problem, despite the current adverse circumstances.