The writer is the International Project Leader for the Congo Basin Forest, Greenpeace Africa 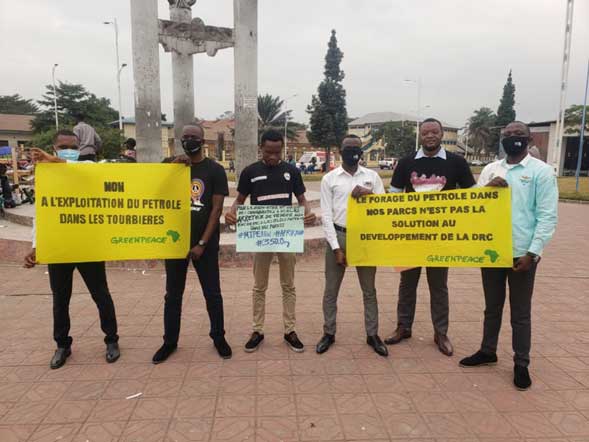 KINSHASA, Jul 26 2022 (IPS) - From the fall-out of the pandemic to the interlocking cost of living and energy security crises currently gripping the world, it has been fascinating to see the world’s richest governments bending over backwards to help fossil fuel companies.

Meanwhile households are battling a cost of living crisis while the climate crisis is raging on, threatening lives and livelihoods everywhere – from north to south.

This latest boon for fossil fuel companies makes the pledges from last year’s COP26 climate talks in Glasgow seem like a distant memory. Indeed, a £420m ($500m) deal for the Democratic Republic of Congo [DRC] has become increasingly useless in protecting its forests, with oil companies set to cash in and eventually paved the way for more forest destruction.

The DRC, home to most territory of the world’s second largest rainforest, prides itself in being a “solution country” for the climate crisis. However, the country, which already sees deforestation rates second only to Brazil, has already stated last year its intention to lift a 20 year ban on new logging concessions.

As of April this year, the DRC is set on trashing huge areas of the rainforest and peatland and – as of this week – it’s set to auction no less than 27 oil and three gas blocks.

Oil exploration and extraction would not only have devastating impacts on the health and livelihoods of local communities, but the oil driven “resource curse” raises the risk of corruption and conflict.

This auction also is sacrificing at least four parts of a mega-peatland complex, often labelled a carbon bomb, along with at least nine Protected Areas (contrary to denials by the Congolese Oil Ministry).

Following the enlargement of the auction this week, it also poses a direct threat (https://www.ft.com/content/5ea6f899-bb55-478f-a14a-a6dd37aae724) to the Virunga National Park, a UNESCO World Heritage Site made famous thanks to a Netflix documentary on a previous campaign to keep the oil industry out of it.

Instead of steering us into a climate catastrophe,the international community must stop serving as the handmaiden of Big Oil. Instead, let’s see them focus on ending energy poverty by supporting clean, decentralised renewable energies. Whether it’s the cost of living crisis unfolding on our doorsteps or climate destruction sweeping the globe – the solutions are the same.

Congolese President Felix Tshisekedi must abandon the colonial notion of development through extractivism and look at its legacy in Africa, which has only deepened poverty and hardship for Africans. It has only served to enrich a small and closed circle of local beneficiaries and foreign nations.

It is telling that Africa’s largest oil producer, Nigeria, is also the one with the highest number of people suffering extreme poverty (just behind India) and with the highest number of people without access to electricity. Instead of following an economic model that hurts both people and nature, the DRC should resist pressures from greedy multinationals and prioritise connecting 72 million of its people to the grid.

You can bet Big Oil is salivating at the chance to seize yet more profits from climate destruction. Yet shamefully, none of the eight members who are part of the Central African Forest Initiative that is paying £420m of taxpayers’ money to protect DRC’s forests – the UK, the EU, Belgium, France, Germany, the Netherlands, Norway, South Korea – have uttered one word against this prospective oil auction.

That’s not surprising, given the “forest protection” deal does nothing to prevent oil activity in peatlands or anywhere else.

As Boris Johnson approaches his final weeks in office, his own environmental legacy and that of the COP26 risk being all targets, no action. Speeches are made and press releases are disseminated, while the rights of vulnerable people everywhere are being run over by short-sighted extractive industries.

Instead, I would like to see donor countries like the UK government, as host of the COP26 and one of the chief architects behind the DRC forest protection deal, to work with my country to move beyond the model of destructive extractivism and leapfrog towards a future of renewable and clean energy for all.