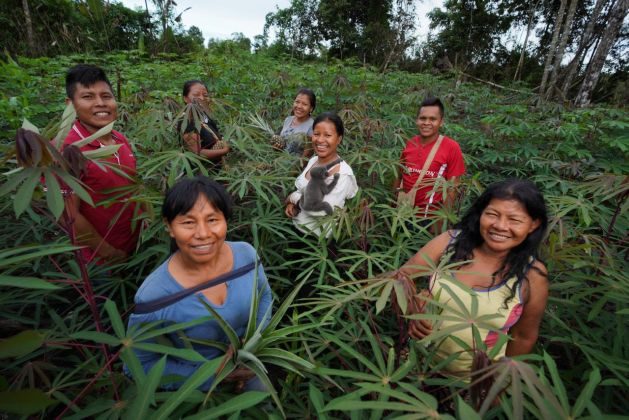 The female guardians of Venezuela’s Imataca Forest Reserve | An FAO-GEF project, which also aims to increase gender equality in the forestry sector, has continued supporting the Kariña women in actively leading the development of their territories and the conservation of the area’s biodiversity. Credit: FAO

MADRID, Aug 8 2022 (IPS) - Nothing –or too little– has changed since Hollywood started producing its spectacular western movies. Rough men, ranchers, mercenary killers, saloons, cowboys, guns, gold fever, the ‘good sheriff’… and the ‘bad indians”. Those movies were anything but fiction–they were real history.

Add to this mix, the deeply-rooted, widely dominating culture of the so-called “white supremacy.”

Consequently, the hollywoodian production has constantly depicted the “indians” as savage and ruthless, uncivilised people who devastate the lands of well-intentioned colonisers, burn their homes, steal their horses, kill them, and hang their skulls as trophies.

The show goes on. And the victims are the same ones: the Indigenous Peoples.

Century after century, the indigenous peoples have been living in their lands in a perfect harmony with Nature, on which their life dependens. They know how to guard precious natural resources and are the custodians of 80% of biodiversity.

But, tragically, the very richness in natural resources which the original people of Planet Earth have been keen to conserve and preserve, soon stood behind their dramatic fate.

Exactly like in those movies, the world’s biggest modern, intrepid cowboys–the giant private corporations, have been systematically depleting those natural resources for the sake of making profits.

The consequences such depletion are, among many others:

They are the ancestors

The number of indigenouos peoples is estimated at nearly 500 million, similar to the combined population of the European Union’s 27 member countries, or the total inhabitants of two of the world’s biggest nuclear powers–the United States and the Russian Federation.

The figure refers to those who identify themselves as being indigenous or indegenous descendents. Many others opt for no admitting themselves as such, due to worldwide growing wave of xenophobia.

According to the United Nations, Indigenous Peoples consider 22% of the world’s land surface their home. They live in areas where around 80% of the Planet’s biodiversity is found on not-commercially-exploited land.

And at least 40% of the 7,000 languages used worldwide are at some level of endangerment. Indigenous languages are particularly vulnerable because many of them are not taught at school or used in the public sphere.

The UN Food and Agriculture Organization (FAO) reports that:

Meanwhile, Indegnous Peoples are considerably abused also by the job markets. According to the International Labour Organization (ILO):

Indigenous women are the backbone of Indigenous Peoples’ communities and play a crucial role in the preservation and transmission of traditional ancestral knowledge, states the 2022 International Day of the World’s Indigenous Peoples (9 August)

They have an integral collective and community role as carers of natural resources and keepers of scientific knowledge. And many indigenous women are also taking the lead in the defence of Indigenous Peoples’ lands and territories and advocating for their collective rights worldwide, the UN further explains.

“However, despite the crucial role indigenous women play in their communities as breadwinners, caretakers, knowledge keepers, leaders and human rights defenders, they often suffer from intersecting levels of discrimination on the basis of gender, class, ethnicity and socio-economic status.”

Poverty, illiteracy, no sanitation, no health services, no jobs…

Besides, their right to self-determination, self-governance and control of resources and ancestral lands have been violated over centuries.

Small but significant progress has been made by indigenous women in decision-making processes in some communities, achieving leadership in communal and national roles, and standing on the protest frontlines to defend their lands and the planet’s decreasing biodiversity.

“The reality, however, remains that indigenous women are widely under-represented, disproportionately negatively affected by decisions made on their behalf, and are too frequently the victims of multiple expressions of discrimination and violence.”