The increasingly severe invasion of seaweed is impacting tourism, health, livelihoods, and the economy of Caribbean countries, which are hoping for a mix of solutions to the stubborn problem. 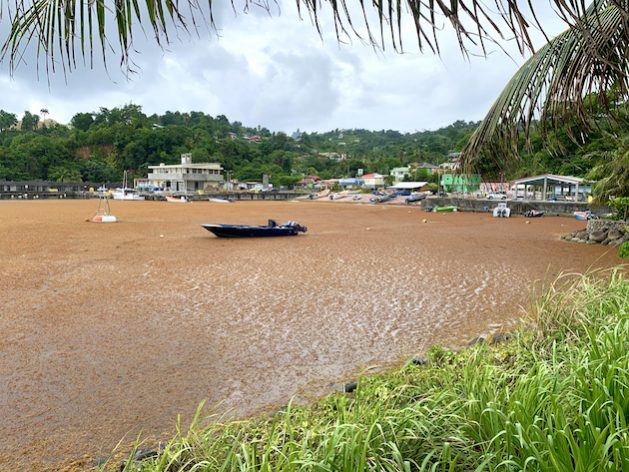 DOMINICA, Sep 2 2022 (IPS) - In June 2022, swathes of matted, putrid seaweed took over the shores of beaches across the Caribbean. It was the worst seaweed influx reported since 2011, when ocean currents began depositing tons of the brown seaweed, known as Sargassum, across the region, leaving authorities grappling with the severe ecological and economic fallout.

For the small island of Tobago in the Southern Caribbean, the impacts were felt across sectors and demographics.

“For about six to nine months of the year, you have an influx of Sargassum seaweed appearing on our shores. That not only affects the fishermen, the hotels and businesses in the area, but it also affects the schools near the affected beaches,” Managing Director of Recycling Waste and Logistics Limited, Shawn C Roberts, told IPS.

Roberts is also the Coordinator at Tobago Recycling Resource Initiative (TRRI), the first multiple materials recovery facility in Trinidad and Tobago and a pioneer in green solutions to environmental problems like waste management.

To tackle Tobago’s seaweed woes, Roberts has turned to earthworms. The process is called vermicomposting and involves the breakdown of organic matter by earthworms and microorganisms.

“It’s a controlled decomposition of the seaweed. It’s nature taking care of nature and so far, it is helping to alleviate this annual invasion of seaweed,” he said.

TRRI has launched the Alleviate Sargassum Action Program. Known as ASAP, program officials organize cleanup exercises on affected beaches. They then blend the collected sargassum with the earthworms and other organic materials like shredded cardboard, grass cuttings, and animal manure to generate compost.

Roberts is hoping that other countries will realize the benefits of vermicomposting for seaweed management.

“You don’t really need any major capital input. If you have your shed, or even trees and shade, you can build your compost piles and monitor them. You just allow the earthworms and other microorganisms like soldier flies to do their job.”

Far away from shore, sargassum is an important sanctuary for marine life. When it is deposited by the ton along coastlines, however, it becomes a health and economic nightmare.

The United Nations Environment Programme has warned that the sargassum’s production of hydrogen sulfide erodes air quality and prolonged exposure is harmful, particularly for people with respiratory issues.

“This is detrimental for coastal residents and beach users, whether local or visitors. Beach users who live elsewhere have the option to avoid impacted locations, while residents may be unable to avoid prolonged exposure,” the UN agency said, in a 2021 white paper.

Some countries, particularly tourism-dependent nations like Barbados, spend millions of dollars annually on emergency clean-ups to rid their beaches of rotting seaweed.

As far back as 2015, academics at the University of the West Indies lamented that it would take ‘US$120 million and more than 100,000 people’ to get rid of the sargassum crisis in the Caribbean.

The calamity has spawned innovation, and Roberts’ initiative in Tobago is one of many across the Caribbean.

The University of the West Indies announced last year that it was spearheading a research project to power vehicles with sargassum seaweed and wastewater fuel.

The researchers said the initiative could help Barbados in its goal of becoming fossil fuel free by 2030, while providing relief from the Sargassum seaweed emergency for the tourism sector.

In Saint Lucia, young biotech entrepreneur Johanan Dujon has been converting sargassum into fertilizers, organic fungicides, and pesticides under his Algas Organics brand.

For Roberts, whose program started composting in October 2021, the goal for the region should be cost-effective and long-term green solutions.

“The ability to harvest sargassum in an environmentally safe practice is a challenge. Quick fixes are costly. If you are not careful, the solution can be very expensive and reactive,” he told IPS.

“As much as you need emergency clean-ups using heavy equipment, many authorities wait until the sargassum starts decaying to react. Our approach lies in having a planned harvesting management system where you have regularly scheduled cleanups. When the sargassum is fresh, that is when you have to target it. Stockpiling creates a backlog that is more difficult and has severe odor. Then it gets overwhelming and affects us all.”

According to researchers at the University of South Florida’s Optical Oceanography Lab which produces monthly sargassum bulletins, in July 2022, the amount of seaweed in the Caribbean Sea was comparable to the historic high of the previous month.

“Vermicomposting presents a great opportunity for our countries,” says Roberts. “It allows less use of manual labor as it depends on the microorganisms to work, it is affordable, and it is natural.”