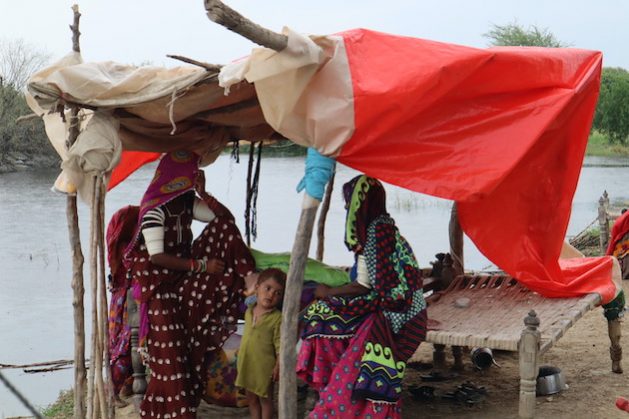 A family evacuated from the floods has not received the promised tents or mosquito nets. Credit: Altaf Hussain Jamali/IPS

Karachi, Sep 25 2022 (IPS) - Last week, for at least six days, hundreds of flood-affected villagers from around the outskirts of Pangrio, a sleepy town in the Sindh province, blocked the main artery – the Thar Coal Road – connecting Badin to neighbouring district of Tharparkar – not allowing any traffic to pass.

They had had enough. With their homes submerged in over 10 feet of water, they had been sleeping under open skies for nearly a month, living in sub-human conditions. Surrounded by contaminated water, disease and death stalked the villagers. If days were spent in the scorching sun, there was little respite in the night as an army of mosquitoes attacked them.

They wanted to return to their villages or whatever was left of those villages. But for that, the water flooding their homes had to recede.

How did Pangrio get so much flood water?

Ghulam Ghaus looked at the dark, ominous water next to the tent and said he lost 60 acres of land on which he had grown cotton, tomatoes and millet. “A week before the water came in, I was happiest as the crops were doing extremely well. We had heard about the floods in other areas, but it had not touched our land, but then overnight, water rushed in and reached four feet, and now it’s just increasing every day.”

According to the Pakistan Meteorological Department (PMD) it rained 177.5mm compared to the average 63.1mm, making July the wettest since 1961. “July 2022 rainfall was excessively above average over Balochistan (+450 per cent) and Sindh (+307pc). Both rank as the wettest ever over the past 62 years,” said the PMD’s monthly summary.

A third of the country has been affected, while over 1,500 people have been killed and a little under 13,000 injured since June 14, according to the National Disaster Management Authority (NDMA).

The provinces of Sindh and Balochistan have been the worst affected, with floods engulfing entire villages, inundating farmlands and wiping out crops. The loss of 1,017,423 livestock has been huge for this agrarian country.

But the flood water in Pangrio was not all rainwater. “This is contaminated water,” said Ghaus, pointing to the dark, stagnant water lapping the edge of the embankment where he was standing. “It is the wastewater from sugar mills of Mirpur Khas that inundated our villages and our land,” he continued.

“It’s actually water from breached Puran Dhoro, an inundation canal, that flooded these villages,” corrected Sindh’s irrigation minister, Jam Khan Shoro. The breaches continued to grow, and on August 28, many villages in four union councils of Badin, “comprising an estimated population of 50,000”, got inundated. 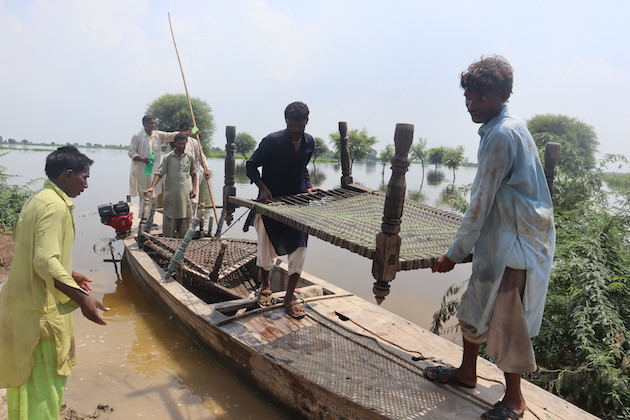 These villagers have been demanding the government drain the water and discharge it into the adjoining district of Tharparkar – but this is an impossible solution, according to the minister.

“We would have to displace and destroy the homes and lands of another 50,000 people,” said Shoro. “That is not justified,” he added.

“Back in the 1920s, before the water of the Indus got reined in by the barrages, Puran was a natural stormwater drain that took out excess water from the Indus during the monsoons when the river swelled and discharged into Shakoor Dhand (a saucer-shaped depression, a seasonal desert wetland, which gets swampy only during a good monsoon) in Tharparkar district with part of it in India,” explained Shoro.

After the barrages were made, the water from the Indus decreased. Then when industries and agriculture increased, Puran’s sweet water mixed with the effluent.

“India objected to Puran’s contaminated discharge into the Shakoor Dhand, and so in the early 80s, with the help of the World Bank, Pakistan began construction of the Left Bank Outfall Drain (that takes water from Nawabshah, Sanghar, Mirpur Khas and Umerkot) which is connected to Puran. It can drain 4,000 cusecs of effluent-mixed water into the Arabian Sea,” Shoro gave the background of the LBOD, a highly controversial drain.

“The LBOD cannot cater to the 13,000 cusecs of the deluge coming from the northern part of Sindh, and we were continuously on the alert that it should not develop breaches,” said Shoro. Now the water pressure has been reduced considerably.

Finally, on the night of September 22, almost a month later, the government plugged the breaches made in Puran, and the water is now going smoothly, going back into the LBOD. It took that long because the canal was in full flood, the current was very strong, and it could only be accessed using boat, explained the minister.

This will allow the water to recede from the submerged villages of Badin and go into the Arabian Sea, said the minister. “But it will take about a month, till the end of the month,” said Shoro.

Tariq Bashir, from flood-affected Mohammad Din village, does not believe this. His village has been surrounded by up to five feet of water since a month ago. “It doesn’t seem to me that the water will recede anytime soon. And even if it goes away and we are able to sow for the next season, the productivity will be very poor as the soil is steeped in acidic water.”

The village of Jerrar Bheel, one of the 15 or so villages, with as many as 70-100 households, on the outskirts of Pangrio, is completely submerged. It is the Sindh you had been watching on your television screen for months.

Inam Baksh Mallah has been rescuing villagers for the last three weeks in his small wooden boat, bringing them to safety on the embankment. “I have not reached most of the marooned people,” he said. The district administration assigned him the task of evacuating the villagers. “I start from 7 am and continue till midnight,” he said.

Along with rescuing people, he also brings whatever belongings people want to be retrieved from their submerged homes. Rope beds seemed to be the most coveted. “It is dangerous to sleep on the floor of the embankment with water on both sides,” said Jama Malook, mother of eight, who fears the snakes from stagnant water may slip in the night and bite her family. She was able to retrieve four beds from her home.

Ghulam Mustafa, a farmhand, waved at what has now become a lake and said: “This is about eight to 10 feet deep, and till three weeks ago, you could see standing crops of cotton and jantar (a kind of grass used for fodder); these were ready to be harvested.”

The submerged villages, just their rooftops visible, seemed to be gasping for the last breath before going underwater completely.

Malook, a woman, was able to evacuate from the village to the embankment walking in “chest-deep water” just in time. But lost 25 sheep to it. “I helped our elderly neighbour, Rehmat”, while her husband carried her paralyzed 90-year-old mother, Baghi Khabar, to dryland.

Lying inside an airless tent, Khabar has stopped eating for the past two days and fails to recognize her loved ones, said Malook. She and her sister-in-law take turns cleaning her every few hours as she is incontinent.

“It is not easy to take care of her here, in the open sky,” said Malook. “It takes us about 20 minutes to fetch water because we do not have big enough containers to store water in. So we make several rounds in a day, and it gets exhausting in this heat,” she informed, adding back home the tap was just outside their mud house.

If there is one thing Shoro is sure of after seeing the suffering of people like Malook and other villagers, it is “we should not interfere with nature”. He referred to the man-made LBOD that changed the natural water course to travel from Puran Dhoro to Shakoor Dhand.