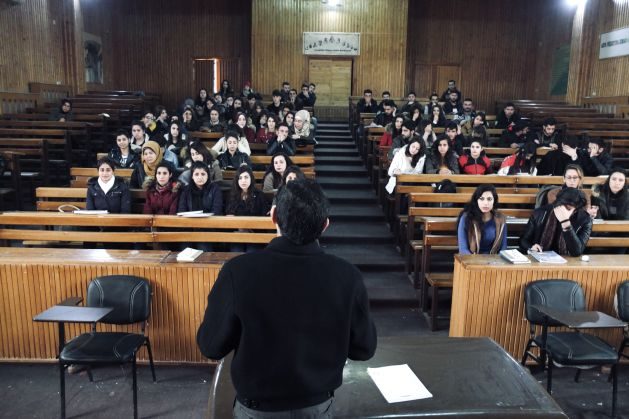 Just another day in the main hall of the Qamishli campus. Credit: Karlos Zurutuza/IPS

QAMISHLI, Syria, Sep 27 2022 (IPS) - There is a main hall as well as workshops, laboratories and, of course, a cafeteria, where the half-hour break flies by amid card games and laughs. It could well be any university if it wasn’t for those men armed with assault rifles at the entrance.

This is the campus of University of Rojava in Qamishli (700 kilometres northeast of Damascus), an institution that opened its doors in October 2016, in the midst of a war that still rages on.

The Kurdish minority in Syria coexists with Arabs and Syriacs in the so-called Autonomous Administration of North and East Syria (AANES). It's in this corner of Syria, which shares borders with both Turkey and Iraq, where such a network of universities has been built. It now rivals the institutions of the Syrian Arab Republic government

“Lessons in the Kurdish language are one of our hallmarks,” Rohan Mistefa, the former dean, tells IPS from an office on the second floor. Other than the language of instruction, significant differences from other Syrian universities are also visible in the curriculum.

“We got rid of subjects such as Ideology and History of the Baath Party (in power in Damascus since 1963) and replaced it with `Democratic Culture,'” explains this Kurdish woman in her mid-forties. The creation of a Department of Science for Women (Jineoloij, in Kurdish), she adds, has been another milestone.

The University of Rojava hosts around 2,000 students on three campuses. There are, however, two other active universities in Syria’s northeast: Kobani, working since 2017, and Al- Sharq in Raqqa. The latter has been operating since last year in a city that was once the capital of the Islamic State in Syria.

“Unlike the universities of Kobani and Rojava, in Raqqa they study in Arabic because the majority of citizens there are Arabs,” says Mistefa, who is today co-responsible for coordinating between the three institutions.

Mustefa has been closely linked to the institution since its inception. She helped to found the first Kurdish university in Syria in her native district of Afrin in 2015. That pioneering initiative had to close its doors in 2018: territorially disconnected from the rest of the Kurdish Syrian territories, Afrin was taken over by Ankara-backed Islamist militias. It remains under occupation to this day.

“Many people ask us why we open schools and universities in the middle of the war. I always tell them that ours is a culture of building, and not that of destroying our neighbours and their allies”, says the Kurdish woman. 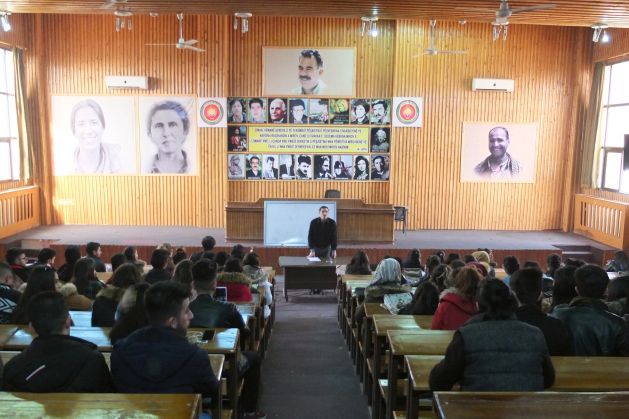 Ideologues and martyrs of the Kurdish cause are also present on the walls of the University of Rojava. Credit: Karlos Zurutuza/IPS

The Kurds call “Rojava” (“west”) their native land in northeast Syria. In the wake of the so-called “Arab spring” uprisings across the Middle East and North Africa in 2011, Kurds opted for what was then known as the “third way”: neither with the government nor with the opposition.

Twelve years on, the Kurdish minority in Syria coexists with Arabs and Syriacs in the so-called Autonomous Administration of North and East Syria (AANES). It’s in this corner of Syria, which shares borders with both Turkey and Iraq, where such a network of universities has been built. It now rivals the institutions of the Syrian Arab Republic government.

After the opening of the first Kurdish-language schools in the history of Syria, the University of Rojava is one more step forward in a revolution that has placed education among its main values.

It consists of nine faculties that offer free academic training in various Engineering branches, as well as Medicine, Law, Educational Sciences, Administration and Finance, Journalism and, of course, Kurdish Philology.

“I chose Philology because I love writing poems in Kurdish; I am very much into folklore, literature… everything that has to do with our culture,” Tolen Kenjo, a second-year student from the neighbouring city of Hasaka tells IPS.

The 19-year old still remembers being punished at school whenever she would utter a word in her mother tongue. For more than four decades, the ban on the Kurdish language in Syria was just another chapter within an ambitious assimilation plan that also included the displacement of the country’s Kurdish population and even the deprivation of citizenship of tens of thousands of them. 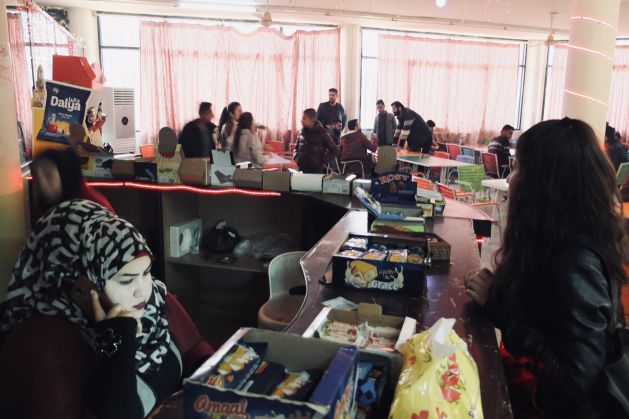 The cafeteria during the half-hour break. Credit: Karlos Zurutuza/IPS

Today, the university’s walls are covered with posters: climate maps, the photosynthesis cycle, quotes from the Russian classics. For the first time in Syria, all are in the Kurdish language. The corridors get crammed with students during the breaks between classes, often amid the laughter that comes from a group of students playing volleyball in the courtyard.

In the Department of English Language and Translation, we find Jihan Ayo, a Kurdish woman who has been teaching here for more than three years. Ayo is one of the more than 200,000 displaced (UN figures) who arrived from Serekaniye in 2019, when the Kurdish district was invaded by Islamist militias under Ankara´s wing.

“Turkey’s attacks or those by cells of the Islamic State are still a common currency here,” Ayo tells IPS. When it comes to lessons, she points to a “titanic task.”

Work is still underway to translate teaching materials into Kurdish — to train not only students but also those who will become their teachers. Among other things, Ayo remembers those “very tough” 18 months during which the pandemic forced lessons to be suspended.

“We tried to cope with things online; we got help from volunteer teachers from practically all over the world, but, of course, not everyone here has the means to connect to the Internet…”

She also faces a fight to gain the trust of many local citizens, towards an educational network that has no recognition outside this corner of Syria. Although the Kurdish administration administers the region, the “official” schools -those ran by Damascus- continue to function and, of course, they stick to the pre-war curriculum. 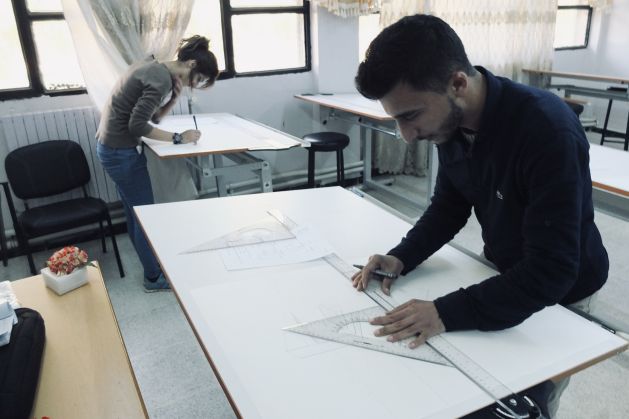 Teaching in the middle of a war has been one of the challenges faced by the Syrian Kurds. Credit: Karlos Zurutuza/IPS

In a comprehensive report published in September 2022 on the university system in northeast Syria, Rojava researchers Information Center (an independent press organization) stress the importance of international recognition that can make the institution more attractive to students.

“While the quality of the education received at these universities in itself is comparable to other institutions’ in the region, the lack of recognition abroad may make it impossible for the students to continue their studies outside of Syria, find employment abroad, or even have their technical knowledge recognized by companies and institutions not tied to the AANES,” the report warns.

It´s just a ten-minute walk from the campus to the headquarters of the Democratic Union Party (PYD), the dominant political party among Kurds in Syria. From his office, PYD co-chairman Salih Muslim wanted to highlight the role of universities as “providers of necessary cadres to build and develop the places they belong to and come from.”

“Our universities are ready to cooperate and exchange experiences with all the universities and international institutions to gain more experience and they are welcome to do so,” Muslim told IPS.

Despite the lack of international recognition, academic life goes on in this corner of Syria. Noreldin Hassan arrived from Afrin after the 2018 invasion and today is about to fulfil his dream of graduating in Journalism. The 27-year-old tells IPS that his university is “working in the right direction” to achieve international recognition. However, he has chosen not to wait for a degree to begin his career, and he has been working as a reporter for eight years already .

“Getting a diploma is important, but, at the end of the day, journalists learn by sheer practice while looking for stories and covering those,” stresses the young man.

The last story he covered? One about those women forced to marry mercenaries on a Turkish payroll. The story he´d like to cover the most? No surprises here:

“The day when the Kurds of Afrin can finally go back home.”