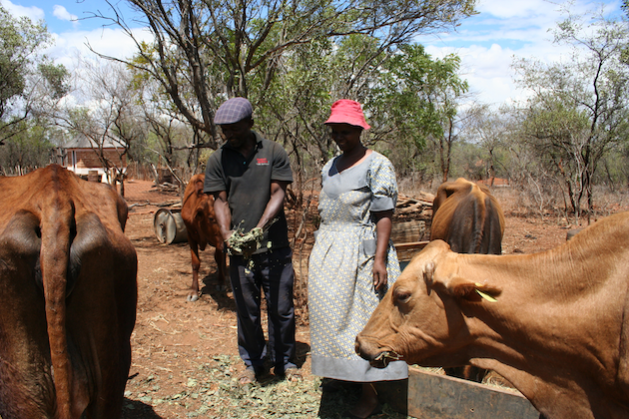 Cattle are important for economic growth and in supporting livelihoods across Africa. Livestock farmers in Nkayi, Zimbabwe, tending to their cattle. Credit: Busani Bafana/IPS

Growing negative narratives about cattle’s contribution to climate change are shrinking the growth of the strategic livestock sector on which the livelihoods of more than 1.3 billion people in the world depend.

In Africa, livestock farming is life, providing food, nutrition, jobs, draught power, income generation, and a source of cultural significance. But the benefits of keeping cattle, goats, sheep, and pigs are lost when it comes to the impact of livestock on the environment are mentioned.

As a result,  livestock farmers are suffering from the low investment in the livestock sector, which has the potential to drive economic growth, address poverty and achieve many of the Sustainable Development Goals (SDGs).

Researchers, farmers, and entrepreneurs, lamenting the negative perception about livestock in contributing to climate change, are calling for a balanced discussion to highlight livestock production, not as a problem but as a solution in tackling climate change, especially in developing countries.

Ian Wright, Deputy Director General at the International Livestock Research Institute (ILRI) in Nairobi, Kenya, admits that livestock production is today topical for its negative impact on the environment, an area where it can provide a solution. There are suggestions that milk, meat, and eggs are becoming foods to avoid, yet livestock is one of the fastest-growing economic sectors in Africa, he said.

“Livestock and livestock systems are very different in different regions of the world, and the cultural significance and economic importance varies but the contribution of livestock to food and nutrition security in Africa is absolutely critical,” Wright told IPS in an interview. He added that the majority of people in Africa tend not to eat adequate sources of protein and micronutrients, in contrast to the situation in the Global North, where people will benefit from eating less meat and animal-sourced foods.

We can ‘meat’ in the middle

“The livestock sector must address these shortcomings as there are opportunities to make livestock part of the resilience and adaptation efforts; for example,  climate variability makes cropping too risky, but livestock can still be raised producing food from land that cannot produce crops.”

A growing population and rapid urbanization are also driving an appetite for animal-sourced foods from eggs, milk, beef, and pork, which are also some of the best and often affordable sources of protein. Livestock provides energy-dense and micronutrient-rich foods, which are important for pregnant women and particularly babies in the first 1 000 days of life.

Scientists are clear about livestock’s huge hoof print.  Assessments by the FAO show that total emissions from global livestock represent 14.5 percent of all human-induced GHG emissions. Cattle, in particular, are responsible for the most emissions, at about 65 percent of the livestock sector’s emissions, largely of dangerous methane gas. As a result, there is a growing movement to stop eating meat and instead tuck it into plant-based diets to promote health and save the environment.

However, Africa is one of the regions in the world where malnutrition is rising. More people are going hungry, and even more, have no access to nutritious food. Livestock is a solution.

The World Bank notes that Africa is losing between 3 and 16 percent of its GDP annually because of childhood stunting, and animal-sourced foods can contribute to reducing that problem, says Adegbola Adesogen, Director of the Food Systems Institute and the Feed the Future Innovation Lab for Livestock Systems at the University of Florida.

The livestock sector attracts little investment compared to other agriculture sectors but contributes up to 40 percent of the agriculture GDP in Africa. Of the $129 billion Official Development Assistance in 2020, only 4,3 of that was funneled into agriculture, and livestock received just 1.3 percent, Wright noted.

Smallholder farmer, Emma Naluyima from Uganda, who has integrated crop growing and livestock in growing a thriving farm enterprise on an acre of land, says supportive policies are critical in promoting the development of the livestock and the livelihoods of livestock farmers.

Naluyima, speaking during a panel discussion at a session hosted by the ILRI during the 2022 Alliance for a Green Revolution Forum in Rwanda, highlighted that livestock is productive and profitable when farmers are supported to do it correctly.  Naluyima’s one-acre integrated farm, based on the recycling of farm resources to provide natural fertilizers and pesticides as well as biogas, generates $100,000 in income annually.

While many countries in Africa have failed to allocate at least 10 percent of their public expenditure on agriculture in line with the Malabo Declaration on Agriculture commitments, the livestock sector was barely getting more than 3 percent of the agriculture budget, yet it has the potential to transform the continent’s food systems.

Wright says livestock can solve multiple food system challenges in Africa as it is a significant contributor to the Agenda 2030 and the Sustainable Development Goals. For a continent that continues to bear the double burden of food and nutritional insecurity, livestock-sourced foods can reduce malnutrition for the most vulnerable communities, he said.

“The livestock sector must address these shortcomings as there are opportunities to make livestock part of the resilience and adaptation efforts; for example, climate variability makes cropping too risky, but livestock can still be raised producing food from land that cannot produce crops,” said Wright.

“With the right policies and a balanced narrative about the livestock sector, livestock can attract investment and boost economic growth in Africa,” said Wright.