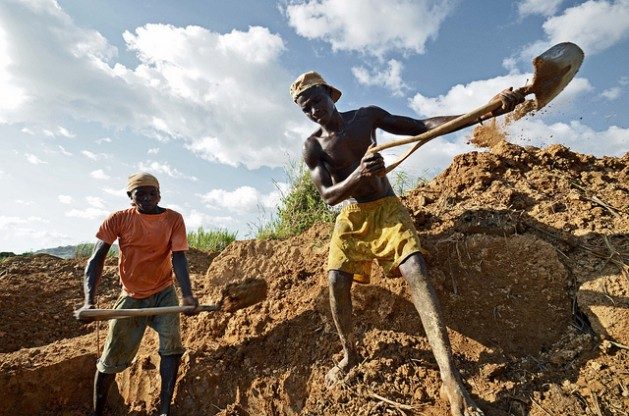 MADRID, Oct 10 2022 (IPS) - Africa. The birthplace of “Homo Sapiens.” The land of plenty. The origin of farming. The richest region in terms of natural resources. And human capital. Home to over 1.3 billion humans, continues to be looted.

With 500 million plus people living in extreme poverty, Africa has also been transformed in a sort of grave for half of the world’s victims of terror. The continent is also the land with the highest suicide rate on Earth. Why?

The illegal exploitation of precious metals and minerals such as gold, silver and diamonds, are fuelling the extremists with significant sources of income, and benefiting the groups that control extraction, and trafficking routes - The vast Sahel region in particular has become “home to some of the most active and deadly terrorist groups”, says the Head of the UN Office on Drugs and Crime (UNODC)

“The evidence is there that the illegal exploitation of precious metals and minerals such as gold, silver and diamonds, are fuelling the extremists with significant sources of income, and benefiting the groups that control extraction, and trafficking routes.”

This is what the Head of the UN Office on Drugs and Crime (UNODC) on 6 October 2002 stated, informing that the vast Sahel region in particular has become “home to some of the most active and deadly terrorist groups.”

See some of the major facts Ghada Waly submitted to the UN Security Council:

The Ambassadors sitting in the UN Security Council heard these words. Five of them represent the world’s biggest arms producers –those used by terrorist groups– and their markets are the top beneficiaries of the business of exploiting precious minerals.

But there is much more to tell. The very same day, 6 October, the World Health Organization (WHO) launching another horrifying data: Africa has the highest suicide rate in the world.

Ahead of World Mental Health Day on 10 October, Dr. Matshidiso Moeti, WHO’s Regional Director for Africa, called for “significant investment…to tackle Africa’s growing burden of chronic diseases and non-infectious conditions – such as mental disorders – that can contribute to suicide”.

A couple of specific facts presented by the world specialised body:

Mental health deserves less than half a dollar

Despite the urgency of the problem, African governments allocate less than 50 US cents per person to treat mental health problems, says WHO. This is five times more than in 2017, but it is still well below the recommended 2 US dollars per person for low-income countries.

Additionally, mental health care is generally not included in national health insurance schemes, WHO said, noting that in Africa, there is only one psychiatrist for every 500,000 inhabitants.

This is 100 times below the WHO recommendation.

Additionally, mental health workers mostly work in urban areas, often leaving rural communities without any support. “Mental health is integral to wholesome health and well-being yet far too many people in our region who need help for mental health conditions do not receive it.”

The robbery of Africa is not new. European merchants in the early years of 16th century initiated the known as the Transatlantic slave trade. Tens of thousands of Africans were hunted mostly in West Africa, loaded in the holds of ships, chained, minimally fed to keep them alive, surrounded by rats, and shipped for European colonies in the Americas.

Then, in the 1880s, in what became known as the “Scramble for Africa,” European countries raced to occupy the continent, seeking economic, commercial, and strategic profits.

But such independence did not last long.

In fact, Western-based private corporations have soon replaced the European-State colonisation, extracting oil, gold, diamonds and all sorts of precious metals and mineral resources, including highly demanded coltan and lithium, just to mention some.

The world scientific community has repeatedly informed that while Africa produces between 2% and 3% of all gas emissions, the continent carries the burden of over 80% of all climate catastrophes, majorly generated by the five permanent members of the UN Security Council.

As a consequence of its impoverishment and the unbearable load of external debts, the abuses of world’s trade, the continued exploitation, the induced corruption, and the severe droughts and floods, Africa is now home to 1 in 2 humans living in extreme poverty, and hunger.

No wonder then that thousands of Africans continue to attempt to escape poverty and hunger, fleeing to Europe in search of jobs that allows them and their families to survive.

Hundreds of them have drowned in the sea, and those who have managed to survive continue to be prey to human smugglers and traffickers who force them into ‘modern’ slavery, sexual exploitation, trade in vital organs, etcetera.

And anyway, those who finally reach European lands are now being pushed back, shipped to other countries in exchange for money, and swept away to States with high records of human rights abuses.

The looting of a whole continues unabated.