BRUSSELS (IDN), Oct 6 2022 (IPS) - “If all I knew about Africa were from popular images, I too would think that Africa was a place of beautiful landscapes, beautiful animals and incomprehensible people, fighting senseless wars, dying of poverty and AIDS, unable to speak for themselves”. This quote from the Nigerian writer Chimamanda Ngozi Adichie is in the introduction to Dipo Faloyin’s book ‘Africa is not a country‘. It summarizes Faloyin’s book nicely. 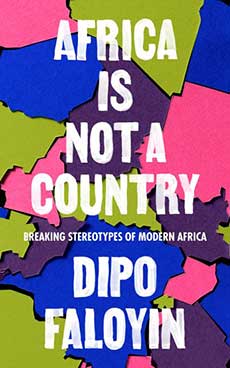 Born in Chicago, raised in Lagos and currently based in London, Nigerian Dipo Faloyin is a senior editor at VICE, the online news service founded in New York in December 2013, which distributes documentaries daily through its website and YouTube channel. VICE promotes itself as “the definitive guide to illuminating information” about “under-reported stories”.

Africa is bigger than Canada, the US and China combined

Africa is big, about 30 million square kilometers, just under twice the size of Russia or bigger than Canada, the United States and China combined! This is not clearly visible on most world maps due to the common use of the Mercator projection. It makes countries near the poles appear larger and those at the equator smaller. However, Africa is a rich and diverse place. It includes more than 1,500 languages and 16 percent of the world’s population.

“Always use the word ‘Africa’ or ‘black’ or ‘safari’ in your title,” Kenyan writer Binyavanga Wainaina suggested in a 2005 satirical essay. He scoffed at the repeated stereotypes in international coverage of Africa.

Faloyin also argues that there is rarely a balanced or nuanced view of Africa because clichés about poverty, famine and disasters dominate the reporting and Hollywood romance about Africa.

These writers criticize international coverage of Africa for its emphasis on the suffering of powerless victims. This is spiced up with the occasional celebrity visit or a beautiful shot of wildlife. In doing so, they point to the absurdity of reporting that attempts to capture a vast continent of more than 50 countries in broad generalizations.

Above all, they disdain what is often called Afro-pessimism. This is the tendency to depoliticize stories in sub-Saharan Africa and reduce them to hopeless humanitarian crises or harrowing images.

While the wars, famines, plagues and epidemics were the only ‘news’ from Africa for years, a ‘new’ story has been added for some time. In May 2000 there was the famous front page of The Economist portraying Africa as the hopeless continent; in 2011 this image was replaced by a cover full of clear skies and with the headline ‘Africa Rising‘.

Time magazine followed suit with a cover of the same title. Suddenly the continent is buzzing with mobile phones and energetic companies. Michela Wrong called this the new mandatory slogan in the New York Times of March 20, 2015, now that “it is fashionable these days to be upbeat about Africa”.

“This book is a portrait of modern Africa that pushes back against harmful stereotypes to tell a more comprehensive story — based on all the humanity that has been brushed aside to accommodate a single vision of blood, strife and majestic shots of rolling savannahs and large yellow sunsets. . It will unspool the inaccurate story of a continent dragging this bludgeoned narrative towards reality,” Faloyin states explicitly on page 7.

The danger of a neoliberal agenda

The problem is that all reductionist stereotypes are incomplete and inaccurate. And in particular, the latest characterization of Africa as a place full of entrepreneurs, complete with its own ‘silicon savannah‘, has other problems.

In a part of the world that continues to face staggering levels of inequality, there is a danger that Africa will get too close to a neoliberal agenda and goals. Whatever successes the new companies may achieve, there is not much evidence of a trickle-down effect for those at the bottom of society.

Of course, there are success stories in many places that demonstrate the capabilities of developing African economies. Some countries in Africa, such as Benin, Egypt, Ethiopia, Mozambique, Ivory Coast, Tanzania or Rwanda are currently among the fastest growing economies in the world. But the ‘Africa Rising’ stories ignore the plight of those who are still far behind in societies that, outside the family or immediate community, don’t offer much of a social safety net, which in most Western societies (to some extent) is visible.

We can therefore sympathize with the plight of Africans who board rickety boats and try to build a new life abroad. Yet it is well known that the so-called economic migrants seeking a better future across the Mediterranean are not the ones at the bottom, who could never afford or even consider such a journey.

Faloyin has a smooth pen and colors his book with several well-chosen examples. He examines each country’s colonial heritage and explores a variety of topics, from describing urban life in Lagos and the lively West African rivalry over who makes the best Jollov rice, to the still lingering case of stolen art treasures in Western museums — “90 percent of Africa’s material cultural legacy is being kept outside of the continent” (p. 258) — to the story of democracy in seven dictatorships and the dangers of stereotypes in popular culture.

Africa is home to 54 countries, including island nations along the coast of the continent. These countries are home to diverse groups of people who speak different languages and practice a wide variety of customs.

Take Nigeria, the most populous country in Africa. More than 250 different ethnic groups live among the population of more than 200 million inhabitants. While English is the official language of the former British colony, the many languages of ethnic groups indigenous to the West African nation, such as Yoruba, Hausa, and Igbo, are also spoken. In addition, Nigerians practice Christianity, Islam and indigenous religions.

So much for the myth that all Africans are the same. The most populous nation on the continent certainly proves otherwise.

Or take Egypt. In particular, the country borders Libya to the west, Sudan to the south, the Mediterranean Sea to the north, the Red Sea to the east and Israel and the Gaza Strip to the northeast. Despite its location, Egypt is often described not as an African nation, but as the Middle East – the region where Europe, Africa and Asia converge.

This omission stems mainly from the fact that Egypt’s population of more than 100 million is strongly Arab – with a small minority of Nubians in the south – a drastic difference from the population of Sub-Saharan Africa.

According to scientific research, the ancient Egyptians – known for their pyramids and advanced civilization – were biologically neither European nor Sub-Saharan African, but a genetically distinct group. These people are located on the African continent. Their existence also reveals the diversity of Africa.

Occasionally, the image of the “white savior” also sneaks into Faloyin’s story. Sometimes rightly so, as the West is presented as a ‘white savior’ during the colonization and partition of Africa on 15 November 1884 at the Berlin Conference in the absence of any African representation: “Only 30 per cent of all borders in the world are in Africa, yet nearly 60 per cent of all territorial disputes that have made it to the International Court of Justice come from the continent” (p. 46).

The more recent search in 2012 for Joseph Kony of the Lord’s Resistance Army is also discussed in detail. Faloyin sarcastically concludes: “The White Savior Industrial Complex is not about justice. It is about having a big emotional experience that validates privilege” (p. 79).

The continued affirmation of a paternalistic and ignorant perspective, be it the helpless savages or the noble poor, is fundamentally reprehensible and will not lead to satisfying contributions of any kind in the long run. All the more so since, as Howard French also argued, Africa has been the hub of the machine of modernity for Europe.

But Faloyin also falls short. “While Faloyin excels at articulating the complaint (about the white savior), he has little to offer as a remedy to a problem rooted in a centuries-old global power imbalance. Fairness dictates, too, a recognition that intellectual laziness is hardly the white man’s exclusive preserve,” adds Michela Wrong in The New York Times of August 31, 2022.

Our views on groups of people stem from socialization, including our parents, peers, national culture, subcultures, and especially the mass media. This is called implicit or unconscious bias. Everyone makes these generalizations, and they help and protect us in this complex world.

They are too simple and mainly based on group membership based on limited characteristics, such as age, a physical characteristic, gender, race or nationality. Generalizations can be helpful, but stereotypes are dangerous.

Based on oversimplified, fixed assumptions about groups of people, stereotypes are often ‘justified’ within social systems, to cover up deeper myths. Africa has been the target of an unfathomable amount of stereotyping, which has led to the widespread belief in much false information.

Many myths about Africa go back centuries. In modern times, new stereotypes about the continent have emerged. Sensation- and simplification-oriented news media continue to associate Africa with famine, war, poverty and political corruption.

This is not to say that such problems do not exist in Africa. Of course, they do. But even in prosperous countries, poverty, abuse of power and chronic diseases play a role in daily life. While the African continent faces enormous challenges, not every African is in need, nor is every African nation in crisis.