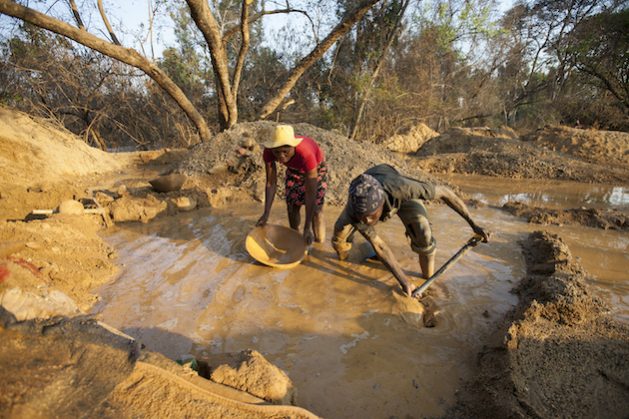 Artisanal miners are cutting down trees to process gold and climate change experts are concerned about the forests. Credit: Jeffrey Moyo/IPS

MAZOWE, Zimbabwe, Oct 29 2022 (IPS) - With homemade tents scattered about, hordes of artisanal gold miners throng parts of Mazowe village in Zimbabwe’s Mashonaland Central Province, where they have cut down thousands of trees to process gold ore.

Patrick Makwati (29), working alongside his 23-year-old cousin, Sybeth Mwendauya, are some of the miners who mine without a permit that have descended on Mazowe village, cutting down trees for processing gold.

The two cousins said they are using the trees to process the gold that they mine as they claim that they could not afford coal which could have been an alternative for them.

Illegal gold miners, like Makwati and Mwendauya, claim to only use wood when processing gold.

Yet, while the cousins camp in the bushes of rural Mazowe and cook their meals, they have also switched to woodfire.

“We depend on the trees we cut because we can’t afford coal while we also don’t have access to electricity,” Makwati told IPS.

In Zimbabwe, a tonne of coal costs 30 US dollars before transport costs are factored in, which illegal gold miners like Makwati and Mwendauya cannot afford.

The two cousins, like many other illegal gold miners, solely depend on woodfire to heat up the gold ore.

In areas like Mazowe, forests have already fallen, thanks to the gold miners, and now the areas look like a mini deserts.

Forestry officials from the Zimbabwean government lament the constant loss of forests every year.

According to the Forestry Commission here, this country loses 262,000 hectares of trees every year for different reasons.

Illegal gold miners have been factored in as one of these.

Thirty percent of the forest is lost to illegal mining, says environmental activist, Monalisa Mafambirei, based in the Zimbabwean capital Harare.

“You speak of Mazowe as a case study, but, of course, this is not the only area losing trees to illegal gold miners. In fact, this problem facing our forests is widespread as gold miners are all over the country where gold is mined, and trees have continued to be the casualties as gold miners cut them down rather carelessly either for use when processing the gold ore or as they clear the land upon which they mine,” a government climate change officer here who said she was not authorized to give media interviews, told IPS.

Even environmental campaigners in this southern African country, like Gibson Mawere, heaped the blame on the artisanal gold miners for fanning deforestation in the country.

“Illegal gold miners are unregulated, and they cut down trees, clearing areas on which they mine for gold, and also they use firewood to then process the gold ore because you should remember that these miners have no access to electricity nor coal to use in place of firewood,” Mawere told IPS.

As the blame game plays out, it may be years before a solution is found to stem the deforestation fanned by illegal gold miners in Zimbabwe.

For the artisanal gold miners, the answer lies in formal employment.

Without that, they say, forests may have to continue to suffer.

Gold miners like Makwati and his cousin place the blame on the country’s struggling economy.

“If we don’t cut the trees, we will have no money at the end of the day. We use fire from the trees we cut to process the gold ore before we sell pure gold. With formal jobs, we wouldn’t be harming the environment nor destroying trees,” Makwati told IPS.