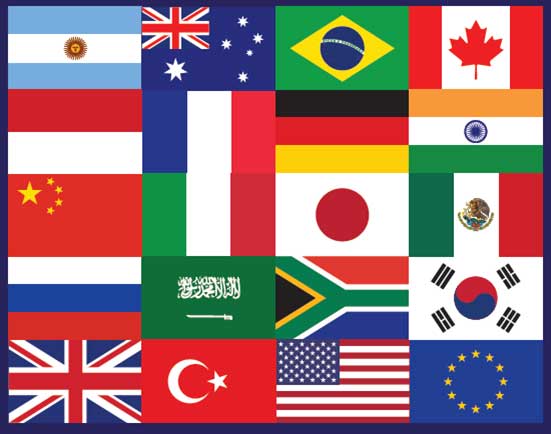 The G20 membership comprises a mix of the world’s largest advanced and emerging economies, representing about two-thirds of the world’s population, 85 per cent of global gross domestic product and over 75 per cent of global trade. The members of the G20 are Argentina, Australia, Brazil, Canada, China, France, Germany, India, Indonesia, Italy, Japan, Republic of Korea, Mexico, Russia, Saudi Arabia, South Africa, Turkey, the United Kingdom, the United States and the European Union.

All this weighted heavily on the IMF outlook, pointing to a bleak future ahead.

This is particularly bad news for developing countries. Using IMF data, our research showed that recovery spending in the last two years of the pandemic in the Global South was only 2.4% of GDP on average, a quarter of the level recommended by the UN and a fraction of what rich countries spent.

Meanwhile, only 38% of the total went to social protection, with corporate loans and tax breaks getting the lion’s share.

Things will get worse unless there is a fundamental policy change. This year recovery funds have dried up and, as most countries are heavily indebted, the IMF projects large expenditure cuts.

In 2023, at least 94 developing countries are expected to cut public spending in terms of GDP. Our report estimates that 85% of the world’s population living in 143 countries will live in the grip of austerity measures by 2023, and the trend is likely to continue for years.

Unless these policies are reversed, people in developing countries will suffer as a result cuts to social protection and public services at a time they are most needed, with 3.3 billion people (or nearly half of mankind) expected to be living below the poverty line of US $5.50/day by the end of 2022.

This crisis will affect especially women who received half less COVID-19 recovery funds than their male counterparts.

But the impact goes far beyond women. Elderly pensioners and persons with disabilities will receive lower pension benefits. Workers around the world will see less job security, poorer pay and working conditions as regulations are dismantled.

A recent study on inequality found that the vast majority of countries were making labor markets more flexible to help big corporations. As inflation keeps rising, worsened by higher consumption taxes, families will be much affected while any support they receive will be less due to austerity cuts.

South Africa reflects the crisis of countries falling into the austerity trap. The government provided Social Relief of Distress (SRD) grants of R350 (US$24 in 2021) per month that were instituted at the start of the pandemic, supporting for the first-time low-income individuals who are of working age.

These grants have been extended several times, providing a lifeline for those worst hit by the pandemic.

However, despite the cost-of-living crisis, the government -advised by the IMF- is now considering reducing social expenditures and helping only the most vulnerable, leaving many low-income households without any support. Other austerity measures being discussed include cuts to the salaries of civil servants, and labor flexibilization reforms.

Instead of these austerity cuts, the South African government and the IMF should focus on raising additional revenues to fund social protection and public services, making sure everyone pays taxes, reducing corporate tax loopholes and exemptions, taxing excess profits and wealthy individuals.

Similarly, Ecuador has been shaken by social unrest because of austerity reforms. In 2019, after large riots, the government of Lenin Moreno flew from the capital and had to stop a loan with the IMF that had proposed cuts to subsidies and other austerity reforms.

In 2021, the same austerity policies were proposed again by the IMF, such as cuts to subsidies and public services, reducing social protection and labor regulations.

In 2022, farmers, indigenous men and women, marched again to the capital with pitchforks to join students and workers protesting austerity policies, forcing President Lasso to back down and agree to grant subsidies and other demands.

These are only two examples reflecting the austerity storm gathering around the world. This is extremely unfair and will generate unnecessary social hardship, as populations are struggling with a severe cost-of-living crisis, especially at a time when many countries are losing significant amounts of revenue to tax abuses, illicit financial flows and tax exemptions to large corporates that are wholly unnecessary.

Austerity cuts are not inevitable, there are alternatives even in the poorest countries. Instead of austerity cuts, governments can increase progressive tax revenues, restructure and eliminate debt, eradicate illicit financial flows, and re-allocate public expenditures, among other options.

Policy makers must act on this. All the human suffering and social unrest that austerity inflicts is unnecessary.

Austerity campaign calls on citizens and organizations from all around the world to fight back against the wave of austerity sweeping the globe, supercharging inequality and compounding the effects of the cost-of-living crisis.

Our decision-makers need to wake up and change course. There is no time to lose.