Farmers in Bhutan Turn To Asparagus and Strawberries To Boost Incomes 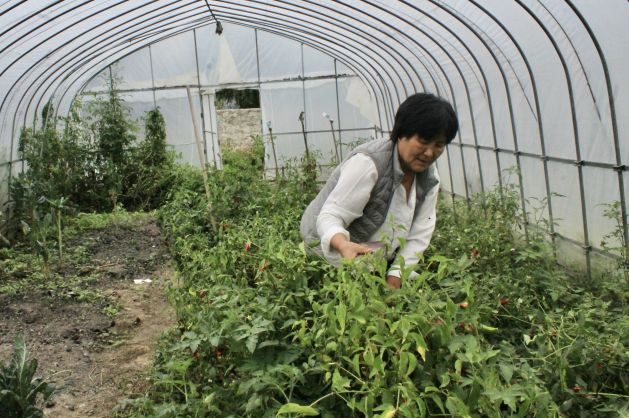 Om, a homestay owner in Paro, is hoping to value add after growing strawberries in her small greenhouse. Credit: Chhimi Dema/IPS

PARO, Bhutan, Oct 14 2022 (IPS) - Zam, 57, sits at her kitchen table looking out the window at her orchard of four dozen apple trees. In the past eight years she has sold only two crates (100 kilogrammes) of the fruit because of poor harvests. She turned her attention to vegetables instead but the production was low because of a water shortage.

She is among the country’s farmers who have registered with the Ministry of Agriculture and Forests (MoAF) to grow a selection of crops identified for their potential to improve nutrition, withstand impacts of climate change and improve export earnings: strawberry, quinoa, black pepper and asparagus

Zam (who uses one name only) lives in the village of Jukha in Paro district, near Bhutan’s international airport. She is now pinning her hopes on growing strawberries. “It’s my only hope for better earnings, although it is a niche product,” she tells IPS.

The farmer is optimistic after seeing her neighbours grow the fruit, and increase their income. “I am inspired by that, and hope that I earn better from strawberries. I would like to save money for emergencies and spend on maintenance of my house.”

The two-storey, mud home is perched alone atop a hill, looking onto a small valley bisected by a river. Other similar houses dot the landscape. But part of the roof of Zam’s house was blown away in high winds last winter.

She is among the country’s farmers who have registered with the Ministry of Agriculture and Forests (MoAF) to grow a selection of crops identified for their potential to improve nutrition, withstand impacts of climate change and improve export earnings: strawberry, quinoa, black pepper and asparagus.

The agriculture ministry will support these farmers through the Hand-in-Hand Initiative (HiH) of the United Nations Food and Agriculture Organization (FAO).

Hand-in-Hand (HiH) is an evidence-based, country-owned and led initiative to accelerate agricultural transformation, with the goal of eradicating poverty, ending hunger and malnutrition, and reducing inequalities. The initiative was supporting 52 countries in Africa, Asia, Europe, Latin America, and the Middle East as of May 2022. 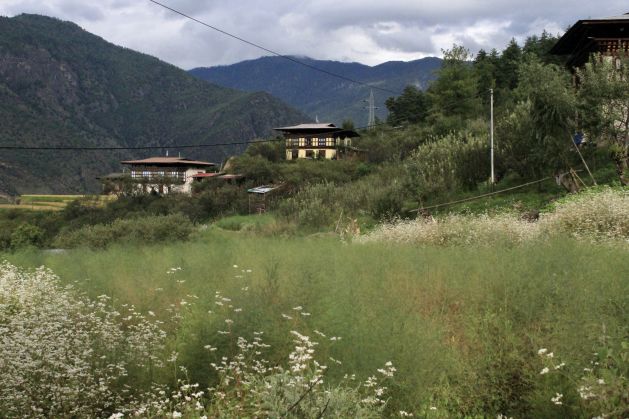 Farmers in Paro district are shifting their cash crop from apples to asparagus due to high earnings from asparagus. Credit: Chhimi Dema/IPS

The value addition of strawberries is another opportunity that some farmers are waiting to explore. According to the finance ministry, a total of 2,477 kg of strawberries in preserved, fresh or canned form, were imported from 2019 to 2021. No records of exports were noted in those years.

Thinley Yangzom and her family run a homestay on their farm in Paro, just west of the capital Thimphu. Established in 2002, it was among the first homestays in Bhutan and grows all the food needed for the family and their guests.

The 37-year-old says that she is aiming to make strawberry jams, juice and smoothies for guests, and to sell any surplus in the market. “Growing strawberries on our farm will save us the cost of buying imported food. We hope to be able to export after some years,” adds Yangzom. 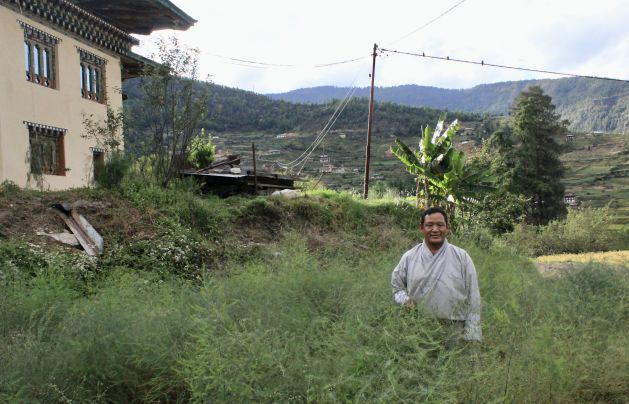 Kinley Tshering grows asparagus on 0.4 hectares of land along with paddy and apples. Credit: Chhimi Dema/IPS

Some farmers are already successfully growing the HiH-identified crops.

Kinley Tshering has been raising asparagus for more than one decade. Nestled between two ridges and among a vast paddy field, he has cultivated an acre of asparagus. “I was growing potatoes before but what I earn from asparagus farming is more profitable,” says Tshering, 51, who supplies the vegetable to hotels and restaurants in the district.

The farmer earns US$2,500 to $3,000 a year from selling the crop. “My hard work on growing asparagus is rewarded with the earnings,” he says.

Many farmers throughout the country were hard hit by the Covid-19 pandemic. The shock became a lesson for them to diversify their sources of income.

Tenzin Choden, 27, from Jangsa-Jooka in Paro, was supporting her family by rearing mules to carry the belongings of tourists trekking from her village. But in the past two years her income dropped 60 to 70 percent, leaving them with barely $200 a month.

In the kitchen garden at the back of her two-storey house is a small greenhouse where Choden grows chillies, but with little demand she sells only small amounts.

The farmer explains that Bhutan’s high altitude in the Himalayas does not allow the family to successfully grow other vegetables and that human-wildlife conflict is a major threat to their crops and livestock. Wild boars dig up their potatoes and bears break the apple trees.

But having heard about asparagus, Choden borrowed a few seedlings from a neighbour and they grew well, in part because wild animals ignored the crop. “The trial was a success and this encouraged me to seek further support from the ministry,” she says. “We are hoping that asparagus will improve our earnings.” 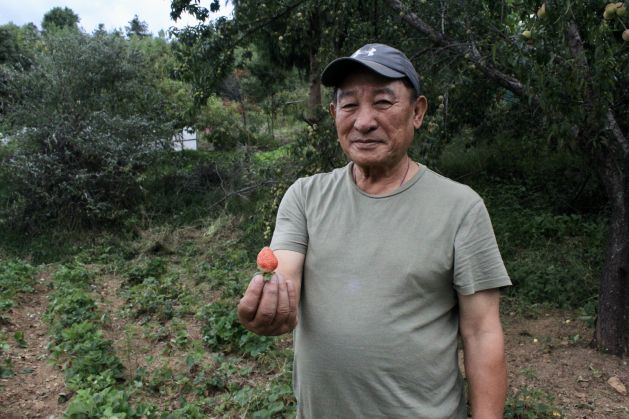 Jambay Dorji grows strawberries in his farm at Paro. With the Hand In Hand Initiative, he hopes to grow on a commercial scale. Credit: Chhimi Dema/IPS

There is some concern that if farmers succeed in growing the HiH crops, they will lack access to a large enough market. According to Bhutan Alpine Seeds’ chief executive officer, Jambay Dorji, himself a farmer, while the local market for vegetables such as asparagus is growing, “if we are going on a commercial scale then we will need a market to countries such as Thailand, India and others.”

“If the export route is fixed, then production within the country isn’t an issue,” adds Dorji. “People will make the effort to grow the vegetable because they can earn well from it.”