Venezuelan migrants stranded in Guatemala after their journey to Mexico was cut short by new restrictions issued by the United States. Most of them, unable to afford to return to their home country, await possible humanitarian return flights. CREDIT: IMG

CARACAS, Oct 28 2022 (IPS) - Thousands of Venezuelans who have crossed the treacherous Darien jungle between Colombia and Panama, or who have made the perilous journey through Central America and Mexico to reach the United States, have found themselves stranded in countries that do not want them, unable to continue their journey or to afford to return to their country.

Unexpectedly, on Oct. 12, the U.S. government announced that it would no longer accept undocumented Venezuelans who crossed its southern border, would deport them to Mexico and, in exchange, would offer up to 24,000 annual quotas, for two years, for Venezuelan immigrants to enter the country by air and under a new set of requirements.

“We were already in the United States when President Joe Biden gave the order, but they put us in a van and sent us back to Mexico. It’s not fair, on the 12th we had already crossed into the country,” a young man who identified himself as Antonio, among the first to be sent back to the border city of Tijuana, told reporters in tears.

Raul was in a group that took a week to cross the jungle and rivers in the Darien Gap, bushwhacking in the rain and through the mud, suffering from hunger, thirst, and the threat of vermin and assailants. When he arrived at the indigenous village of Lajas Blancas in eastern Panama, he heard about the new U.S. regulation that rendered his dangerous journey useless.

There he told Venezuelan opposition politician Tomás Guanipa, who visited the village in October, that “the journey is too hard, I saw people die, someone I could not save because a river swept him away, and it was not worth it. Now what I have to do is return, alive, to my country.”

In Panama, as in Costa Rica, Honduras, Guatemala and of course Mexico, there are now thousands of Venezuelans stranded, some still trying to reach and cross the U.S. border, others trying to get the funds they need to return home.

They fill the shelters that are already overburdened and with few resources to care for them. Sometimes they sleep on the streets, or are seen walking and begging for food or a little money, abruptly cut off from the dream of going to live and work legally in the United States.

That aim was fueled by the fact that the United States made the possibility of granting asylum to Venezuelans more flexible, as part of its opposition to the government of President Nicolás Maduro, which U.S. authorities consider illegitimate.

In addition, it established a protection status that temporarily allowed Venezuelans who reached the U.S. to stay and work.

Venezuela has been in the grip of an economic and political crisis over the last decade which, together with the impoverishment of the population, has produced the largest exodus in the history of the hemisphere: according to United Nations agencies, 7.1 million people have left the country – a quarter of the population. 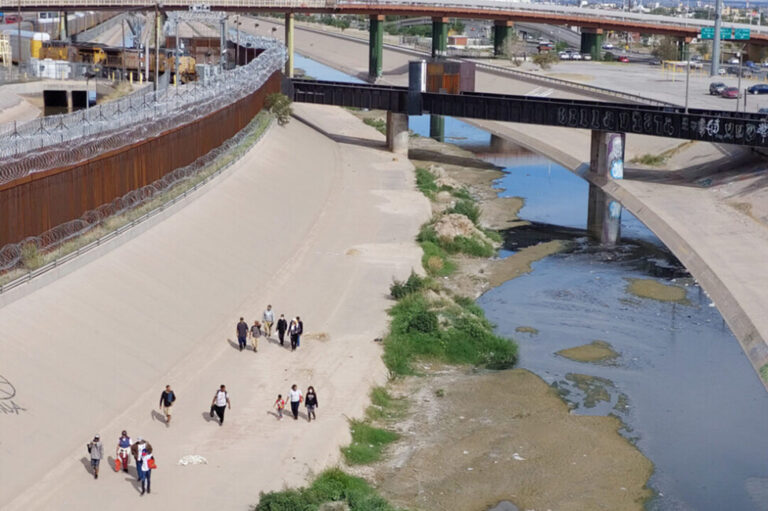 Venezuelan migrants walk in Mexico’s Ciudad Juarez between the Rio Grande and the wall that separates them from the United States, a border that they will no longer be able to cross on foot but only by air and with express permission from Washington. CREDIT: Rey R. Jáuregui/Pie de Página

Caught up in the elections

The flood of Venezuelan immigrants pouring across the southern border coincided with the tough campaign for the mid-term elections for the U.S. Congress in November, which could result in the control of both chambers by the Republican Party, strongly opposed to Democratic President Biden.

Republican governors and candidates from the south, strongly opposed to the government’s immigration policy and flexibility towards Venezuelans, decided to send busloads and even a plane full of Venezuelan asylum seekers to northern localities governed by Democratic authorities.

Thus, through misleading promises, hundreds of Venezuelans were bussed or flown and abandoned out in the open in New York, Washington, D.C. or Martha’s Vineyard, an island where millionaires spend their summers in the northeastern state of Massachusetts.

Human rights groups such as Amnesty International denounced the use of migrants as political spoils or as a weapon in the election campaign.

Against this backdrop, the Biden administration changed its policy towards Venezuelans, closing the country’s doors to them at the southern border, reactivating Title 42, a pandemic public health order that allows for the immediate expulsion of people for health reasons, and reached an agreement with Mexico to return migrants to that country.

The 24,000 annual quotas provided as a consolation, for migrants who have sponsors responsible for their support in the United States, plus requirements such as not attempting illegal border crossings or not having refugee status in another country, is almost equivalent to the monthly volume of Venezuelans who tried to enter the U.S. this year. 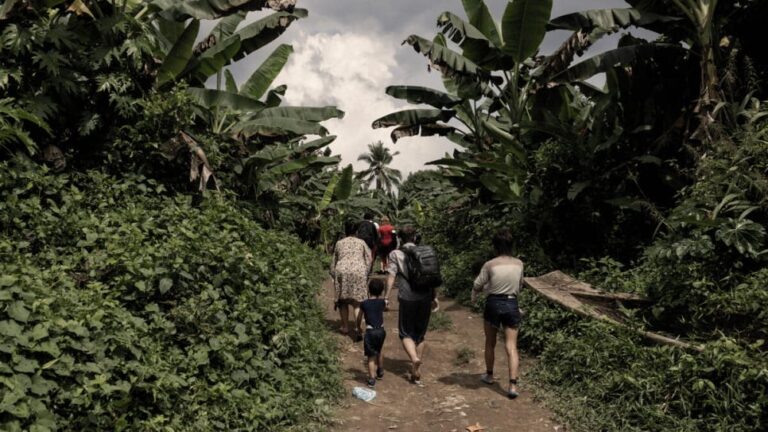 A family of migrants reaches the end of their journey through the dangerous Darien jungle, between Colombia and Panama, on their long journey to reach the border between Mexico and the United States. But a new U.S. immigration measure prohibits access to the U.S. for Venezuelans. CREDIT: Nicola Rosso/UNHCR

In the immediate future, those who were on their way will be left in limbo and will now have to return to their country, where many sold everything – from their clothes to their homes – to pay for their perilous journey.

Hundreds of Venezuelans have begun to arrive in Caracas on flights that they themselves have paid for from Panama, while in Mexico and other countries they await the possibility of free air travel, of a humanitarian nature, because thousands of migrants have been left destitute.

There are entire families who were already living as immigrants in other countries, such as Chile, Ecuador or Peru – where there are one million Venezuelans in Lima for example – but decided to leave due to a hostile environment or the difficulties in keeping jobs or finding decent housing, in a generalized climate of inflation in the region.

This is the case told to journalists by Héctor, who with his wife, mother-in-law and three children invested almost 10,000 dollars in tickets from Chile to the Colombian island of San Andrés, in the Caribbean, from there by boat to Nicaragua, and by land until they were taken by surprise by the U.S. government’s announcement, when they reached Guatemala.

Now, in contact with relatives in the United States, he is considering the possibility of returning to the country he left three years ago for Chile, or trying to continue on, while waiting for another option to enter the U.S.

The United States has reported that crossings or attempts to cross its border by undocumented migrants have decreased significantly since Oct. 12.

Among the justifications for its action at the time, Washington said it sought to combat human trafficking and other crimes associated with irregular migration, and to discourage dangerous border crossings in the Darien Gap.

According to Panamanian government data, between January and Oct. 15 of this year, 184,433 undocumented migrants reached Panama from the Darien jungle, 133,597 of whom were Venezuelans.

After his return to the country on Oct. 25, Guanipa the politician told IPS that at least 70 percent of the migrants who crossed the Darien Gap in the last 12 months were Venezuelans, along with other Latin Americans and people from the Caribbean or African nations.

And, after collecting personal accounts of the death-defying crossing, he urged his fellow Venezuelans to “for no reason risk their lives” on this inhospitable stretch that is the gateway from South America to Central America. 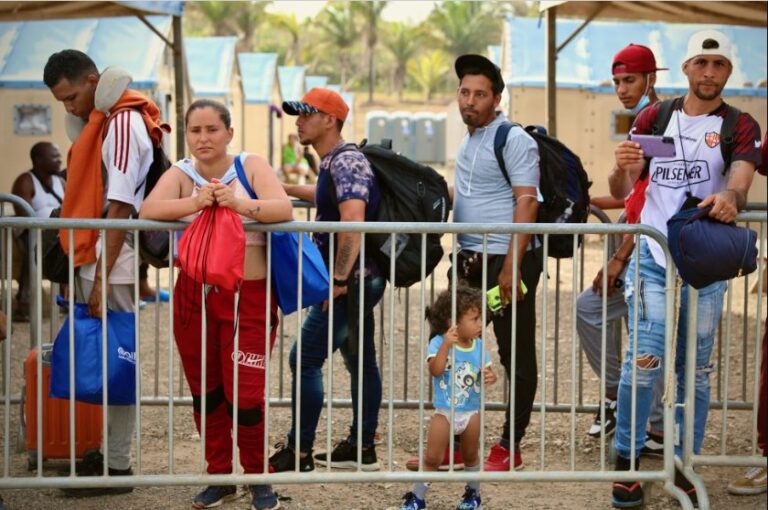 At every Latin American border, migration rules are becoming more restrictive and Venezuelans wait patiently to be allowed access, often to try to reach the farthest destinations in the hemisphere, such as Chile or the United States. CREDIT: Gema Cortés/IOM

The Venezuelan government blames the massive exodus and the dangers faced in the Darien Gap on its political and media confrontation with the United States, while claiming that the numbers of reported migrants are wildly inflated and that, on the contrary, more than 360,000 Venezuelans have returned to the country since 2018.

Heads of United Nations agencies and international humanitarian organizations believe that given the ongoing crisis in Venezuela, the flow of migrants will continue, and they therefore call on host countries to establish rules and mechanisms to facilitate the integration of the migrants into their communities.

While the United States has slammed the door shut on Venezuelan migrants, in countries such as Chile, Ecuador, Peru, Colombia, Mexico and some Central American nations, new rules are also being prepared to modify the policy of extending a helping hand to Venezuelans.

For example, Ecuador overhauled the Human Mobility Law to increase the grounds for deportation, such as “representing a threat to security”, and Colombia – which has received the largest number of Venezuelans – eliminated the office for the attention and socioeconomic integration of the migrant population.

Panama will require visas for those deported from Central America or Mexico, Peru is working to change regulations for the migrant population, and the government of Chile, which in the past has expelled hundreds of migrants on flights, announced that it will take measures to prevent unwanted immigration.

Of the 7.1 million Venezuelans registered as of September as migrants by U.N. agencies, the vast majority of them having left the country since 2013, almost six million were in neighboring Latin American and Caribbean countries.

Entire families have not only sought to reach the United States or Europe, but have traveled thousands of kilometers, in journeys they could never have dreamed of, with stretches by bus but often on foot, through clandestine jungle passes or cold mountains, to reach Brazil, Colombia, Ecuador, Peru, Argentina or Chile.

Others tried their luck in hostile neighboring Caribbean islands and dozens lost their lives when the overcrowded boats in which they were trying to reach safe shores were shipwrecked.

Faced with the explosive phenomenon, the United Nations Refugee Agency (UNHCR) and the International Organization for Migration (IOM) established a platform for programs to help migrants in the region and host communities, which is coordinated by a former Guatemalan vice-president, Eduardo Stein.

Of their budget for 2022, based on pledges from donor countries and institutions, for 1.7 billion dollars, they have only received 300 million dollars, in another sign that Venezuelan migrants have ceased to play a leading role on the international stage.