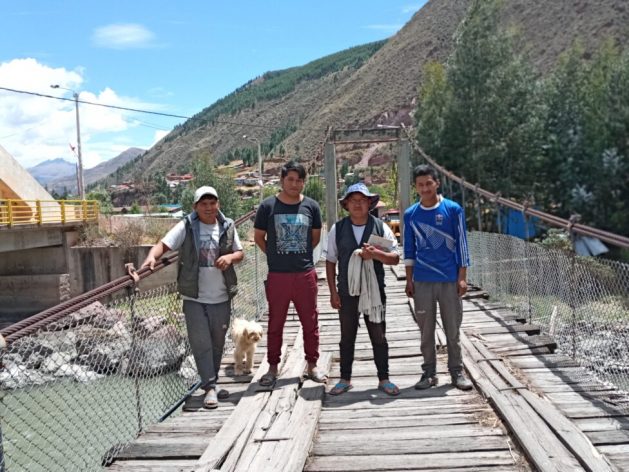 On the suspension bridge that crosses the Vilcanota River, in the village of Secsencalla, in the Andes highlands region of Cuzco, Peru, a group of men who have been taking steps towards a new form of masculinity without machismo pose for a photo. From left to right: Saul Huamán, Rolando Tito, Hilario Quispe and Brian Junior Quispe. CREDIT: Mariela Jara/IPS

CUZCO, Peru , Oct 6 2022 (IPS) - “My father was very ‘machista’, he used to beat my mother… It was a very sad life,” said Dionisio Ticuña, a resident of the rural community of Canincunca, on the outskirts of the town of Huaro, in the southern Peruvian highlands region of Cuzco more than 3,000 meters above sea level.

Today, at 66 years of age, he is happy that he managed to not copy the model of masculinity that his father showed him, in which being a man was demonstrated by exercising power and violence over women and children.

"I have been married to my wife Delia for 35 years, we have raised our children and I can say that you feel great peace when you learn to respect your partner and to show your innermost emotions.” -- Dionisio Ticuña

“Now I am an enemy of the ‘wife beaters’, I don’t hang out with the ones who were raised that way and I don’t pay attention to the taunts or ugly things they might say to me,” he said in an interview with IPS in his new adobe house, which he built in 2020 and where he lives with his wife and their youngest daughter, 20. Their three other children, two boys and a girl, have already become independent.

In this South American country of 33 million people, tolerance of violence, particularly gender-based violence, is high, and there is a strong division of roles within couples.

A nationwide survey on social relationships, conducted in 2019 by the governmental National Institute of Statistics and Informatics (INEI), showed that 52 percent of women believed they should first fulfill their role as mothers and wives before pursuing their dreams, 33 percent believed that if they were unfaithful they should be punished by their husband, and 27 percent said they deserved to be punished if they disrespected their husband.

The survey also found that a high proportion of Peruvians agreed with the physical punishment of children. Of those interviewed, 46 percent thought it was a parental right and 34 percent believed it helped discipline children so they would not become lazy.

Katherine Pozo, a Cuzco lawyer with the rural development program of the Flora Tristán Peruvian Women’s Center, told IPS that masculinity in Peru, particularly in rural areas, is still very machista or sexist.

“The ideas acquired in childhood and transmitted from generation to generation are that men have power over women, that women owe them obedience, and that women’s role is to take care of their men and take care of the home and the family. This thinking is an obstacle to the integral experience of their masculinities and to the recognition of women’s rights,” she said in an interview at her home in Cuzco, the regional capital. 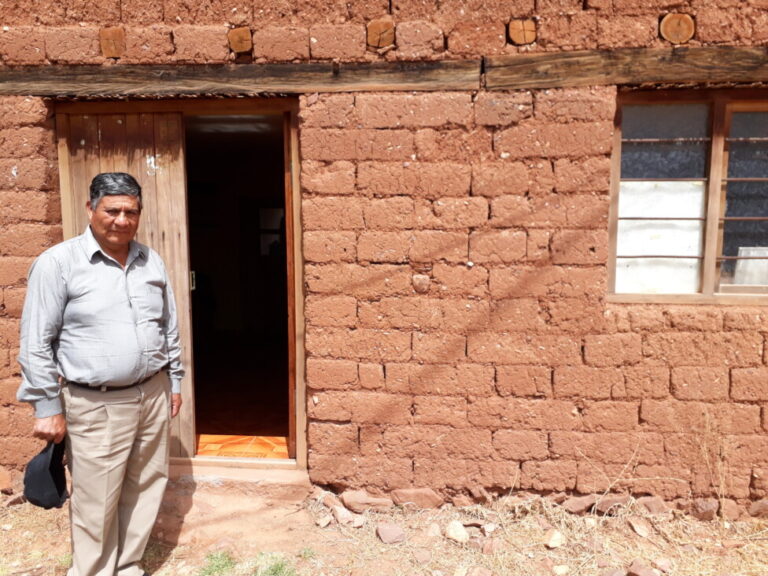 Dionisio Ticuña, a resident of the rural community of Canincunca, in the Andean region of Cuzco in southern Peru, stands in front of his new adobe house, built in 2020. At the age of 66, he has achieved the tranquility of a life without machismo, which he experienced as a child in his family. CREDIT: Mariela Jara/IPS

Based on that analysis the Center decided to involve men in the work they do in rural communities in Cuzco to help women exercise their rights and have greater autonomy in making decisions about their lives, promoting the approach to a new kind of masculinity among men.

In 2018 the Center launched this process, convinced that it was necessary to raise awareness among men about gender equality so that women’s efforts to break down discrimination could flourish. The project will continue until next year and is supported by two Spanish institutions: the Basque Agency for Development Cooperation and Muguen Gainetik.

IPS visited different Quechua indigenous villages in Cuzco´s Andes highlands to talk to farmers who are working to shed gender prejudices and beliefs that, they acknowledge, have brought them unhappiness. Now, they are gradually taking significant steps with the support of the Center, which is working to generate a new view of masculinity in these communities.

“I have been married to my wife Delia for 35 years, we have raised our children and I can say that you feel great peace when you learn to respect your partner and to show your innermost emotions,” said Ticuña, a participant in the initiative.

“Being head of household is hard, but it doesn’t give me the right to mistreat. I decided not to be like my father and to be a different kind of person in order to lead a happy life with her and our children,” he said, sitting at the entrance to his home in Canincunca. 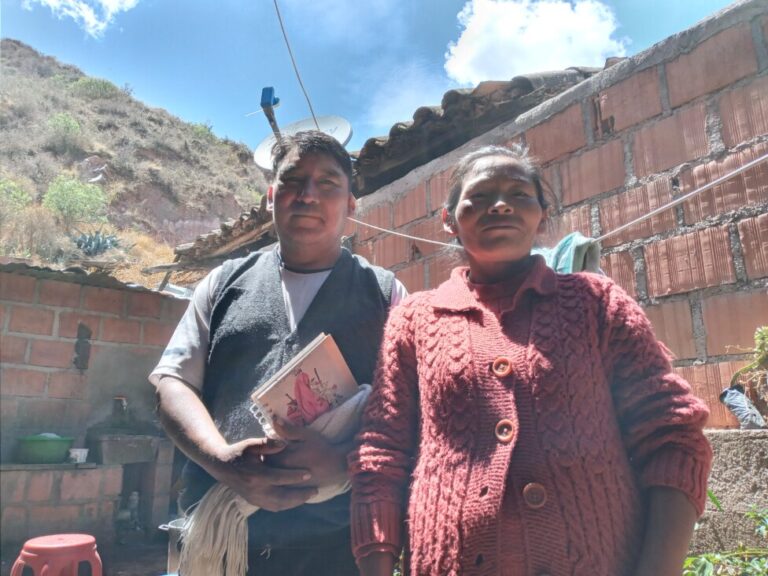 Hilario Quispe, a farmer from the Secsencalla farming community in the town of Andahuaylillas, in the Peruvian highlands region of Cuzco, poses for a photo with his wife Hilaria Mena. For him it was a revelation to understand that the tasks she performs at home are work, and his commitment now is to share them. CREDIT: Mariela Jara/IPS

Recognizing that women do work

Hilario Quispe, a 49-year-old farmer from the Secsencalla community in the town of Andahuaylillas, told IPS that in his area there is a great deal of machismo.

In his home, at 3100 meters above sea level, he said that he has been able to understand that women also work when they are at home.

“Actually, they do more than men, we have only one job, but they wash, cook, weave, take care of the children, look after the animals, go out to the fields…And I used to say: my wife doesn’t work,” he reflected.

Because of the distribution of tasks based on stereotyped gender roles, women spend more time than men on unremunerated care tasks in the household.

INEI reported in 2021 that in the different regions of the country, Peruvian women have a greater overall workload than men because the family responsibilities fall on their shoulders.

In rural areas, women work an average of 76 hours per week, 47 of which are in unpaid activities involving work in the home, both caring for their families and their crops.

In the case of men, their overall workload is 64 hours per week, most of which, 44 hours, are devoted to paid work. 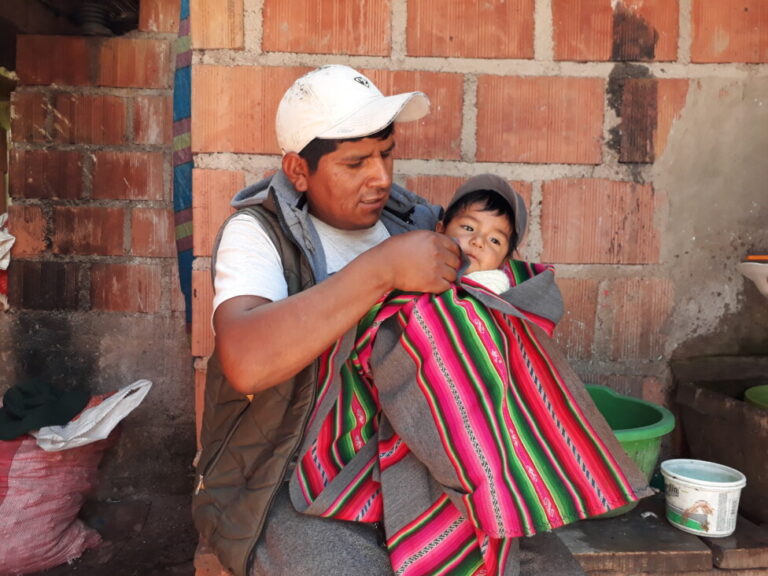 Saúl Huamán is a family farmer in the rural community of Secsencalla. He recognizes that machismo is still a daily reality in Peru’s Andes highlands regions, but he strives to demonstrate day by day that he can be different and can achieve a life based on respect with his partner and their six-month-old son, Luas. CREDIT: Mariela Jara/IPS

Pozo, with the Flora Tristán Center, cited data from the official report that found that in the countryside, married women spend 17 hours a week in kitchen activities and men only four; in housekeeping seven and their partners three; and in childcare 11 and their husbands seven.

Quispe, who with his wife, Hilaria Mena, has four children between the ages of six and 17, said it was a revelation to understand that the different activities his wife performs at home are work.

“If she wasn’t there, everything would fall apart. But I am not going to wait for that to happen, I am committed to stop being machista. Those ideas that have been put in our minds as children do not help us have a good life,” he remarked.

The department of Cuzco is a Peruvian tourist area, where the Inca citadel of Machu Picchu is the main attraction. It has more than 1.3 million inhabitants, of which 40 percent live in rural areas where agriculture is one of the main activities. Much of it is subsistence farming, which requires the participation of the different members of the family.

This is precisely the case of the Secsencalla farming community, where, although the new generations have made it to higher education, they are still tied to the land. 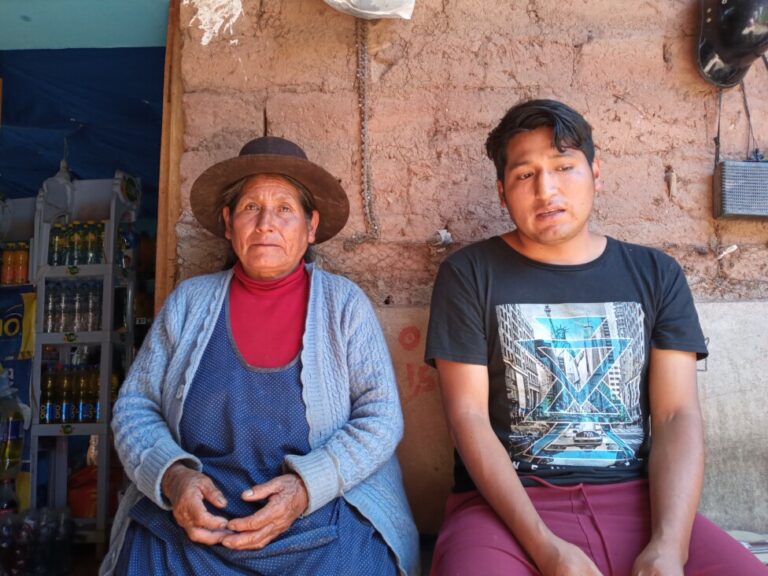 Rolando Tito sits next to his mother Faustina Ocsa. He believes that men can experience their masculinity differently, without machismo or violence, with equal relationships with women. The university student is also actively involved in agricultural work in his rural village of Secsencalla, in the Andean region of Cuzco, in southern Peru. CREDIT: Mariela Jara/IPS

Rolando Tito, 25, is in his third year of systems engineering at the National University of Cuzco, and helps his mother, Faustina Ocsa, 64, with the agricultural work.

“I want to better myself and continue helping my mother, she is a widow and although she was unable to study, she always encouraged me to do so. Times are no longer like hers when women didn’t have opportunities, but there are still men who think they should stay in the kitchen,” he told IPS, with his Quechua-speaking mother at his side.

Sitting by the entrance to the community’s bodega, which is often used as a center for meetings and gatherings, with the help of a translator, his mother recalled that she experienced a lot of violence, that fathers were not supportive of their daughters and that they mistreated their wives. And she said she hoped that her son would be a good man who would not follow in the footsteps of the men who came before him.

“I have learned about equality between men and women,” her son said. “For example, I am helping in the house, I am cooking and washing, that does not make me less of a man, and when I have a partner I will not have the idea that she has to serve me. Together we will work in the house and on the farm.”

Brian Junior Quispe, a 19-year-old from the community, who is about to begin studying veterinary medicine, said he now knows that “men should not take advantage of women, but rather support each other to get ahead together.”

The same sentiment was expressed by Saúl Huamán, 35, who has become a father for the first time with his baby Luas, six months old.

“Now I have to worry about three mouths to feed. I used to be a machine operator but now I only work in the fields and I have to work hard to make it profitable. With my wife Sonia we share the chores, while she cooks I watch the baby, and I am also learning to prepare meals,” he says as his smiling wife listens.

“It is like sowing the seed of equality, you have to water and nurture it, and then harvest the fruits, which is a better life for women and men,” she said.