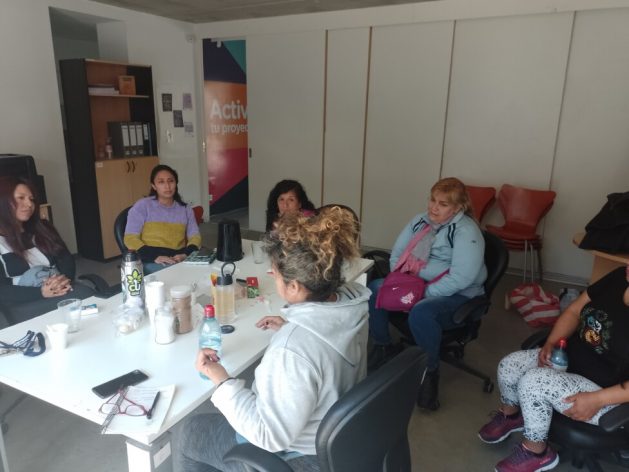 Women gather at the Punto Violeta, a center where different government agencies and social organisations seek to address the gender-based violence suffered by women in the Padre Mugica neighborhood, or Villa 31, a shantytown in Argentina's capital city. CREDIT: Daniel Gutman/IPS

BUENOS AIRES, Oct 4 2022 (IPS) - The Padre Carlos Mugica neighborhood looks like another city within the Argentine capital, which most people usually see from up above as they drive past on the freeway but have never visited. It is a shantytown in the heart of Buenos Aires, of enormous vitality and where women are organizing to confront the various forms of violence that affect them.

“I have a history of gender violence. And what I found here is that many other women have experienced similar situations in their lives,” says Graciela, seated at the table of the weekly Women’s Meeting, in a small locale in the most modern sector of the neighborhood, called Punto Violeta, which has become a reference point for victims of violence.

"We centralize the care at the Punto Violeta because, although the violence here is no different from that in other parts of the city, many women find it difficult to leave the neighborhood because they don't know how." -- Carolina Ferro

Traditionally known in Buenos Aires as Villa 31 and home to more than 40,000 inhabitants, the neighborhood’s name honors a Catholic priest and activist who worked with poor families, who was killed during the 1976-1983 military dictatorship.

The slum is located on more than 70 hectares of publicly owned railway land just a few minutes from the center of the capital and separated by the train tracks from Recoleta, one of the city’s most upscale neighborhoods. Families started to occupy the area 90 years ago and the shantytown grew as a result of the successive crises that hit the Argentine economy and with the influx of poor immigrants from Paraguay, Bolivia and Peru.

Different governments have tried to eradicate the slum throughout its history, but in recent years the official view of the neighborhood has changed. Today Villa 31 is halfway through a slow and laborious process of urbanization and integration into Buenos Aires that the city government launched in 2015.

Thus, it has become a strange place, which mixes hope for a better future with the social woes of poverty and overcrowding.

There are wide streets with public transport and modern concrete housing blocks where once there was only a total absence of the state. But there are also still many narrow, dark passageways, where precarious brick and sheet metal houses up to four stories high seem on the verge of crumbling on top of each other. 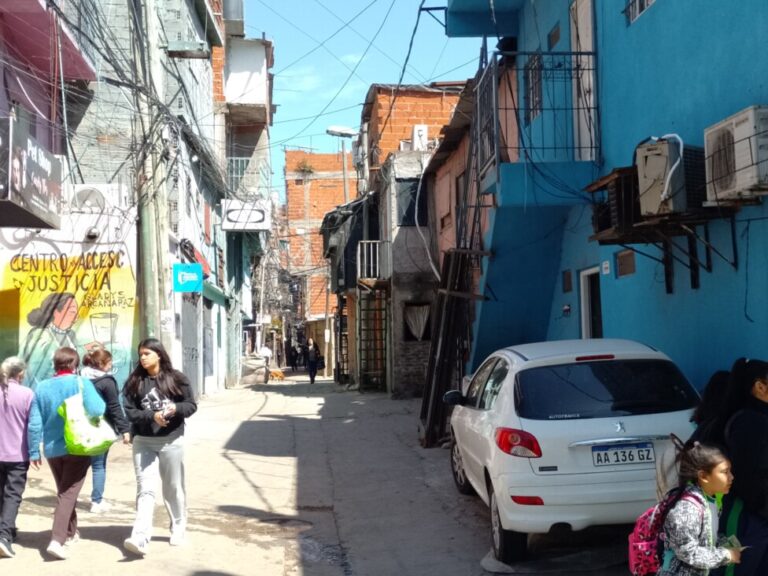 View of one of the passageways in the Padre Mugica neighborhood, a slum located in the heart of Buenos Aires. The process of regularizing the informal settlement and integrating it with the city began in 2015, but it is only halfway done and narrow passageways lined with precarious housing coexist with modern roads and buildings. CREDIT: Daniel Gutman/IPS

The struggle for a better life

Graciela, who became a single mother at 18 and now has six children she has had to raise on her own, says she lived in the western province of Santa Fe and decided to move to Buenos Aires in search of a better life, after an accident at work in which she lost a hand. “In order to get a disability pension, I had to be here,” she explains. That’s how she ended up in Villa 31.

She says that this year her ex-partner tried to kill her, cutting her neck several times with a knife, so today she has a panic button given to her by the police.

She shares the things that happen to her at the Women’s Meeting every Wednesday, a space where collective solutions are sought for complicated lives, marked by economic difficulties, overcrowded housing, interrupted studies, lack of opportunities, families with conflicts and a permanent struggle to get ahead.

“It is a weekly meeting where we invite all the women of the neighborhood and we work on emotional strength as a preventive strategy against violence. Sometimes women start to feel that what they experience at home is normal,” says Carolina Ferro, a psychologist of the Women’s Encounter Program of the Undersecretariat of Public Safety and Order of the Buenos Aires Ministry of Justice and Security.

Ferro explains that the goal is to bolster the self-esteem of the women victims of violence. “Once they are empowered, they can go out to work to become economically independent or go back to school. We help them to be themselves,” she says during the last meeting in September, in which IPS was allowed to participate.

“This is part of a comprehensive care project. We centralize the care at the Punto Violeta because, although the violence here is no different from that in other parts of the city, many women find it difficult to leave the neighborhood because they don’t know how,” she adds. 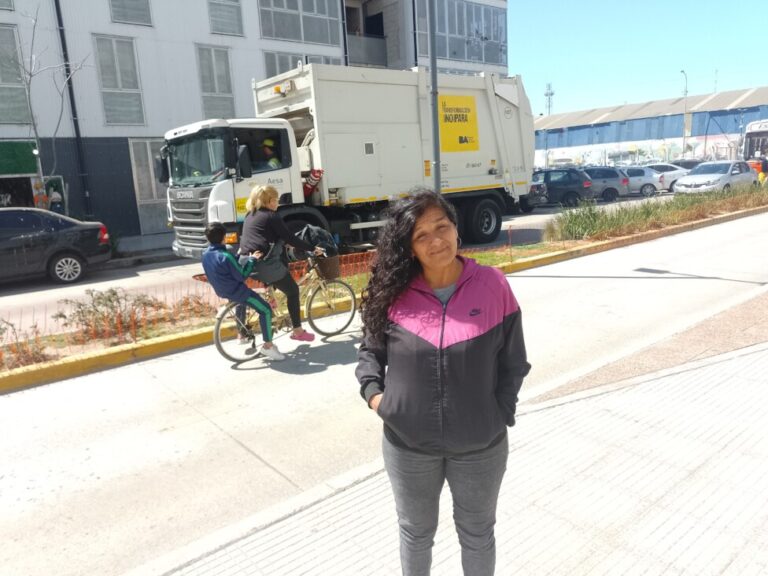 Graciela, a mother of six children whom she has had to raise on her own, is one of the participants in the Punto Violeta in Padre Mugica, where women come together to find solutions to the violence they have experienced and to empower themselves to improve their lives, those of their families and the community. CREDIT: Daniel Gutman/IPS

When the psychologist asks the women what has been the greatest achievement in their lives, excited responses emerge. One says, “Raising my children on my own”; another says, “Going back to school as an adult, and graduating”; and another says, “Having stopped working as a house cleaner to open my own little salon where I do therapeutic massage.”

“This is the first time in my life that I have spoken to a psychologist,” says one of the participants in the meeting, who is anguished because her son, whom she dreamed would become a university graduate and professional, dropped out of school. The group coordinator and her fellow participants insist on the need not to place expectations on another person, whose life cannot be controlled, in order to avoid frustration.

In 2021, in this South American country of 45 million people, 251 women were killed by gender violence, an average of one murder every 35 hours, according to the National Registry of Femicides, kept by the Supreme Court of Justice since 2015. In 88 percent of the cases, the victim knew her aggressor, and in 39 percent she lived with him. In 62 percent of the cases she was killed by her partner or ex-partner.

The Supreme Court has been conducting the survey since 2015 and the figures have not varied much, with approximately 20 percent of femicides in the city of Buenos Aires committed in shantytowns and slums. In any case, during 2020, the most critical year of the COVID-19 pandemic, calls to emergency numbers increased fivefold. 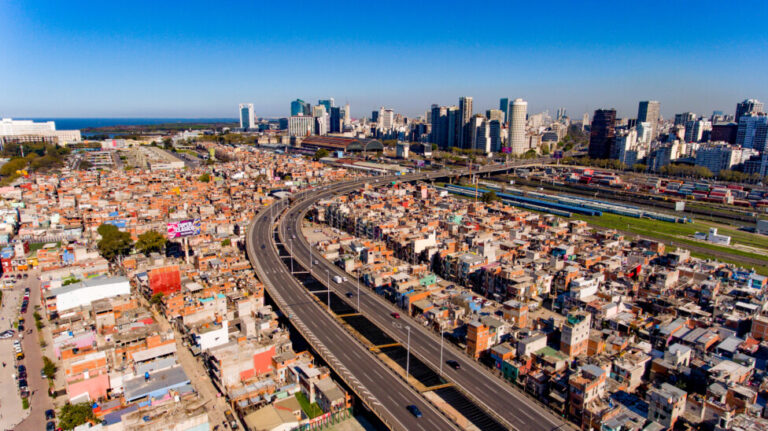 Aerial view of the Padre Mugica neighborhood, or Villa 31, as many still call it, with downtown Buenos Aires in the background. The 90-year-old informal settlement now straddles a freeway and has more than 40,000 inhabitants, just minutes from the heart of the Argentine capital. CREDIT: City of Buenos Aires

It was precisely during the pandemic that the Punto Violeta was born, as a government response to a longstanding concrete demand in the neighborhood for a women’s center.

“When the pandemic began and mobility restrictions were imposed, it was a very difficult time in the neighborhood, when some local women told us that we should not forget the women victims of violence, who had been locked in their homes with their aggressors,” Bárbara Bonelli, deputy ombudsperson in the Buenos Aires city government and a driving force behind the creation of the center, told IPS.

Punto Violeta is the name given in Argentina and other countries to spaces designed to promote the defense of the rights of women and sexual minorities, in which public agencies work together with social organizations.

The program in Mugica involves several public agencies, which take turns on different days of the week, with the mission of providing a comprehensive approach to the problem of violence.

At the center victims can file a criminal complaint of gender violence with representatives of the Public Prosecutor’s Office, obtain a protection measure or gain access to psychological care or a social worker.

“Punto Violeta was created to respond to a demand that existed in the neighborhood. I would say that the problem of violence against women is no different in poor neighborhoods, but it does need to be addressed at a local level,” says Bonelli.

“Since it is very difficult for them to leave the neighborhood, the state did not reach these women. We hope that the Punto Violeta will contribute to the effective insertion of women from the neighborhood in terms of employment, education, finance, economic and social issues,” she adds.