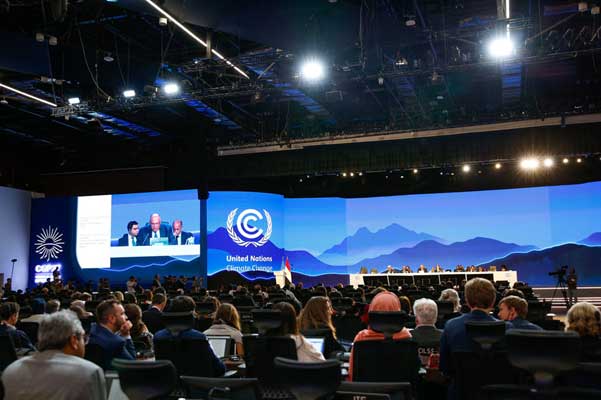 After days of intense negotiations that stretched into early Sunday morning in Sharm el-Sheikh, countries at the latest UN Climate Change Conference, COP27, reached agreement on an outcome that established a funding mechanism to compensate vulnerable nations for ‘loss and damage’ from climate-induced disasters.

SHARM EL-SHEIKH, Egypt, Nov 22 2022 (IPS) - COP 27 delivered on what was the ‘litmus test’ for its success – consensus on the establishment of a fund on loss and damage. What seemed impossible was made possible, largely due to the unity of the G77 and China and the role of the Egyptian Presidency. Also important were efforts by civil society groups who put pressure on the United States, the main blocker to having the fund.

Until the final hours of the climate talks, it was uncertain whether the deal would be sealed, given behind the scenes diplomacy by the COP Presidency team. The G77/China was led by Pakistan, that wielded a strong moral voice at the conference, following the catastrophic and devastating floods which was attributed to climate change.

It was a big win for loss and damage issues at Sharm el-Sheikh, to spotlight what was once seen as an ‘orphan child’ of the process, with usual priority given to mitigation (emissions reductions), while adaptation to climate impacts is treated as the ‘step child’.

However, there is nothing significantly meaningful on finance, given the overall stance of developed countries in the process, with the loss and damage fund remaining empty for now, with the hope that it will deliver more in the coming years when the fund is set up and is resourced.

The Santiago Network on Loss and Damage (SNLD), which is to be a technical assistance facility for developing countries also was devoid of any financial commitments. The finance decisions adopted only exhorted developed countries to deliver on the USD 100 billion per year by 2020 pledges and to double adaptation funding.

New pledges, totalling more than USD 230 million, were made to the Adaptation Fund at COP27, a small sum given the scale of the needs in developing countries.

An overarching alarm and agony of many developing countries at the Sharm el-Sheikh talks were the persistent efforts by developed countries to not own up to their historical responsibilities for past emissions, and to delete or dilute the foundational principles of equity and common but differentiated responsibilities and respective capabilities (CBDRRC) between developed and developing countries under the UNFCCC and the Paris Agreement.

This attempt was repeatedly called out by developing countries, especially from the Like-minded developing countries (LMDC), the African Group, the Arab Group and ABU (Argentina, Brazil and Uruguay). The effort to remove this differentiation was at the heart of the fight on many fronts, especially on the issue of mitigation and finance, which seemed like a repeat of negotiations in Paris.

Developed countries continued their efforts at using terms such as ‘major emitters’, ‘major economies’, and the ‘G20’ in relation to who should show more ambition on mitigation, while in the discussion on finance, it was about “broadening the donor base”.

The retort from developing countries was that these issues were already settled under the Paris Agreement and that the principles and provisions of the Agreement should be respected and implemented.

The climate talks which began on Sunday, 6 Nov, were supposed to end Friday, 18 Nov, but decisions were only gavelled early morning of Sunday, 20 Nov, when the official plenary began at 4 am. Delegates were visibly exhausted and bleary-eyed following long days and nights of negotiations which were particularly intense since Wed, 16 Nov.

Apart from the loss and damage fund, other issues that were deadlocked during the week were the cover decisions (as to what they should contain), the mitigation work programme, the global goal on adaptation and matters related to finance.

Among the sticky issues in relation to mitigation were on how the temperature goal of 1.5°C should be reflected, how to advance efforts following the controversial paragraph adopted on the phase down of unabated coal and inefficient fossil fuel subsidies from COP 26 decision in Glasgow, and the peaking of emissions by 2025.

In order to avoid spats in public given the wide divergence between Parties in the full glare of the public and world media, the COP 27 Presidency team resorted to informal consultations and diplomatic efforts behind the scenes to find compromises on the difficult issues with draft texts which were reviewed by Parties.

This was the reason for the delay in convening the final plenary, as Parties also wanted to gauge if they could live with the draft decisions, as they assessed the overall balance of the package of decisions among the key issues of mitigation, adaptation, loss and damage and finance.

COP 27 President Sameh Shoukry convened plenary and gavelled the adoption of the various decisions. Following the adoption of the decisions, he said that “despite the difficulties and challenges of our times, the divergence of views, level of ambition or apprehension, we remain committed to the fight against climate change…. and that as much as sceptics and pessimists thought that climate action will be taking a back seat on the global agenda, we rose to the occasion, upheld our responsibilities and undertook the important decisive political decisions that millions around the world expect from us.”

Minister Shoukry added that “We listened to the calls of anguish and despair resonating from one end of Pakistan to the other, a country with literally more than a third of its area flooded, a resounding alarm of the future that awaits us beyond 1.5 degrees. A bleak future…, a future that I do not wish for my grandchildren nor for any child on this planet.”

“Today, here in Sharm el-Sheikh, we establish the first ever dedicated fund for loss and damage, a fund that has been so long in the making. It was only appropriate that this COP, the implementation COP in Africa, is where the fund is finally established.”

“Millions around the globe can now sense a glimmer of hope that their suffering will finally be addressed, swiftly and appropriately,” he said further, adding that “We leave Sharm el-Sheikh with renewed hope in the future of our planet, with an even stronger collective will and more determination to achieve the temperature goal of the Paris Agreement.”

Among the significant decisions adopted are highlighted below.

The decision “Stresses that the increasingly complex and challenging global geopolitical situation and its impact on the energy, food and economic situations, as well as the additional challenges associated with the socioeconomic recovery from the coronavirus pandemic, should not be used as a pretext for backtracking, backsliding or de-prioritizing climate action.”

On enhancing ambition and implementation, the decision “Resolves to implement ambitious, just, equitable and inclusive transitions to low-emission and climate-resilient development in line with the principles and objectives of the Convention, the Kyoto Protocol and the Paris Agreement, taking into account this decision, the Glasgow Climate Pact (GCP) and other relevant decisions of the COP and the CMA.”

On mitigation, the decision “Notes with serious concern the finding in the latest synthesis report on nationally determined contributions (NDCs) that the total global greenhouse gas emission (GHG) level in 2030, taking into account implementation of all latest NDCs, is estimated to be 0.3 per cent below the 2019 level, which is not in line with least-cost scenarios for keeping global temperature rise to 2 or 1.5 °C” and “Emphasizes the urgent need for Parties to increase their efforts to collectively reduce emissions through accelerated action and implementation of domestic mitigation measures in accordance with Article 4.2 of the Paris Agreement.” (Article 4.2 of the Paris Agreement states: “Each Party shall prepare, communicate and maintain successive NDCs that it intends to achieve. Parties shall pursue domestic mitigation measures, with the aim of achieving the objectives of such contributions.”)

The decision also “Calls upon Parties to accelerate the development, deployment and dissemination of technologies, and the adoption of policies, to transition towards low-emission energy systems, including by rapidly scaling up the deployment of clean power generation and energy efficiency measures, including accelerating efforts towards the phasedown of unabated coal power and phase-out of inefficient fossil fuel subsidies, while providing targeted support to the poorest and most vulnerable in line with national circumstances and recognizing the need for support towards a just transition.” (This is a repeat of the decision from the GCP).

On finance, the decision “Notes with concern the growing gap between the needs of developing country Parties, in particular those due to the increasing impacts of climate change and their increased indebtedness, and the support provided and mobilized for their efforts to implement their NDCs, highlighting that such needs are currently estimated at USD 5.8–5.9 trillion26 for the pre-2030 period.”

It also “Expresses serious concern that the goal of developed country Parties to mobilize jointly USD 100 billion per year by 2020…has not yet been met.

The decision also “Calls on the shareholders of multilateral development banks (MDBs) and international financial institutions (IFIs) to reform MDB practices and priorities, align and scale up funding, ensure simplified access and mobilize climate finance from various sources and encourages MDBs to define a new vision and commensurate operational model, channels and instruments that are fit for the purpose of adequately addressing the global climate emergency…”.

In a separate decision, Parties agreed to “establish new funding arrangements for assisting developing countries that are particularly vulnerable to the adverse effects of climate change, in responding to loss and damage, including with a focus on addressing loss and damage by providing and assisting in mobilizing new and additional resources, and that these new arrangements complement and include sources, funds, processes and initiatives under and outside the Convention and the Paris Agreement.”

Parties decided “that the work programme shall be operationalized through focused exchanges of views, information and ideas, noting that the outcomes of the work programme will be non-prescriptive, non-punitive, facilitative, respectful of national sovereignty and national circumstances, take into account the nationally determined nature of NDCs and will not impose new targets or goals.” (This was a grave concern to many developing countries).

It was also decided “that the work programme shall function in a manner that is consistent with the procedures and timelines for communication of successive NDCs established in the Paris Agreement,” and “that the scope of the work programme should be based on broad thematic areas relevant to urgently scaling up mitigation ambition and implementation in this critical decade…”