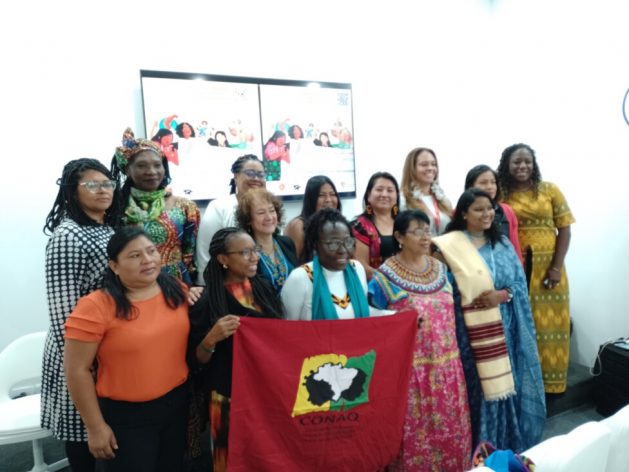 Representatives of native women from Latin America and other continents pose for pictures at COP27, taking place in the Egyptian city of Sharm el-Sheikh. Some 250 indigenous people from around the world are attending the 27th climate conference. CREDIT: Daniel Gutman/IPS

SHARM EL-SHEIKH , Nov 12 2022 (IPS) - Indigenous peoples are no longer content just to attend as observers and to be seen as victims of the impacts of the current development model, at the 27th Conference of the Parties (COP27) on Climate Change. That is why they came to the summit in Egypt with an agenda of their own, including the demand that their communities directly receive funding for climate action.

Billions of dollars in aid funds are provided each year by governments, private funds and foundations for climate adaptation and mitigation. Donors often seek out indigenous peoples, who are now considered the best guardians of climate-healthy ecosystems. However, only crumbs end up actually reaching native territories.

“We are tired of funding going to indigenous foundations without indigenous people,” Yanel Venado Giménez told IPS, at the indigenous peoples’ stand at this gigantic world conference, which has 33,000 accredited participants. “All the money goes to pay consultants and the costs of air-conditioned offices.”

“International donors are present at the COP27. That is why we came to tell them that direct funding is the only way to ensure that climate projects take into account indigenous cultural practices. We have our own agronomists, engineers, lawyers and many trained people. In addition, we know how to work as a team,” she added.

Giménez, a member of the Ngabe-Buglé people, represents the National Coordinating Body of Indigenous Peoples in Panama (CONAPIP) and is herself a lawyer.

That indigenous peoples, because they often live in many of the world’s best-conserved territories, are on the front line of the battle against the global environmental crisis is beyond dispute.

For this reason, a year ago, at COP26 in Glasgow, Scotland, the governments of the United Kingdom, Norway, the United States, Germany, the Netherlands and 17 private donors pledged up to 1.7 billion dollars for mitigation and adaptation actions by indigenous communities.

However, although there is no precise data on how much of that total has actually been forthcoming, the communities say they have received practically nothing.

“At each of these conferences we hear big announcements of funding, but then we return to our territories and that agenda is never talked about again,” Julio César López Jamioy, a member of the Inga people who live in Putumayo, in Colombia’s Amazon rainforest, told IPS.

“In 2021 we were told that it was necessary for us to build mechanisms to access and to be able to execute those resources, which are generally channeled through governments. That is why we are working with allies on that task,” he added. 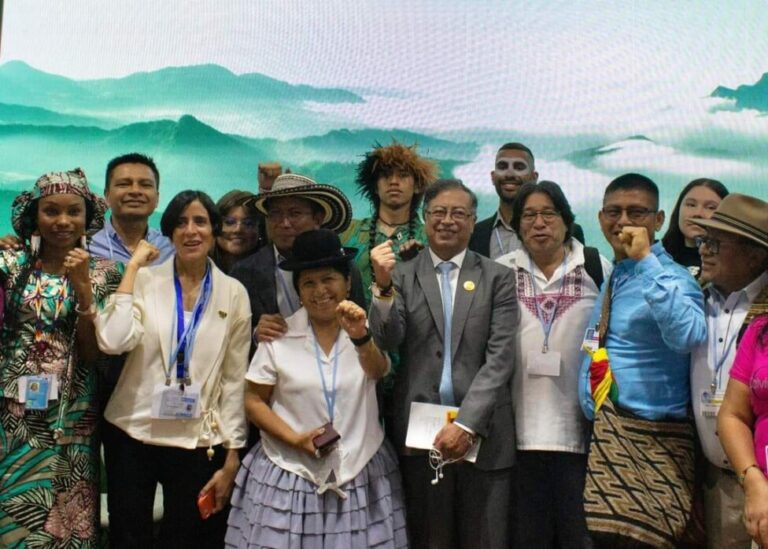 Colombian President Gustavo Petro (grey suit) poses for pictures with a group of Latin American indigenous people at the end of a meeting they held in Sharm el-Sheikh during COP27. CREDIT: Courtesy of Jesús Amadeo Martínez

López Jamioy, who is coordinator of the National Organization of Indigenous Peoples of the Colombian Amazon (OPIAC), believes it is time to thank many of the non-governmental organizations for the services they have provided.

“Up to a certain point we needed them to work with us, but now it is time to act through our own organizational structures,” he said.

There is no record of how many indigenous Latin Americans are in Sharm el-Sheikh, a seaside resort in the Sinai Peninsula in southern Egypt, thanks to different sources of funding, but it is estimated to be between 60 and 80.

Approximately 250 members of indigenous peoples from all over the world are participating in COP27, in the part of the Sharm el-Sheikh Convention Center that hosts social organizations and institutions.

From there, they are raising their voices and their proposals to the halls and stands that host the delegates and official negotiators of the 196 parties to the United Nations Framework Convention on Climate Change (UNFCCC), the organizer of these annual summits.

The space shared by the indigenous people is a large stand with a couple of offices and an auditorium with about 40 chairs. Here, during the two weeks of COP27, from Nov. 6 to 18, there is an intense program of activities involving the agenda that the indigenous people have brought to the climate summit, which has drawn the world’s attention. 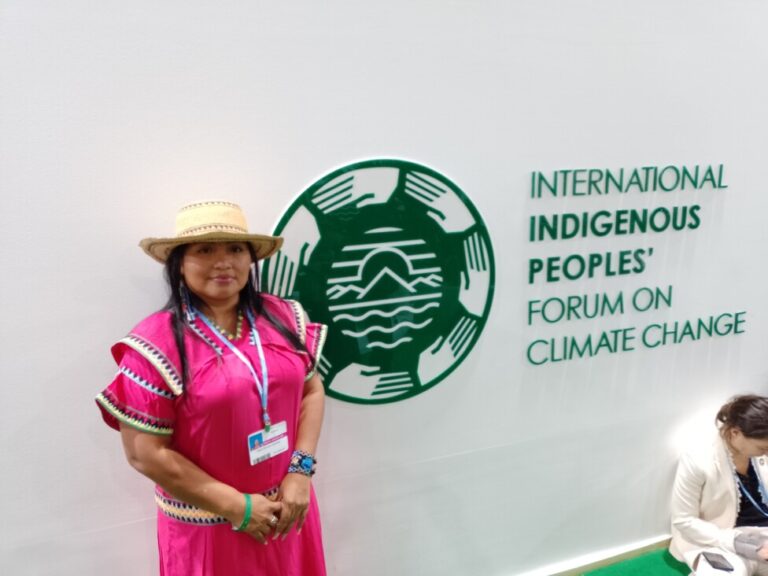 Panamanian indigenous activist Yanel Venado Giménez poses for a photo at the stand that indigenous peoples from around the world share at COP27, at the Sharm el-Sheikh Convention Center in Egypt. She leads a fund to help indigenous women, one of the few that receive direct financing for Latin American indigenous peoples. CREDIT: Daniel Gutman/IPS

At the start of the Conference, a group of Latin American indigenous people were received by Colombian President Gustavo Petro. They obtained his support for their struggle against extractive industries operating in native territories and asked him to liaise with other governments.

“Generally, governments make commitments to us and then don’t follow through. But today we have more allies that allow us to have an impact and put forward our agenda,” Jesús Amadeo Martínez, of the Lenca people of El Salvador, told IPS.

The indigenous representatives came to this Conference with credentials as observers – another crucial issue, since they are demanding to be considered part of the negotiations as of next year, at COP28, to be held in Dubai.

The proposal was led by Gregorio Díaz Mirabal, a representative of the Kurripaco people in Peru’s Coordinating Body for the Indigenous Organizations of the Amazon Basin (COICA), who told a group of journalists that “We existed before the nation-states did; we have the right to be part of the debate, because we are not an environmental NGO.” 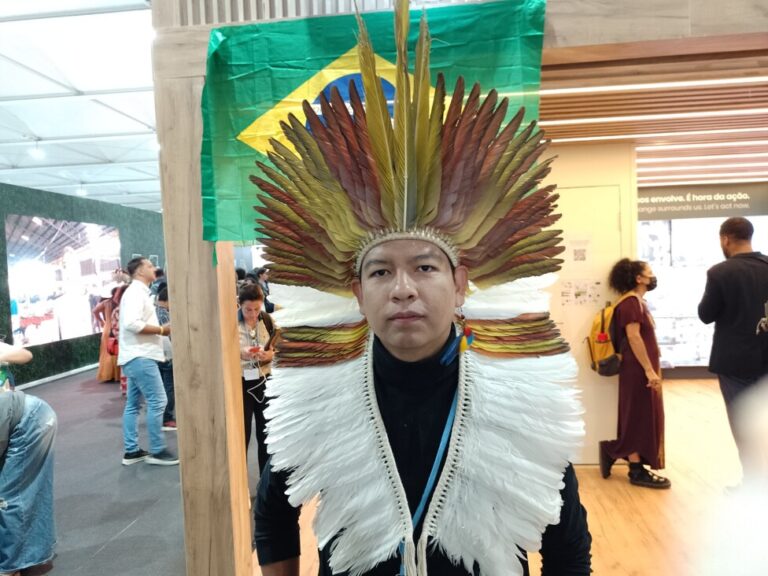 Eric Terena of the indigenous people of the same name, who live in southern Brazil, stands in the corridors of the 27th Climate Change Conference in Egypt. He is hopeful about President-elect Luiz Inácio Lula da Silva’s return to power, but argues that indigenous peoples must have direct access to environmental and climate funds. CREDIT: Daniel Gutman/IPS

From beneficiaries to partners?

Native communities have always been seen as beneficiaries of climate action projects in their territories, channeled through large NGOs that receive and distribute the funds.

But back in 2019, the United States Agency for International Development (USAID) issued a Policy for Promoting the Rights of Indigenous Peoples (PRO-IP), which explores the possibility of funding reaching native communities more effectively.

Among the hurdles are that project approval times are sometimes too fast for the indigenous communities’ consultative decision-making methods, and that many communities are not legally registered, so they need an institutional umbrella.

Experiments in direct financing are still in their infancy. Sara Omi, of the Emberá people of Panama, told IPS that they were able to receive direct financing for Mexican and Central American communities from the Mesoamerican Fund for capacity building of indigenous women.

“We focus on sustainable agricultural production and in two years of work we have supported 22 projects in areas such as the recovery of traditional seeds. But we do not have large amounts of funds. The sum total of all of our initiatives was less than 120,000 dollars,” she explained.

Omi, a lawyer who graduated from the private Catholic University of Santa María La Antigua in Panama and was able to study thanks to a scholarship, said indigenous peoples have demonstrated that they are ready to administer aid funds.

“Of course there must be accountability requirements for donors, but they must be compatible with our realities. Only crumbs are reaching native territories today,” she complained.

Brazil’s president-elect, Luiz Inácio Lula da Silva, will participate in the second week of COP27, and this is cause for hope for the peoples of the Amazon jungle, who in the last four years have suffered from the aggressive policies and disregard of outgoing far-right President Jair Bolsonaro regarding environmental and indigenous issues.

“In the Bolsonaro administration, funds that provided financing were closed,” Eric Terena, an indigenous man who lives in southern Brazil, near the border with Bolivia and Paraguay, told IPS. “Now they will be revived, but we don’t want them to be accessed only by the government, but also by us. The systems today have too much bureaucracy; we need them to be more accessible because we are a fundamental part of the fight against climate change.

“We see that this COP is more inclusive than any of the previous ones with regard to indigenous peoples, but governments must understand that it is time for us to receive funding,” said Terena, one of the leaders of the Terena people.

IPS produced this article with the support of Climate Change Media Partnership 2022, the Earth Journalism Network, Internews, and the Stanley Center for Peace and Security.