Egyptian Foreign Minister Sameh Shoukry, chair of COP27, reads the nine-page Sharm El Sheikh Implementation Plan, the document that concluded the climate summit on Sunday Nov. 20, to an exhausted audience after tough and lengthy negotiations that finally reached an agreement to create a fund for loss and damage, a demand of the global South. CREDIT: Kiara Worth/UN

SHARM EL SHEIKh , Nov 20 2022 (IPS) - They were on the brink of shipwreck and did not leave happy, but did feel satisfied that they got the best they could. The countries of the global South achieved something decisive at COP27: the creation of a special fund to address the damage and loss caused by climate change in the most vulnerable nations.

The fund, according to the Sharm El Sheikh Implementation Plan, the official document approved at dawn on Sunday Nov. 20 in this Egyptian city, should enable “rehabilitation, recovery and reconstruction” following extreme weather events in these vulnerable countries.

Decisions on who will provide the money, which countries will benefit and how it will be disbursed were left pending for a special committee to define. But the fund was approved despite the fact that the issue was not even on the official agenda of the summit negotiations, although it was at the center of the public debate before the conference itself.

“We are satisfied that the developed countries have accepted the need to create the Fund. Of course, there is much to discuss for implementation, but it was difficult to ask for more at this COP,” Ulises Lovera, Paraguay’s climate change director, told IPS, weary from a longer-than-expected negotiation, early Sunday morning at the Sharm El Sheikh airport.

“This COP has taken an important step towards justice. I welcome the decision to establish a loss and damage fund and to operationalize it in the coming period,” said U.N. Secretary-General António Guterres. He also described as an achievement that a “red line” was not crossed, that would take the rise in global temperature above the 1.5-degree limit.

More than 35,000 people from nearly 200 countries participated in the 27th Conference of the Parties (COP27) on Climate Change in Sharm El Sheikh, an Egyptian seaside resort on the Red Sea, where the critical dimension of global warming in the different regions of the world was on display, sometimes dramatically.

Practically everything that has to do with the future of the modes of production and life of humanity – starting with energy and food – was discussed at a mega-event that far exceeded the official delegations of the countries and the great leaders present, such as U.S. President Joe Biden and the Brazilian president-elect, Luiz Inácio Lula da Silva.

Hundreds of social organizations, international agencies and private sector stakeholders came here to showcase their work, seek funding, forge alliances, try to influence negotiations, defend their interests or simply be on a stage that seemed to provide a space for all kinds of initiatives and businesses.

At the gigantic Sharm El Sheikh International Convention Center there was also a global fair with non-stop activities from morning to night in the various pavilions, in stands with auditoriums of between 20 and 200 seats, where there was a flurried program of presentations, lectures and debates, not to mention the more or less crowded demonstrations of activists outside the venue.

In addition, government delegates negotiated on the crux of the summit: how to move forward with the implementation of the Paris Agreement, which at COP21 in 2015 set global climate change mitigation and adaptation targets. 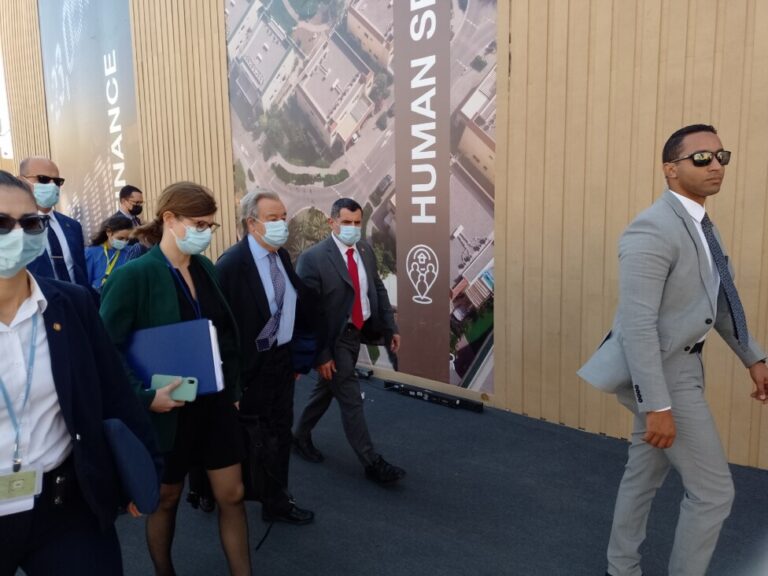 United Nations Secretary-General António Guterres (3rd-R) walks hurriedly through the Sharm El Sheikh Convention Center during the last intense hours of the COP27 negotiations, when there were moments when it seemed that there would be no agreement and the climate summit would end in failure. CREDIT: Daniel Gutman/IPS

On the brink of failure

Once again, the nine-page Sharm El Sheikh Implementation Plan did not include in any of its pages a reference to the need to abandon fossil fuels, but only coal.

The document was the result of a negotiation that should have ended on Friday Nov. 18, but dragged on till Sunday, as usually happens at COPs. What was different on this occasion was a very tough discussion and threats of a walkout by some negotiators, including those of the European Union.

But in the end, the goal of limiting the temperature increase to 1.5 degrees Celsius, established in the Paris Agreement, was maintained, although several countries tried to make it more flexible up to 2.0 degrees, which would have been a setback with dramatic effects for the planet and humanity, according to experts and climate activists.

“Rapid, deep and sustained reductions in global greenhouse gas emissions (are) required – lowering global net greenhouse gas emissions by 43 percent by 2030 relative to the 2019 level – to limit global warming to 1.5°C target,” reads the text, although no mention is made of oil and gas, the fossil fuels most responsible for those emissions, in one of the usual COP compromises, since agreements are reached by consensus. 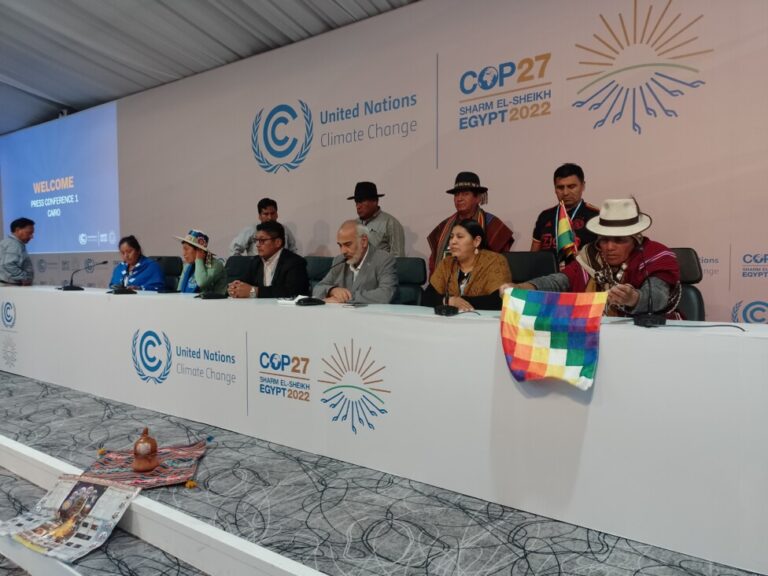 The Bolivian delegation in Sharm El Sheikh, which included officials as well as leaders of indigenous communities from the South American country, take part in a meeting with journalists at COP27 to demand more ambitious action. CREDIT: Daniel Gutman/IPS

The priorities of the South

Developing countries, however, focused throughout the COP on the Loss and Damage Fund and other financing mechanisms to address the impacts of rising temperatures and mitigation actions.

“We need financing because we cannot deal with the environmental crisis alone. That is why we are asking that, in order to solve the problem they have caused, the rich nations take responsibility,” Diego Pacheco, head of the Bolivian delegation to Sharm El Sheikh, told IPS.

Environmental organizations, which showed their power in Egypt with the presence of thousands of activists, also lobbied throughout COP27 for greater commitments, including mitigation actions.

“This conference cannot be considered an implementation conference because there is no implementation without phasing out all fossil fuels,” the main cause of the climate crisis, said Zeina Khalil Hajj of the international environmental organization 350.org.

“Together for implementation” was precisely the slogan of COP27, calling for a shift from commitments to action.

“A text that does not stop fossil fuel expansion, that does not provide progress from the already weak Glasgow Pact (from COP26) makes a mockery of the millions of people living with the impacts of climate change,” said Khalil Hajj, head of global campaigning at 350.org. 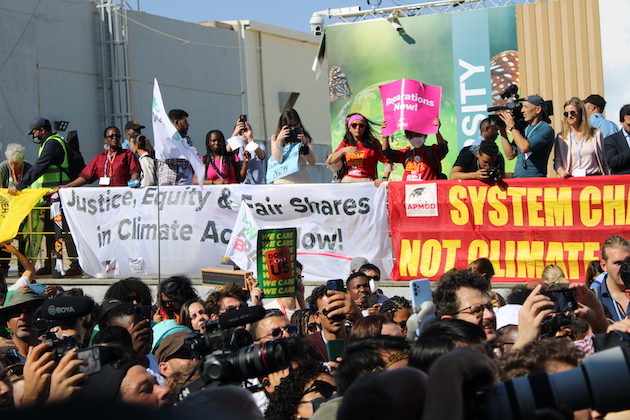 One of the demonstrations by climate activists at COP27 held in Egypt Nov. 6-20, demanding more ambitious climate action by governments, as well as greater justice and equity in tackling the climate crisis. CREDIT: Busani Bafana/IPS

The crises that came together

Humanity – as recognized by the States Parties in the final document – is living through a dramatic time.

It faces a number of overlapping crises: food, energy, geopolitical, financial and economic, combined with more frequent natural disasters due to climate change. And developing nations are hit especially hard.

The demand for financing voiced by countries of the global South thus takes on greater relevance.

Cecilia Nicolini, Argentina’s climate change secretary, told IPS that it is the industrialized countries, because of their greater responsibility for climate change, that should finance developing countries, and lamented that “the problem is that the rules are made by the powerful.”

However, 80 percent of the money now being spent worldwide on climate change action is invested in the developed world, according to the Global Environment Facility (GEF), the world’s largest funder of climate action, which has contributed 121 billion dollars to 163 countries over the past 30 years, according to its own figures.

In this context, the issue of Loss and Damage goes one step further than adaptation to climate change, because it involves reparations for the specific impacts of climate change that have already occurred, such as destruction caused by droughts, floods or forest fires.

“Those who are bearing the burden of climate change are the most vulnerable households and communities. That is why the Loss and Damage Fund must be established without delay, with new funds coming from developed countries,” said Javier Canal Albán, Colombia’s vice minister of environmental land planning.

“It is a moral and climate justice imperative,” added Canal Albán, who spoke at a press conference on behalf of AILAC, a negotiating bloc that brings together several Latin American and Caribbean countries.

But the text of the outcome document itself acknowledges that there is a widening gap between what developing countries need and what they actually receive.

The financing needs of these countries for climate action until 2030 were estimated at 5.6 trillion dollars, but developed countries – as the document recognized – have not even fulfilled their commitment to provide 100 billion dollars per year, committed since 2009, at COP15 in Copenhagen, and ratified in 2015, at COP21 which adopted the Paris Agreement.

It was the absence of any reference to the need to accelerate the move away from oil and natural gas that frustrated several of the leaders at the COP. “We believe that if we don’t phase out fossil fuels there will be no Fund that can pay for the loss and damage caused by climate change,” Susana Muhamad, Colombia’s environment minister, who was at the two-week conference in Sharm El Sheikh held Nov. 6-20, told IPS.

“We have to put the victims first in order to make an orderly and just transition,” she said, expressing the sentiments of the governments and societies of the South at COP27.