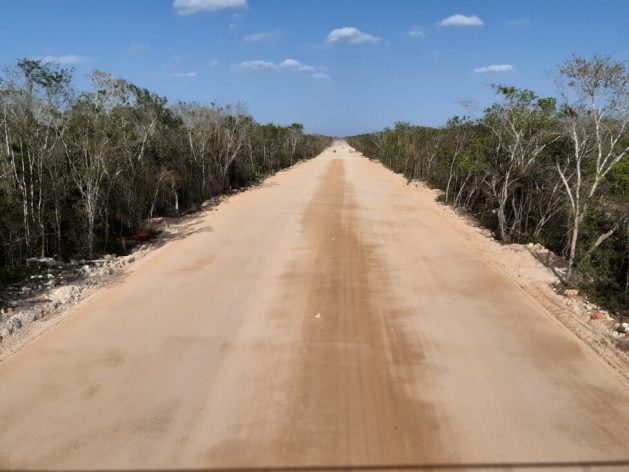 The laying of the Mayan Train along 1500 kilometers through five states in the south and southeast of Mexico, mostly through the Yucatan Peninsula, will damage the fragile jungle ecosystem, with the removal of vegetation and animal species. The photo shows an area cleared of vegetation near the municipality of Valladolid, in the state of Yucatan. CREDIT: Emilio Godoy/IPS

MEXICO CITY, Nov 2 2022 (IPS) - A beige line slashes its way through the Mayan jungle near the municipality of Izamal in the southeastern Mexican state of Yucatán. It is section 3, 172 kilometers long, of the Mayan Train (TM), the most important megaproject of President Andrés Manuel López Obrador’s administration.

The metal scrape of the backhoes tears up the vegetation to open up arteries in the jungle for the laying and construction of the five stops of this part of the future railway network, which is being built at a cost currently estimated at more than 15 billion dollars, 70 percent more than initially planned.

"Everything that is happening in the Yucatán peninsula is affecting the Mayan people, damaging the trees, the water, the animals. It is a part of our territory that is being destroyed. Those who don't produce their own food have to depend on others." -- Pedro Uc

Pedro Uc, an indigenous member of the non-governmental Assembly of Defenders of the Múuch’ Xíinbal Mayan Territory, summed up the environmental impact of the TM in an area of milpa – a traditional system of cultivation of corn, squash, beans and chili peppers – and poultry farming.

“Everything that is happening in the Yucatán peninsula is affecting the Mayan people, damaging the trees, the water, the animals. It is a part of our territory that is being destroyed. Those who don’t produce their own food have to depend on others,” he told IPS from Buctzotz (Mayan for “hair dress”), in Yucatán, some 1,400 km from Mexico City.

Without land, there is no food, stressed the activist, whose organization works in 25 municipalities on the peninsula, which includes the states of Campeche, Quintana Roo and Yucatán, and is home to the second most important jungle massif in Latin America, after the Amazon.

Despite multiple complaints of environmental damage, the Federal Attorney’s Office for Environmental Protection (Profepa) has yet to resolve these complaints, more than two years after construction began.

“It has never carried out its role. It has not addressed the issue, it is merely ornamental. Profepa should attend to the complaints,” said Uc, whose town is located 44 kilometers southeast of Izamal, where one of the railroad stations will be located.

Profepa, part of the Ministry of the Environment and Natural Resources (Semarnat), received two complaints in 2020, one in 2021 and 159 in the first five months of this year for “acts or omissions in contravention of environmental laws,” according to public information requests submitted by IPS.

Profepa oversees the megaproject through its “Mayan Train Inspection Program, in the areas of environmental impact, forestry, wildlife and sources of pollution”, the results of which are unknown.

In December last year, the agency carried out an inspection of hazardous waste generation and management in the southern state of Chiapas, which, together with the states of Campeche, Quintana Roo, Tabasco and Yucatán, is part of the route for the railway.

In addition, in June and July, two other visits were made to verify measures to mitigate pollutant emissions and waste management. Profepa is still analyzing the results of these visits.

The environmental prosecutor’s office has carried out exploratory visits in nine municipalities of section 2, eight of section 4 and 16 of section 5. The laying of lines 6 and 7 began last April, but the agency has not yet inspected them. The megaproject consists of a total of seven sections, which are being built in parallel.

The TM, to be built by the governmental National Tourism Fund (Fonatur), will cover some 1,500 kilometers, with 21 stations and 14 stops, according to López Obrador, who is heavily involved in the project and is its biggest supporter.

To lay the railway, whose trains will transport thousands of tourists and loads of cargo, such as transgenic soybeans, palm oil and pork, 1,681 hectares of land will be cleared, involving the cutting of 300,000 trees, according to the original environmental impact study. The laying of sections 1, 2 and 3, which require 801 hectares, began without environmental permits.

The government sees the megaproject as an engine of social development that will create jobs, boost tourism beyond the traditional tourist attractions and bolster the regional economy, which has sparked controversy between its supporters and critics. 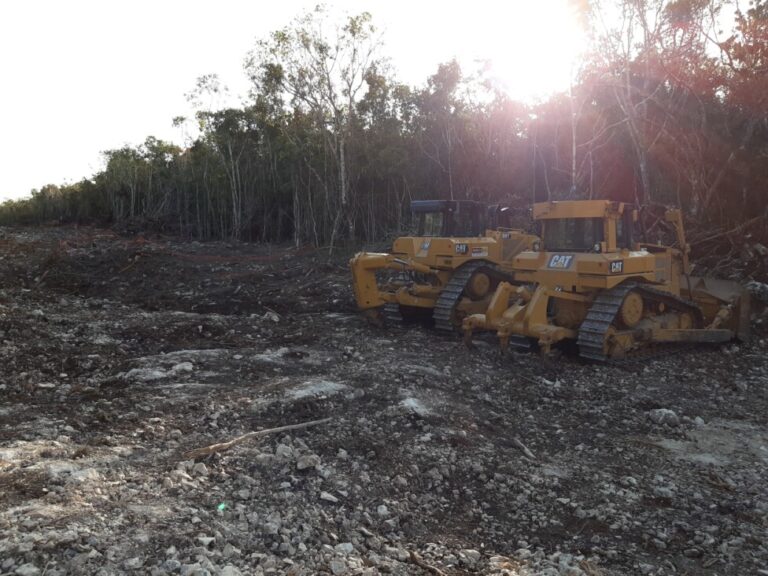 The construction of the Mayan Train has involved logging in several jungle areas in southeastern Mexico. The photo shows a breach opened by a backhoe on the outskirts of Playa del Carmen, in the state of Quintana Roo, in March 2022, without the required intervention by the environmental prosecutor’s office. CREDIT: Emilio Godoy/IPS

In November of last year, López Obrador, who wants trains running on the peninsula by the end of 2023, classified the TM as a “priority project” by means of a presidential decree, thus facilitating the delivery of environmental permits. On Oct. 25 the president promised that the test runs would begin next July.

“Some of the early complaints could be filed for works where permit exemptions were issued because they were done on existing rights-of-way. But if it decides not to act, it has to argue that decision. The environmental prosecutor’s office will not have a particular interest in approving government works,” he told IPS.

In its authorizations, Semarnat ruled that Fonatur must implement programs for integrated waste management, soil conservation and reforestation, air quality monitoring, flora management and rescue and relocation of wildlife.

Profepa must supervise that these measures comply with the General Law of Ecological Balance and Environmental Protection, in force since 1988 and which environmentalists say has been violated.

López Obrador denies that there is deforestation, and promised the construction of three natural parks in eastern Quintana Roo and the reforestation of some 2,500 hectares in the vicinity of the railroad route.

In a tacit acknowledgement of logging in the project area, the Ministry of National Defense will plant trees, at a cost of 35 million dollars, according to an agreement between Fonatur and the ministry contained in the massive leak of military emails made by the non-governmental group Guacamaya and consulted by IPS.

“They had already deforested without an environmental impact assessment, which is a crime. We are not surprised, because it is part of the dynamic that has characterized the Mayan Train: illegalities, omissions, false information, violation of procedures. There is a conflict of interest because Profepa answers to Semarnat,” she said.

The international non-governmental organization has found “insufficient, false and inaccurate” information on sections 5, 6 and 7, so it is not possible to assess the dangers and damage to local populations and ecosystems. 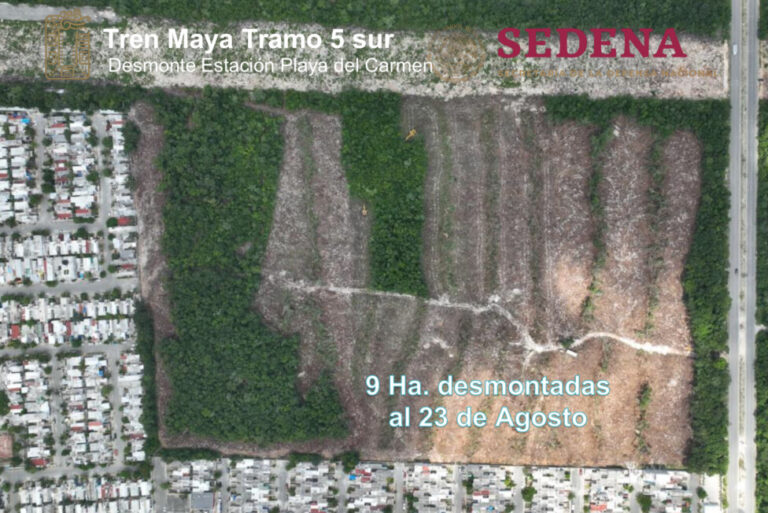 Parts of the jungle of the Yucatan peninsula, in southeastern Mexico, have been cut down to make way for the construction of the Mayan Train. But the environmental prosecutor’s office, failing to comply with its legal duty, has turned a deaf ear to complaints of alleged ecological crimes. CREDIT: Guacamaya Leaks

The project is a paradox, because while the government promises sustainable tourism in other areas of the peninsula, it threatens the very attractions of this influx of visitors, such as the cenotes – deep, water-filled sinkholes formed in limestone – cave systems and the entire ecosystem in general.

The TM endangers the largest system of underground and flooded grottoes on the planet, a complex of submerged caves beneath the limestone terrain.

The porous (karst) soil of the peninsula sabotages the government’s plans, as it has forced Fonatur to change the route of the megaproject several times. For example, section 5 has experienced three modifications between 2021 and January 2022.

Faced with the wave of impacts, the last hope lies in organization by local residents, according to the Mayan activist Uc.

But attorney Del Razo and environmentalist Mendoza said the courts are the last resort.

“The judiciary continues to be the most independent branch of power in Mexico. Interested parties could seek injunctions that order Profepa to correct the process. A strategy of specific details is needed to demonstrate the infractions. The effective thing is to go into the details of the challenges,” explained Del Razo.

Mendoza said there is a lack of access to information, respect for public participation and environmental justice.

“Profepa should have stopped the works for the simple fact of not having the environmental authorization when the removal of vegetation began,” she said. “We don’t see it as likely that it will seek to stop the construction, because we have seen its reaction before. Semarnat supports the project, regardless of the fact that it has failed to comply and is in contradiction with the laws.”

While its opponents seek to take legal action, the TM runs roughshod over all obstacles, which are dodged with the help of the Environmental Prosecutor’s Office, at least until now.