The past is never dead. It's not even past.
William Faulkner 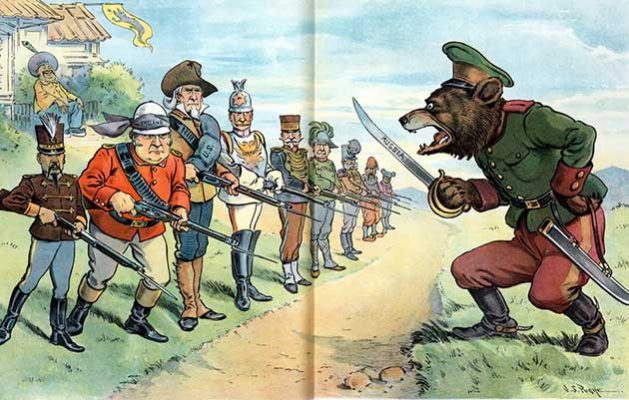 STOCKHOLM, Nov 16 2022 (IPS) - Like most armed conflicts the Ukrainian war intends to establish hegemony over a certain area, in rivalry with other usurpers. Russian propaganda pinpoints the US and EU as Russia’s main adversaries, while Ukraine is portrayed as a pawn in these nations’ international yearnings. Such a scenario is not new.

The Great Game was a political and diplomatic confrontation between British – and Russian Empires, which continued for most of the 19th and parts of the 20th centuries. Britain’s role was eventually taken over by the US. The Great Game mainly affected Mesopotamia (Iraq), Persia (Iran), and Afghanistan, though it had, and still has, repercussions on a wide range of neighboring territories.

Britain originally feared that the Russian Empire’s ultimate goal was to dominate Central Asia and reach the Indian Ocean through Persia, thus threatening Britain’s Asian trade links and its domination of India.

Britain posed as the World’s first free society, declaring its adherence to Christian values, respect for private property, and democratic institutions. Claims bolstered by an advanced industry, fueled by steam power and iron, as well as an ever increasing use of oil. English leaders assumed their nation had a God-given task to spread “civilization” and that such a worthy cause permitted them to exploit the earth’s natural resources, as well as the world’s labor force. Similarly to the Brits, the Russians, the Yankees, and the French considered themselves to be “civilizing forces”.

The quest for dominion was carried out in a traditional manner – pitching internal fractions against each other and let them do most of the fighting. Nevertheless, this strategy eventually led to direct clashes between “world powers”. Britain strived to convince the Russian army that it did not have a chance against the British war machine. The UK, France and Italy felt threatened by a growing influence of Germany and the Austro-Hungarian and Russian Empires. Accordingly, these nations supported an increasingly weakened Ottoman Empire, intending it to remain a buffer zone blocking Russia’s expanding war fleet from the Mediterranean Sea and the Indian Ocean.

As part of this policy, Britain and France provided arms and money to anti-Russian insurgents in Chechnya, thus contributing to an enduring tradition of Chechen terrorism against Russia. After a minor scuffle between the Russian – and Ottoman Empires, Russia occupied the Principate of Wallachia (Romania), prompting France and Great Britain to attack Crimea with a huge military force.

The Crimean War (1853-56) proved that the Tsar’s army was no match for the allied forces. Russia was humiliated and its expansion towards the European mainland and meddling in Persia and Afghanistan were halted. Instead people living on the steppes of Central Asia and Siberia continued to be subdued and forced to join the Russian Tsardom.

The Crimean disaster had exposed the shortcomings of every institution in Russia – not just the corruption and incompetence of the military command, the technological backwardness of the army and navy, or the inadequate roads and lack of railways that accounted for the chronic problems of supply, but the poor condition and illiteracy of the serfs who made up the armed forces, the inability of the serf economy to sustain a state of war against industrial powers, and the failures of autocracy itself.

The meddling of imperialists in other nations’ affairs was gradually worsened by efforts to secure fossil fuels for their own benefit. Refined petrol was originally used to fuel kerosene lamps and became increasingly important when street lighting was introduced. After 1857, oil wells drilled in Wallachia became very profitable, inspiring a search for new oilfields in the east. In 1873, the Swede Robert Nobel established an oil refinery in Azerbaijan, adding Russia’s first pipeline system, pumping stations, storage depots, and railway tank cars. At the same time, Calouste Gulbenkian assisted the Ottoman government to establish the oil industry in Mesopotamia. Gulbenkian eventually became the world’s wealthiest man.

Profit from these endeavors increased through assembly-line mass production of motor vehicles, introduced by Henry Ford in 1914. However, the main reason for gaining control of oil was belligerent. The English First Lord of the Admiralty, Winston Churchill, realized that if the British navy was fuelled by oil, instead of coal, it would be irresistible: “We must become the owners or at any rate the controllers at the source of at least a proportion of the supply of natural oil which we require.” In 1914, Churchill feared that this could be too late – the Germans were already on their way to conquer the Middle Eastern oil fields. Together with the Ottomans they were finishing the Berlin-Baghdad railway line, which would it make possible for the German army to transport troops to the Persian Gulf and onwards to Persian oilfields.

Germany and its allied Ottoman Empire lost World War I and the Berlin-Baghdad railway never reached the Persian Gulf. In accordance with the so-called Sykes-Picot Agreement Arab territories of the former Ottoman Empire were divided into French and British “spheres of influence”. In 1929, the newly formed Iraq Petroleum Company (IPC), a joint endeavor of British, French and American oil interests, brokered by Gulbenkian, received a 75-year concession to exploit crude oil reserves in Iraq and Persia, and eventually in what would become the United Emirates.

Access to oil continued to be a major factor in World War II. The German invasion of USSR included the goal to capture the Baku oilfields, which had been nationalized during the Bolshevik Revolution. However, the German Army was defeated before it reached the oil fields.

The Germans had pursued a relatively benign policy towards the USSR’s Muslim population of Caucasus and neighboring areas. This was after the war taken as an excuse for Stalin’s treatment of “treacherous ethnic elements”. Forced internal migration had begun already before the war and eventually affected at least 6 million people. Among them 1.8 million kulaks, mainly from Ukraine, who were deported from 1930 to 1931, one million peasants and ethnic minorities were driven from Caucasus between 1932 to 1939, and from 1940 to 1952, a further 3.5 million ethnic minorities were resettled.

Nearly 8,000 Crimean Tatars died during these deportations, while tens of thousands perished subsequently due to the harsh exile conditions. The Crimean Tatar deportations resulted in the abandonment of 80,000 households and 360,000 acres of land. From 1967 to 1978, some 15,000 Tatars succeeded in returning legally to Crimea, less than 2 percent of the pre-war Tatar population. This remission was followed by a ban on further Tatar settlements.

In 1944, almost all Chechens were deported to the Kazakh and Kirgiz Soviet republics. Accordingly, the Russian presence in Caucasus and Ukraine increased and so was Russian control of these areas’ natural resources, including wheat, coal, oil and gas.

After World War I, Britain had first tried to halt the Bolshevik penetration of Iran and did in 1921 support a coup d’état placing the UK-friendly general Reza Shah as leader of the nation. When Britain and USSR eventually became allies against Nazi Germany they did together attack Iran and replaced Reza Shah with his son Mohammad Reza Pahlavi. Reza Shah had become “far too Nazi-friendly.”

Following a 1950 election, Mohammad Mosaddegh became president of Iran. He was committed to nationalize the Anglo-Iranian Oil Company, AIOC (successor of the IPC mentioned above). In a joint effort the Secret Intelligence Services of the UK and the US, MI6 and CIA, organized and paid for a “popular” uprising against Mosaddegh, though it backfired and their co-conspirator, Mohammad Reza Pahlavi, fled the country. However, he did after a brief exile return and this time a coup d’état was successful. The deposed Mosaddegh was arrested and condemned to life in internal exile.

Mosaddegh’s internally popular effort to remove oil revenues from foreign claws inspired other Middle East leaders to oppose Britain and France. In 1956, the Egyptian president Nasser nationalized the Suez Canal Company, primarily owned by British and French shareholders. An ensuing invasion by Israel, followed by UK and France, aimed at regaining control of the Canal, ended in a humiliating withdrawal by the three invaders, signifying the end of UK’s role as one of the world’s major powers. The same year, USSR was emboldened to invade Hungary, quenching a popular uprising.

In 1960, the Organization of the Petroleum Exporting Countries (OPEC) was founded in Baghdad. This was a turning point toward national sovereignty over natural resources. The US Iranian protégé, Mohammad Reza Pahlavi, eventually came to play a leading role in OPEC where he promoted increased prices, proclaiming that the West’s “wealth based on cheap oil is finished.” The US was losing its ability to influence Iranian foreign and economic policy and discretely began to support the religous extremist Khomeini, who initially claimed that American presence was necessary as a counterbalance to Soviet influence. However, after coming to power in 1979 Khomeini revealed himself as a fierce opponent to the US. The US and some European governments thus ended up supporting the brutal Saddam Hussein’s war on Iran. The Iraqui leader, heavily financed by Arab Gulf states, suddenly became a ”defender of the Arab world against a revolutionary Iran.” The war ended in a stalemate,with approximately 500,000 killed.

Ukraine is one last example of how a country has ended up in a siutaion where a superpower use its military force to impose its will upon it, while implying that other nations have similar intentions. Times are constantly changing and hopefully Russia will realise, like the UK once did, that it cannot maintain its might and strength through armed invasions, but instead have to rely on diplomacy and peaceful negotiations.

Russia seems to be stuck in a time capsule where foreign greed and meddling in other nations’ internal affairs resulted in ruthless wars and immense human suffering. As the German philosopher Hegel stated in 1832:

What experience and history teach is this — that people and governments never have learned anything from history, or acted on principles deduced from it.