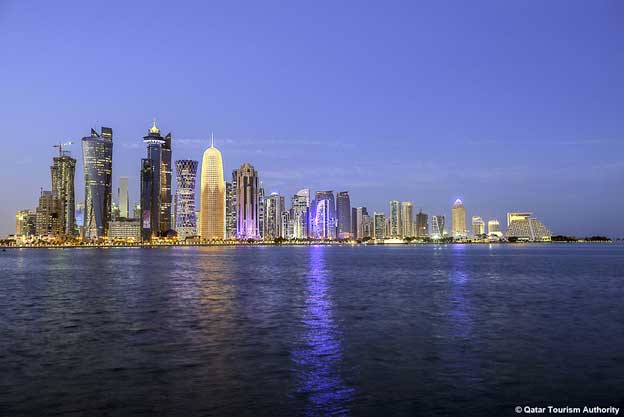 DOHA, Qatar, Nov 25 2022 (IPS) - The sun is shining, and the temperature sits at an idyllic 28 degrees Celsius. The Uber driver taking me to work is from Pakistan and devastated about the recent loss to England in the T20 Cricket World Cup final in Australia.

On route to the office, I stop to get a coffee and the barista is from Gambia, the server from Uganda and the cashier from Nigeria. They all smile and greet me as I travel through the line. As I enter the office, I am greeted by the Indian and Bangladeshi security guards and then pass the Filipino, Togolese and Algerian cleaning staff who are preparing for the rush of staff on what will undoubtedly be a busy morning.

The world’s real melting pot is not London, Melbourne or Los Angeles. It’s here in the Middle East. The representation of cultures here in Doha dwarfs anything outside of the Arab Gulf and many are here for the prospect of work and the opportunity brought about by the ongoing FIFA World Cup in Qatar.

As an underlying groundswell of xenophobia has permeated through much of the world – the Global West has shut its borders, limited migration and made the process of entering, let alone working, more difficult – Qatar has opened its doors. The people working here are searching for a way to improve the situation for their families.

Many are from some of the poorest places on the planet where the people are most in need. The media have filled newspapers and TV screens with negative stories about Qatar, a country they have never visited and a culture they have never experienced.

When the majority have turned their backs on these poorer countries, could the conversation surrounding workers for this World Cup not have been about opportunity? About the incredible impact and lasting legacy, the jobs generated here will have on families and communities across the globe? About the dissemination of wealth back to the areas and communities who really need it?

For decades the world has shifted industry towards regions that can provide cheaper labour. The movement of whole sectors to Asia and the sub-continent have kept many organizations afloat. This was seen as a creative way to save money, drive higher dividends for shareholders and keep prices low for consumers despite the effect it would have on local jobs.

This paradigm is alive and well. Salaries and wages are much lower in Eastern European countries like Poland, Hungary or Bulgaria than in countries like Germany, Austria or France. In many cases, this has led companies based in Western Europe to build subsidiaries in Eastern Europe to take advantage of lower labour costs. Western European economies heavily depend on working migrants from the East earning low wages and working in poor, unregulated conditions. That isn’t particularly controversial in Europe.

The same can be said for Eastern European countries who replace the workforce that has departed with workers from Central Asian countries such as Kyrgyzstan, Uzbekistan and Kazakhstan. So, for all the outrage and condemnation that has been aimed at Qatar, a quick google search would show the very thing they are advocating against is happening under their own nose.

Uniting instead of dividing

However, hypocrisy is not limited to Europe. Australia, for example, became the first 2022 World Cup team to release a collective statement against Qatar’s human rights record, compiling a video message critiquing the World Cup host’s treatment of migrant workers. It may surprise those individuals to learn that Australia’s track record on human rights is not exactly squeaky clean.

More than 40 nations at the UN Human Right Council, including Germany, South Korea and the USA, have questioned Australia’s policies toward asylum seekers and refugees. Among the issues raised are Australia’s continued use of offshore processing and prolonged detention for asylum seekers.

The council accuses the Australian government of not following through on some of its key past pledges and of still subjecting refugees to immense harm.

The World Cup in Qatar is the 22nd iteration of the international tournament which was first held in Uruguay in 1930. In the 92 years since, the ‘world game’ – despite its interest across the globe – has held 15 out of 20 World Cups in Europe and South America.

Five nations have already hosted the event on more than one occasion. An incredible concentration given the participation and interest. This time things are different. The world game is branching out and reaching a new audience.

The World Cup in Qatar represents the first major sporting event in the Arab and Muslim world. The impact will not just be felt amongst the 2.7 million population of Qatar, or even across the 475 million people who call the Middle East home. This event will resonate with the 1.9 billion Muslims across the globe.

From Indonesia to Morocco, the Maldives to Egypt, roughly one quarter of the world’s population, who in almost 100 years of World Cup football have been in the background, will be front and centre.

If the focus of the next four weeks can be the incredible football played on the pitch, the generosity and kind-hearted nature of the hosts and the collective joy that bringing cultures, religions and people together – not just those from Europe and South America – this World Cup may end up being a turning point for a truly world game.

They say that World Cups are a life-changing experience for the players and teams that compete in them, and even more so for the winner. However, for this World Cup, for the first time in history, the real winners won’t be on the pitch at Lusail Stadium on December 18.

They’ll be behind the scenes, in the Ubers, coffee shops and security points across the country, taking the opportunity, the generational-altering opportunity, only the World Cup in Qatar was offering them.

Myles Benham is a Freelance Event Manager with 15 years’ experience working in Global Mega Events and is currently in Doha for the World Cup.

Read more on the debate around the FIFA World Cup.