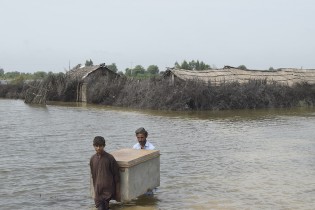 What Must COP27 Deliver?

By Felix Dodds and Chris Spence
Preparations for COP27 in November are proceeding apace and we are now well past the halfway mark between the preparatory meetings in June in Bonn and the start of the summit in Sharm El-Sheikh, Egypt. The agenda for Sharm El-Sheikh is complex and challenging. Furthermore, the meeting is taking place during a time of international turmoil. So, what are the factors influencing whether Sharm El-Sheikh can be a success? And what, exactly, does COP27 need to deliver?

By Felix Dodds and Chris Spence
UN Secretary General Antonio Guterres is absolutely right to call the latest UN climate report a “Code Red for Humanity.” Without immediate and serious action, we are condemning future generations to a dismal future.

By Felix Dodds
As some of you will know I have a new book out Stakeholder Democracy: Represented Democracy in a Time of Fear.  (other contributors to the book were:  Jan-Gustav Strandenaes, Carolina Duque Chopitea, Minu Hemmati, Susanne Salz, Bernd Lakemeier, Laura Schmitz, and Jana Borkenhagen).

Are Grants For Losers?

By Felix Dodds and Minu Hemmati
Mark Ritchie, former Minnesota Secretary of State and former president of the Minneapolis-based Institute for Agriculture and Trade Policy, sent Felix an email about a very interesting interview with Kevin Watkins, the CEO of Save the Children Fund (UK). The interview and commentary was by Russell Hargrave in devex: “Save the Children CEO on a new era of competition for aid”.

Wonder Woman Should STILL be a UN Ambassador

By Felix Dodds
I realize it’s a lot easier saying this now after the film of the same name has come out and has taken over $400 million in US box office receipts. It is at present taken the 8th most revenue for a super hero comic book ever.

By Felix Dodds
At the beginning of August, the High Level Independent Panel to Assess and Enhance Effectiveness of UN-Habitat came out with its report. Before commenting on the Panel Report I want to put up front that I know that a lot of the staff in UN Habitat do excellent work and its same they weren’t given a proper role in Habitat III.

By Felix Dodds
It’s been almost one year since heads of state and government adopted ‘Transforming Our World: The 2030 Agenda for Sustainable Development’ - the ambitious agenda which contains 17 sustainable development goals (SDGs) and 169 targets during a special session of the UN General Assembly on 25 September 2015.
ADVERTISEMENT ADVERTISEMENT